PADDOCK LAKE — Aside from your brain, your eyes are the most complex organs in your body. That's why it takes years of schooling to become a licensed optometrist. The FOX6 Investigators find a local eyeglass salesman is once again accused of practicing optometry without a license -- four years after the state ordered him to stop.

If there is one eye that seems to trouble Lee Hagopian the most, it is the public eye.

"I have some people that are not allowed in my business," he recently told a Kenosha County law enforcement dispatcher. "They've been banned from my business."

"Why were they banned?" the dispatcher asks.

"Because they put me on FOX6 News and they're standing out there with cameras!" Hagopian replied.

The FOX6 Investigators first exposed Hagopian in 2015 for doing eye exams without a license. Four years later, it appears he is still offering eye exams.

"If you got time, I got time," Hagopian told a FOX6 producer equipped with a hidden camera. 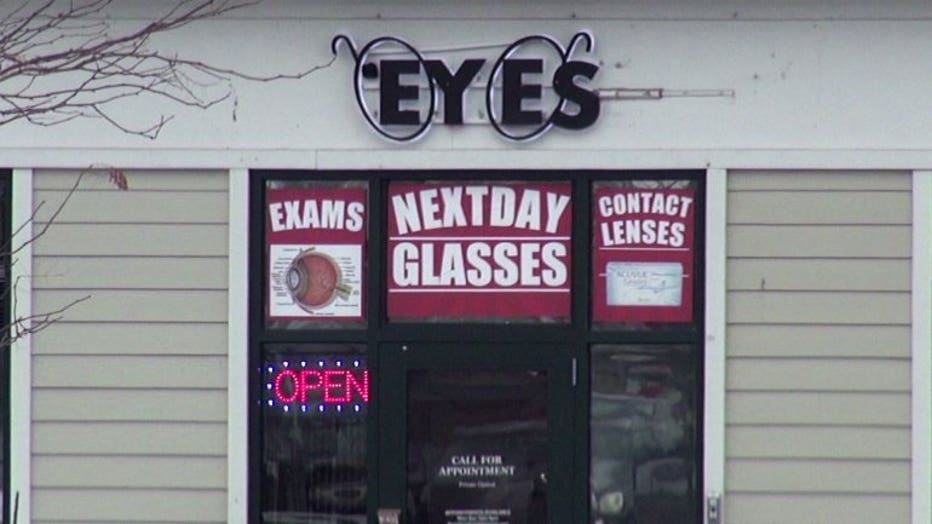 Hagopian is an optician, which requires no state license in Wisconsin, but does allow him to fill prescriptions for glasses and contacts. He is not an optometrist, which does require a state license from the Wisconsin Optometry Examining Board. Minimum license requirements include graduation from an accredited optometry school and passage of a three-part national board exam.

According to a complaint filed with the Wisconsin Department of Safety and Professional Services -- the agency that includes the Optometry Examining Board -- Jill Gillmore didn't know Hagopian was not an optometrist when she visited Next Day Glasses in Paddock Lake in mid-October.

"I thought I was at an eye doctor," Gilmore said. "It was a very traumatic experience."

But as a mother of seven children, she says her time is precious and Hagopian's optical shop was right next door to her bank.

"I was greeted at the door by Mr. Hagopian. I was brought into a separate room, I looked into a machine and he asked me to tell him when the picture in the machine was clear," Gillmore said.

She says Hagopian had her look into a machine, called an auto-refractor, to check her vision. 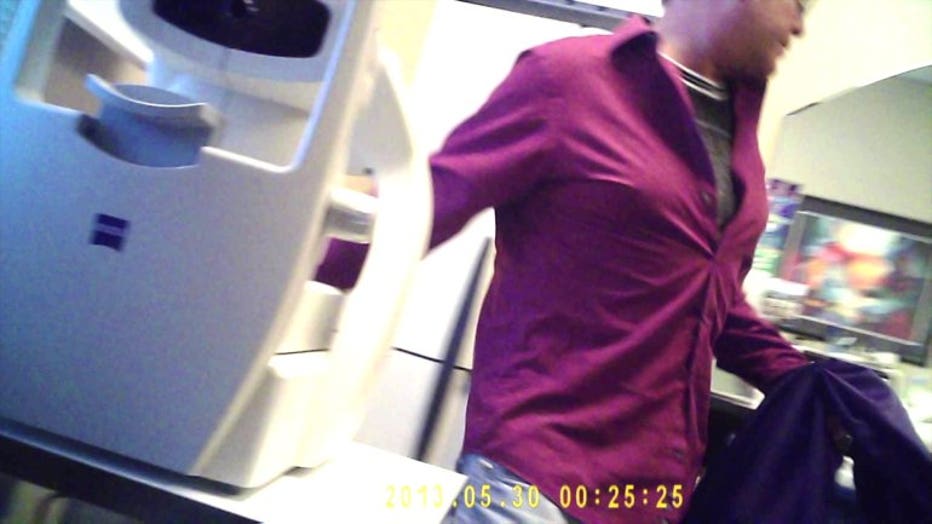 This is the machine Gillmore says Hagopian used to determine her corrective lens needs. She says she did not bring in a prescription from any other doctor.

"He made the statement, 'I am going to give you a stronger prescription for your right eye and you will like it,'" Gillmore said.

Gillmore bought two pairs of glasses and ordered 6 months worth of contacts. She says Hagopian sent her home with a pair of trial contact lenses in a plastic bag, but no instructions on how to put them in.

"I was hesitant because it was a first time experience with contacts," Gillmore said. 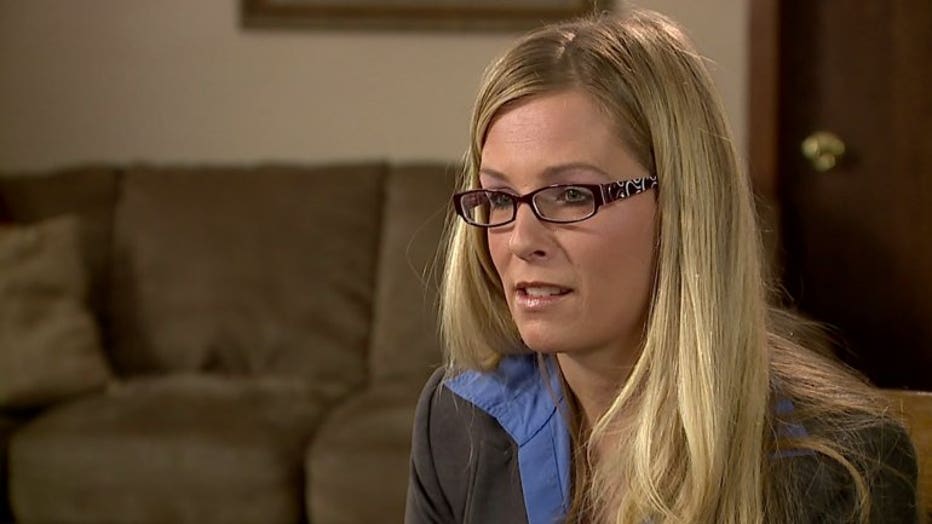 What happened next Gillmore says is unlike anything she's ever experienced.

"I took them out after 2 hours and my eyes were completely on fire," Gillmore said.

So she called Next Day Glasses.

"Now I have this burning pain in my eyes. He said, 'Well, I'm closed and I'm already at home.'"

That's when she noticed the contacts Hagopian had sold her expired eight years ago. 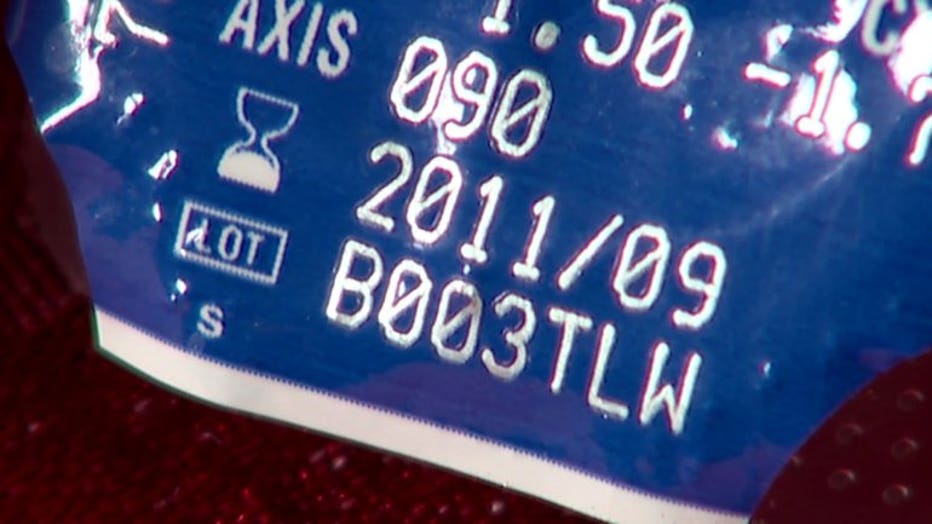 The trial contacts Gillmore claims Hagopian sent her home with were expired. One lens expired in 2011, the other in 2012.

"That night was a long night for me," Gillmore said.

The next day, Gillmore went to see Dr. Travis Been, a licensed optometrist just across the Illinois border.

"There's a whole host of bad things that can happen to your eyes when put a lens that old in your eye," said Dr. Been with Antioch Eye Care. "She kind of didn't know who to trust at that point."

Shortly before her appointment with Dr. Been, Hagopian left Gillmore a voicemail, saying her discomfort was probably just allergies.

"So you were right by doing the Benadryl," Hagopian said in the message. "What we need to do is flush your eyes with non-preservative eye drops, which I can give you for free."

Dr. Been found something more serious under a slit lamp microscope. 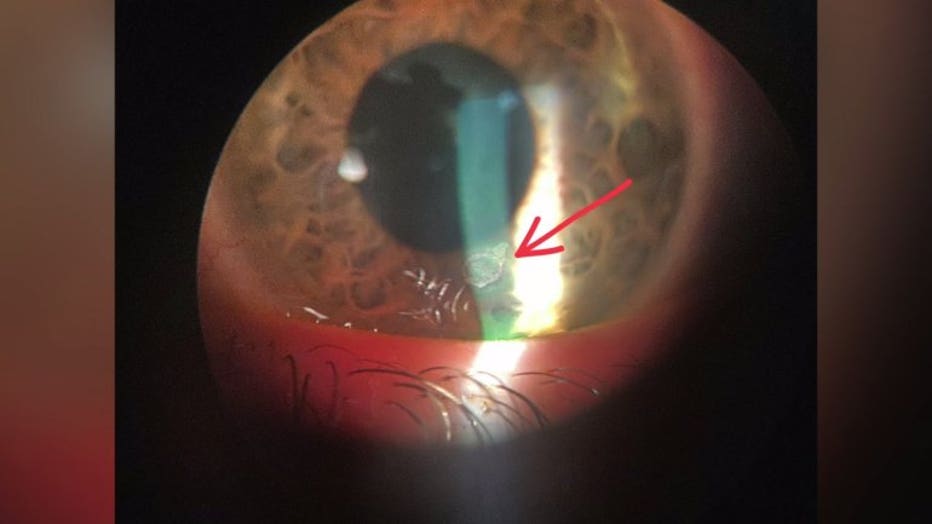 Dr. Travis Been used a slit lamp microscope to examine Gillmore's eye the day after she visiting Hagopian and received the expired contacts. He found an injury to her cornea. Dr. Been says this could have been caused by old contact lenses or Gillmore

"It was a corneal abrasion," he said.

In other words, Gillmore had an injury to the surface of her eye.

"Maybe she did it with a fingernail as she was putting the lens in? But, either way, she wasn't really trained on how to insert and remove the contacts," Dr. Been said.

"Apparently, they're supposed to teach you how to put them in your eye," Gillmore said.

Instead of instructing her how to safely insert contact lenses, Gillmore says Hagopian merely gave her pair of really old trial contacts that didn't even come in a box.

"It's potentially very harmful to the patient," said Dr. Been, who also says Gillmore is not the first person to tell his staff they had issues with Hagopian.

"Our biggest concern is that somebody could lose vision," he said.

And she's certainly not the first to complain to state regulators or FOX6 News.

"I asked him flat out, are you a doctor? And he told me yes," Lisa Hawkins, former patient, said in a 2015 interview with FOX6 Investigator Bryan Polcyn.

"He wore the lab coat. He was the only person in there," said Samantha Gerrits, another Hagopian customer, in a 2015 interview.

"It was just him in the office," said Shannon Hahn, at that same time.
"Nobody else was there?" Polcyn asked.
"No one else was there,'" Hahn said.

"You're impersonating a doctor," Lisa Hawkins said at the time.

"I don't want to talk to anybody when it comes to that," Hagopian said to a FOX6 producer wearing a hidden camera inside Eye Xams, an optical shop Hagopian operated in Kenosha at the time.

In April of 2015, the FOX 6 Investigators obtained complaint records against Hagopian dating back to 1994.  Two weeks later, the state ordered him to stop practicing optometry without a license. The Wisconsin DSPS warned that if he did it again he could be referred for possible criminal charges.

But when we showed up at his office last month, Hagopian denied doing eye exams for Gillmore or anyone else. And when the FOX6 Investigators entered his shop with a camera in plain sight to ask questions, he yelled responses from behind a closed door.

"You need to speak with my lawyers," Hagopian said.
"I'd like to know to why you are still doing exams after all these years," Polcyn said.
"I'm not doing exams. Alright, that's it," Hagopian said, just before calling Kenosha County law enforcement to the scene.

"They're threatening my business is what they're doing," Hagopian said in a police recording obtained by the FOX6 Investigators:

"He is doing a fine job of that himself," Gillmore said.

The Kenosha County deputies who responded say their hands are tied. 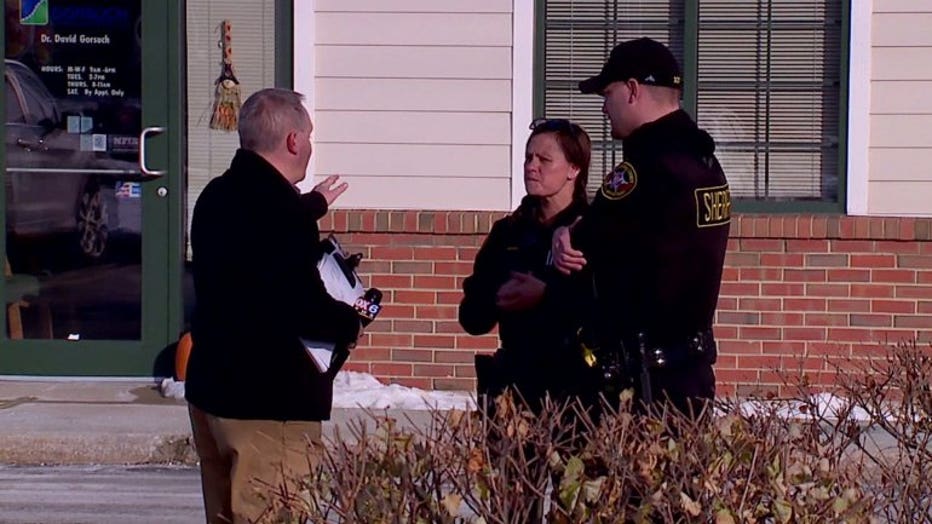 A pair of Kenosha County Sheriffs Deputies responded when Hagopian called to complain that FOX6 News wanted to put him on TV.

"If he were to be impersonating a police officer," Polcyn said.
"Oh absolutely," the deputy interceded. "That's a clear cut crime."

Gillmore just wants it to stop before someone else gets hurt.

"I don't want anybody else to experience what I experienced," she said. "If criminal charges are what will stop him from possibly injuring or hurting someone else, then yes."

Last month, the FOX6 Investigators requested records from DSPS related to Jill Gillmore's complaint. On Friday, the state released them.

The agency says there is "sufficient evidence" to find "probable cause" that Lee Hagopian has violated the 2015 order to stop practicing optometry without a license. DSPS has now referred the case to the Kenosha County DA for a review of "possible criminal charges."

Graveley declined to comment to FOX6 News, but in an email to State Representative Samantha Kerkman's office, he called Hagopian's conduct 'outrageous.'

Hagopian has not made any direct statements to FOX6 News since our attempt to speak with him inside Next Day Glasses in mid-November. However, on Friday, December 6th, FOX6 News received a letter from his attorney.

It says Hagopian denies all of Gillmore's allegations. He denies giving her any contact lenses or eye drops. And he denies that he gave her an eye exam.