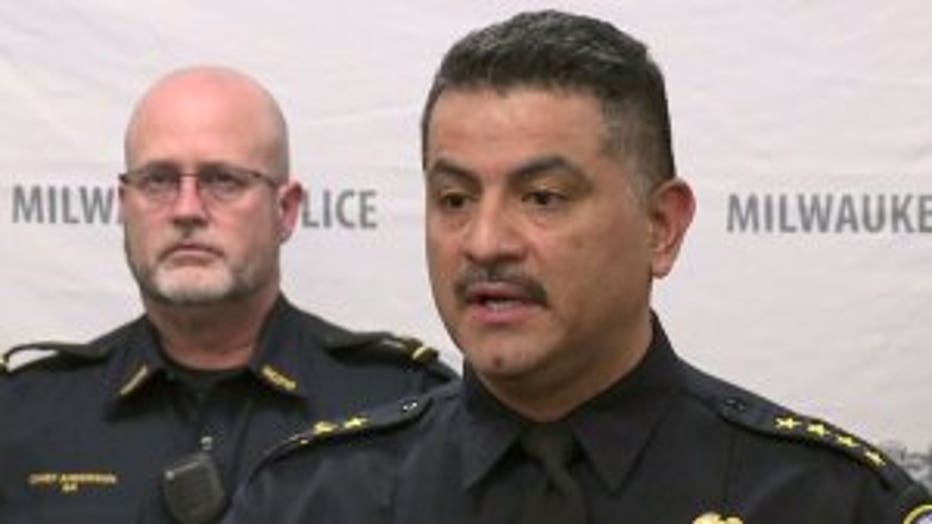 MILWAUKEE -- Milwaukee Police Chief Alfonso Morales offered a review on Thursday, Jan. 3 of the accomplishments of the Milwaukee Police Department (MPD) in 2018 -- and then outlined his goals for the year ahead.

"The city is safer than it was a year ago," Morales said in the Thursday afternoon news conference. 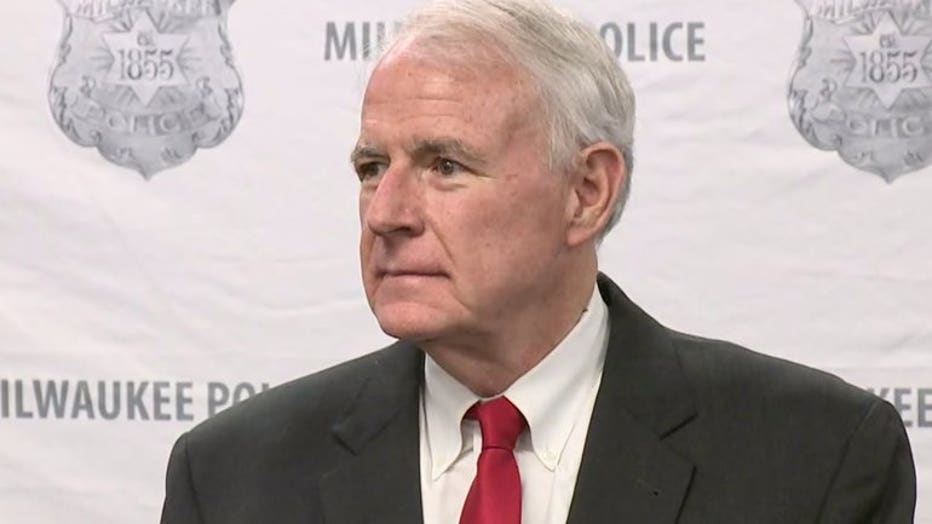 Morales was appointed by the Fire and Police Commission in April 2018 -- and faced a number of challenges in 2018. Data shows homicides and non-fatal shootings were on the decline in 2018. The same was true of carjackings.

"After being double digits in carjackings through the spring, we finished the year with a seven percent decrease from 2017," Morales said.

The chief put 100 more officers on the streets. Under his leadership, the department joined the Suburban Violent Crimes Task Force.

"I promised you transparency," Morales said. "And starting in October, I instituted a policy that we will provide community briefings to show the public relevant body camera video and other evidence for officer-involved shootings within 45 days of the incident and before any charging decisions have been made. We have now released three community briefings."

The challenges for the MPD in 2019 include tackling the violent crimes plaguing certain Milwaukee neighborhoods -- and Morales asked for the public's support in the new year.

"I ask everyone of you to take ownership in making Milwaukee a safer city," Morales said.

I was appointed Chief of Police for the City of Milwaukee on February 16, 2018. As a native of Milwaukee and a 25 year veteran of the Milwaukee Police Department, I remain humbled and grateful for the opportunity to be your Chief. I also knew that we were facing many challenges.

When my administration began, we were already dealing with an ACLU lawsuit, a high profile tasing incident and a spike in violent crime. During the first two months of 2018, District #2 was already up 100% in homicides, District 3 was up 100% in nonfatal shootings and we were up 44% overall in carjackings. At the time, I had a skeleton executive team with numerous vacancies to fill. We had our work cut out for us.

It was time for organizational change. I reallocated an additional 100 officers to patrol the streets. I created our shoot review, where we partner with other law enforcement agencies, state and federal prosecutors and the department of corrections to review the individuals involved in homicides and non-fatal shootings to ensure successful apprehension and prosecution of offenders while focusing on prevention and intervention strategies. We joined the Suburban Violent Crimes Task Force. I engaged in a multi-prong reckless driving initiative, including creating a reckless driving taskforce, adding speed boards throughout the city, implementing a marketing campaign and participating in an enforcement mission with the sheriff’s department and the state patrol known as the reckless driving reduction initiative. I created our Special Investigation Division to focus on fugitive apprehension, executing search warrants and conducting specialized investigations related to drugs and guns.

At the district level, I gave our captains autonomy to focus on issues and develop solutions unique to their neighborhoods, including a targeted focus on carjackings. Our officers engaged in exciting new partnerships with neighbors, community organizations and faith-based organizations to develop synergies that served as force multipliers in reducing crime and improving police-community relations.

I promised you transparency. And starting in October, I instituted a policy that we will provide community briefings to show the public relevant body camera video and other evidence for officer involved shootings within 45 days of the incident and before any charging decisions have been made. We have now released three community briefings.

Together, in partnership with our community, law enforcement and governmental partners, we have seen a marked decrease in crime this past year. Our homicides have decreased 16%, from 119 in 2017 to 100 in 2018 (and nearly 30% from the 142 homicides in 2016). Our nonfatal shootings have dropped 15% from 558 in 2017 to 475 in 2018, our first time below 500 nonfatal shootings in eight years. We received 2,138 less shots fired alerts in ShotSpotter areas, a 24% decrease. After being up double digits in carjackings through the spring, we finished the year down 7% from 2017. Our joint reckless driving reduction initiative resulted in 3,309 traffic citations. Our non-pursuits are down 67%. Since its inception in March 2018, Special Investigation Division has arrested 761 adults, executed 109 search warrants, and seized over $322,000 related to drug activity. It has also recovered over 6,000 grams of heroin, over 1,100 grams of crack and cocaine, and over 300 grams of fentanyl. These arrests have led to 357 individuals being criminally charged. Milwaukee is a safer city today than it was this time last year. In 2018, we recovered 141 more guns than last year and the 2,490 evidence guns we recovered were 70 more than the total amount of guns we recovered in all of 2016.

While I am proud of these accomplishments, it is not lost on me that many of these numbers represent not just victims, but also family members, friends and loved ones of victims who will forever be impacted by these crimes. No homicide or nonfatal shooting or reckless driving accident or drug deal is acceptable. While we remain data driven, the Milwaukee Police Department is not in the business of simply reducing crime numbers. We are in the business of improving your public safety, protecting your children and families, and investigating crimes that bring justice to you and your loved ones.

To the many departments within the city, county, state and federal government that play a major role in limiting crime, thank you. To the countless nonprofit, for-profit and religious organizations that support a safer Milwaukee directly or indirectly, thank you. To my officers, you are living, breathing heroes that risk your lives every day to better this great city, thank you.

I am confident that together we will make 2019 even safer than 2018. We are your police department and I am your Chief. God bless and happy New Year. Thank you.