The legislature green lights the expansion of the long-stalled I-94 East-West corridor. Former Governor Walker stopped it, then Governor Evers revived it. But state law says he needs legislative approval to spend money on the project.

MILWAUKEE COUNTY, Wis. - The Wisconsin Legislature green lights the expansion of the long-stalled I-94 East-West corridor. Former Gov. Scott Walker stopped it, then in 2020, Gov. Tony Evers revived it. But state law says the Wisconsin Department of Transportation needs legislative approval to spend money on the project. That could come if the governor signs the budget the legislature passed.

The proposed I-94 East-West expansion will add lanes from the Marquette to Zoo Interchanges, a roughly 3.5 mile stretch of the interstate, which Gov. Evers says is one of the most congested and dangerous roads in the state. WISDOT adds that the stretch has twice as many crashes as the average of similar roads in the state.

The department says the goals of the project are to "improve safety, replace aging infrastructure (originally constructed in the 1960s) and reduce congestion."

The governor's budget proposal asked for $40 million in bonding for the expansion project, which the legislature kept in the budget they approved this week and will send back to him for his signature.

"So many people use the I-94 East-West, to travel for work, for leisure, and even to transport their goods across our state," said State Rep. Jessie Rodriguez (R-Oak Creek). "So, this is an economic development for our area. Many times, a lot of businesses in my region have said we locate to certain areas, because we want to make sure there’s access to good transportation freeways, and this is in line with that initiative."

However, many of Evers' fellow elected Democrats in Milwaukee oppose the expansion, and some groups are trying to put the brakes on the project. 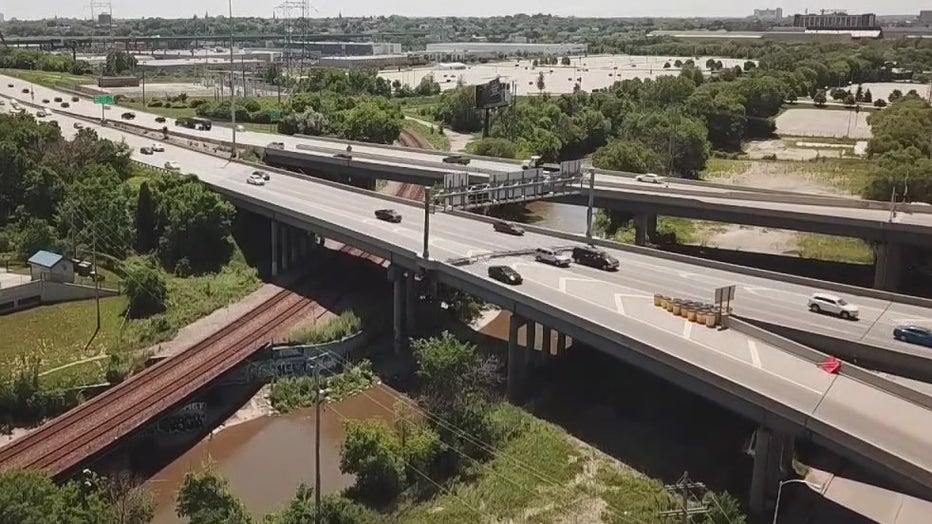 "I believe the universe has changed due to COVID-19 and by that, I’m referring to the success of work at home," said Gerard Froh of the Story Hill Neighborhood Association. "Repairing it is certainly necessary, but I don’t think the expansion is justified."

"There could be better use for those investments in our communities. We don’t have enough that has been funded in public transportation in local communities and so that's been divested over the years," said Lisa Jones of MICAH (Milwaukee Inner-city Congregations Allied for Hope).

"We have Milwaukee residents who do not drive cars." added Jones. "And I think that’s where we need to see that as an equity issue, that we are making an assumption that everyone has a car, and that’s not necessarily true."

On the other side, Assembly Speaker Robin Vos (R-Burlington) drives home the point that the project will help the city.

"The people who benefit the most are those who either live in Milwaukee that can work somewhere else in the suburbs, or the people from the suburbs who bring the money and spend it downtown in Milwaukee, that flows throughout the entire economy," added Speaker Vos.

If the governor approves this item in the budget, don’t expect construction any time soon. That’s because the Wisconsin Department of Transportation has ordered a supplemental environmental impact study. It's goal is to hear from the public, study issues like water runoff, and to see if the pandemic may have changed traffic patterns along this route. Wisconsin Secretary-designee of Transportation Craig Thompson says the earliest they could get final federal approval is late 2022.

Secretary-designee Thompson responded to FOX6's inquiry about the project:

WisDOT is currently working on a supplemental environmental impact study, which includes impacts to soil resources, noise, air quality, and water runoff. However, the most recent FHWA required conformity analysis in southeastern Wisconsin found improved air quality. The analysis included the I-94 east-west project with proposed modernization and additional capacity.

This administration believes in the importance of transit, which is why Governor Evers -- in the past two budgets -- proposed significant investments in Milwaukee County transit. While federal and state laws have specific limitations on use of funds for public transit, WisDOT is committed to investing in local road and bridge improvement projects, increasing investment in transit systems, and making it easier for communities to build bicycle and pedestrian facilities.

However, there are significant safety problems on this section of I-94. The infrastructure is nearing the end of its useful life and it does not meet current design and safety standards. We’ve seen crash rates decline dramatically in the modernized Zoo and Marquette interchanges. The aging east-west corridor is one of the most dangerous roads in the state. If we do not address these issues, crashes and congestion will continue to increase.

General Motors is recalling more than 380,000 older SUVs in the U.S., many for a second time, to fix a suspension problem.