How`d they do it? Specialized MFD team talks about rescue on power plant stack

How`d they do it? Specialized MFD team talks about rescue on power plant stack

MILWAUKEE (WITI) -- It was a dramatic rescue from nearly 300 feet in the air -- and it all unfolded over several hours in Milwaukee's Menomonee Valley on Monday, November 24th.

Five workers were doing routine emission testing on a massive stack at the We Energies Valley Power Plant.  But the elevator that brought four workers to a ledge stopped -- and one more worker was trapped inside.

Alonte is a member of the Milwaukee Fire Department's Heavy Urban Rescue Team (HURT). He was one of the firefighters that went up to rescue the man trapped in the elevator winding outside the stack. That worker was outside for hours in the cold.

"I think the thing that made a difference is the elements there. It was really cold, all your ladders are iced up and the wind. The wind was really kicking up there," said Luis Marquez who is also with the specialized rescue team.

"And we set up a rope system with pulleys and we dropped in the elevator, put a harness on the worker and hauled him up," said Alonte.

On another part of the power plant stack -- even higher -- four trapped workers were harnessed and secured with ropes before they climbed down. Video shows one of them carefully using rungs on the side of the stack. Each of the four came down the same way -- and then the firefighters followed.

The members of the HURT are familiar with the We Energies Valley Power Plant because it had trained there several times in the past year. 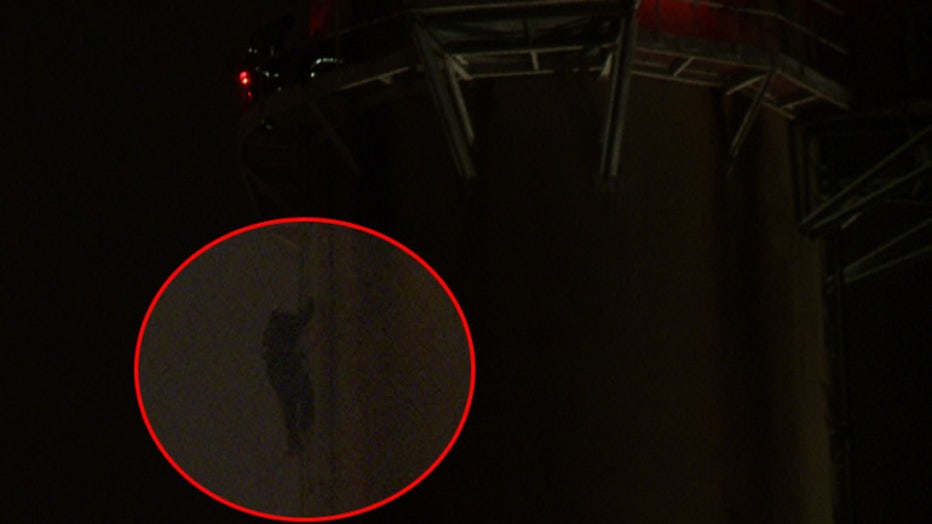 Over the weekend, the same team helped when a driver was trapped inside a car that accidentally met this fate in a parking ramp at the Potawatomi Hotel & Casino.

The firefighters say the trapped workers did a good job -- especially the man trapped in the power plant elevator.

"Once we got him harnessed up and got him going, he's pretty good. He crossed the ladder real well -- a little shaky but pretty good," said Alonte.

The firefighters tell FOX6 News they had to leave some of their ropes and pullies up on the ledge of the stack as they lowered themselves down. When the elevator is fixed, they hope to get all of the gear back.