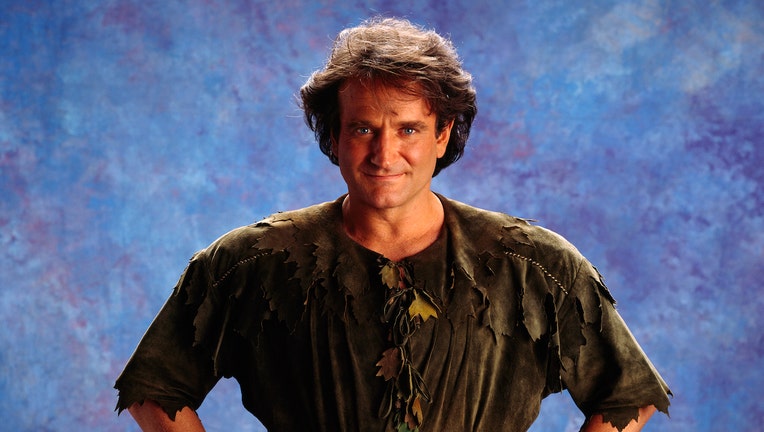 CHICAGO - "All children, except one, grow up."

When J.M. Barrie wrote that line — the opening for his 1911 novel "Peter and Wendy" — he was setting the stage for his best-known creation: Peter Pan, a boy who stayed forever young. Wearing clothes made of leaves, he soared through the air without the aid of fairy dust, crowing and swordfighting merrily. But it’s a sentence that rings true of one of Peter’s best-known interpreters, as well.

In Steven Spielberg’s "Hook" (1991), the great Robin Williams picked up the tights and tunic. He and the director sought to answer a seemingly simple question: What happens when the child who never grows up, grows up?

The answer, alas, wasn’t all that clear. Spielberg’s movie was largely panned at the time. Roger Ebert called it "a lugubrious retread of a once-magical idea" and wrote that its ending "would be embarrassingly excessive even for a movie in which something of substance had gone before." Yikes. But the great critic also had this to say:

Ebert’s not wrong about Bob Hoskins, but this praise understates how pivotal Williams is to the film, to its enduring popularity, and to the magic it possesses. You don’t need fairy dust (or flashy CGI) when you’ve got Robin Williams. He’s magical all by himself.

Williams plays Peter Banning, a career-obsessed executive whose life and personal history are overturned when the past sails in through his children’s bedroom window.

On a trip to London to see "Granny Wendy" (Maggie Smith), who took the orphaned Peter in as a child, Peter’s children Jack (Charlie Korsmo) and Maggie (Amber Scott) are abducted from their beds by a fiend who leaves ugly scars on the walls throughout Wendy’s home — scars that may have been left by a very sharp hook. The only hope for the young Bannings, Wendy tells Peter, is for him to remember who he really is. (You can probably guess the answer.)

Thus the grown-up finds himself soaring toward a child’s fantasyland, thanks to an assist from a frustrated Tinkerbell (Julia Roberts). But it’s not as simple as showing up at the Lost Boys’ hideout and saving the day. Peter has to find his way back to the child hidden inside him, conquering his fears, making amends with old friends and harnessing the considerable power of his imagination along the way — and of course he’ll have to face an old enemy (Dustin Hoffman) with a hook for a hand and a score or two to settle.

Spielberg’s bloated epic — at 142 minutes, it’s a bit long for a movie ostensibly aimed at children — is heavy on exposition and spectacle but spares little time for wonder or magic of the more lasting kind. Yet it never loses its way, thanks to the onetime lost boy at its center.

As Peter, Williams turns in a performance of remarkable warmth and depth. As Peter the overwhelmed dad and workaholic, Williams acts without vanity. Of all the relationships in the film, it’s easiest to connect with those between Peter and his children, because Williams makes plain both his undying love for Jack and Maggie and his frustration and insensitivity.

But it’s Peter the once and former Pan who gives the film its heart, spine, teeth and soul. Spielberg is undeniably one of the greatest directors in film history, and as movies like "E.T.: the Extra-Terrestrial" make clear, he’s more than capable of capturing the wonder and terror of childhood. Here he stumbles, losing sight of the little moments that bring such stories to life. Luckily, Williams never does.

It’s one thing to play wonder and enchantment, and another to convey it so plainly that it’s contagious. As Williams brings Peter nearer and nearer to acceptance of the impossible, he imbues the character with more depth and complexity than the screenplay might suggest are possible, conveying Peter’s panic, sense of loss, insecurity, fear and anger.

Yet at the same time, there’s joy. It’s hidden far beneath the surface at first, then swells as exuberantly as the film’s memorable score (another John Williams classic). By the time the film arrives at its best scene, it becomes all too easy to overlook Spielberg’s more saccharine tendencies, the overblown yet flat performance of Dustin Hoffman (as Hook) and the too-precious dialogue.

Never has the trading of insults between a grown-up and a child (Dante Basco, unforgettable as Pan rival Rufio) been so delightful; never has a food fight been so laced through with joy.

There are better Robin Williams performances than the one he gives in "Hook," but there’s no movie that benefits more from the empathy, gentleness, vitality and joy he brought to the screen. It’s a performance so warm and wonderful that, despite its many flaws, "Hook" has remained a family classic, the kind of movie grown-ups can’t pass by when they stumble across it on cable and that kids will discover with glee for decades to come.

The effects may be dated, the design overwrought and the story sticky-sweet, but Williams makes "Hook" one of life’s can’t-miss movies, a mess with a gem shining brightly throughout. It’ll make you want to crow — and it’s streaming for free on Tubi.