Several are calling for the release of 110 Armenian POW’s currently being held captive by Azerbaijan.

A 44-day war between those two countries ended with an agreement to stop fighting three weeks ago. But viral videos show captured Armenian soldiers and civilians being tortured and killed.

A wake-up call from the legendary singer Cher. The superstar’s grandfather survived the Armenian Genocide. Now, she’s raising awareness about another existential threat to her people. 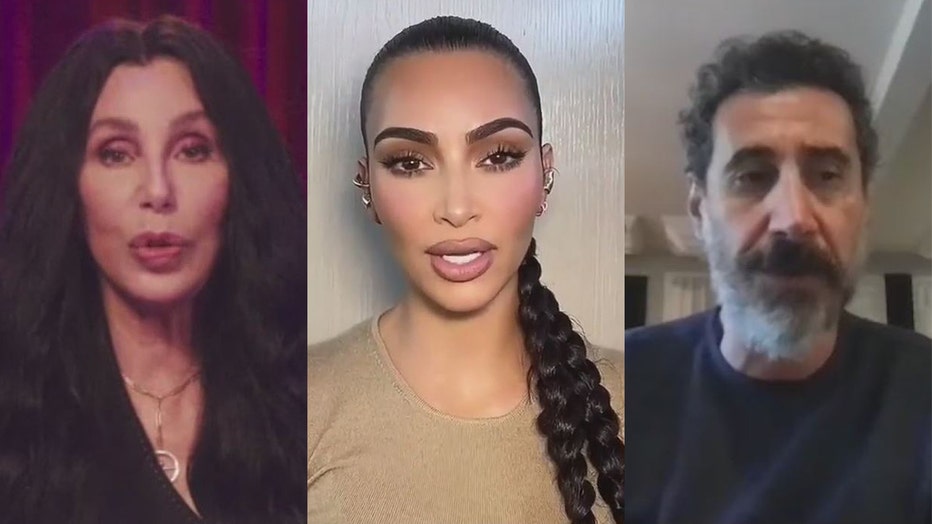 Cher is among those asking global leaders to address Azerbaijani aggression.

Kim Kardashian is also speaking out, in addition to donating one million dollars in humanitarian aid.

System of a Down released two new songs in 15 years to raise awareness and aid money. These famous Armenian-American rockers are also lobbying for justice.

RELATED: System of a Down releases new music for first time in 15 years to benefit Armenia

"The injustice done to our people made me, uh, an activist for all things. And so seeing this type of injustice by a despotic, dictatorial regime that even after a war is not only gloating but it's torturing POW's, it's disgusting to watch," said System of a Down vocalist Serj Tankian.

Azerbaijanis are circulating videos all over social media — on apps like TikTok and Telegram. The graphic videos show the mutilation and murder of civilians and soldiers.

"Based on what their soldiers did during the war, the mercenaries, et cetera, the beheadings, the, um, skinnings, the brutalization of the POW's even, even dead bodies. It's really, uh, it really shows what type of enemy, uh, that has been fighting the Armenian forces. It's really disgusting," Tankian said.

Actress and activist Arsinee Khajian, who was featured in the documentary “Way Back Home," is one of many angry and upset at what she calls barbaric crimes.

"They are all by nature, very upsetting, very violent, inconceivable in that matter that in 2021, when we fight with drones, we also use the barbaric initial sort of ways of torturing people, um, having ears, stabbing dead people's faces," she said.

International laws call for the immediate exchange of POW’s, but neither Armenia nor the Red Cross are able to get answers from Azerbaijan.

"These matters are really happening," said Khajian. "And so we have all of us and not only myself, all of us as citizens of the countries that we are Armenian or non-Armenian in the name of proper procedures, to handle the prisoners-of-war because we don't know how long they're going to live."

Artsakh’s human rights defender Artak Beglaryan, who was blinded as a child by an Azeri landmine, wants the international community to stop talking — and to start acting.

"Well, when you're not willing to hold accountable, those that are the aggressors, that's an encouragement to further violence," said Schiff. "And ultimately that's what we saw. Many of us had been warning that this was exactly what was going to happen if we continued this policy of false equivalence — if we continued giving hundreds of millions of dollars in military assistance to Azerbaijan, even though when they were committing human rights violations."

Human Rights Watch is asking for information from Azerbaijan but has not received a response yet.

Advocates are continuing their appeal to Amnesty International, Human Rights Watch and the United Nations — asking for an emergency intervention.