WASHINGTON — A slow-moving rainstorm Monday washed out roads, stranded drivers and soaked basements, including the White House's, during a chaotic morning commute in the national capital region.

Water gushed into the press workspace in the basement near the White House's West Wing. Government employees worked to drain puddles of standing water with wet vacs.

National Weather Service meteorologist Cody Ledbetter said the storm dumped about 6.3 inches of rain near Frederick, Maryland, about 4.5 inches near Arlington, Virginia, and about 3.4 inches at Ronald Reagan Washington National Airport in a two-hour period.

"The storm was not moving very quickly," Ledbetter said.

Water levels at Cameron Run in Alexandria, Virginia, a flood-prone area along the Capital Beltway, rose more than 7 feet over 30 minutes after 9 a.m., according to the weather service. Four Mile Run, which runs through Arlington and Alexandria, saw a similar increase.

"Everywhere I turned, there was traffic and roads closed," he said. 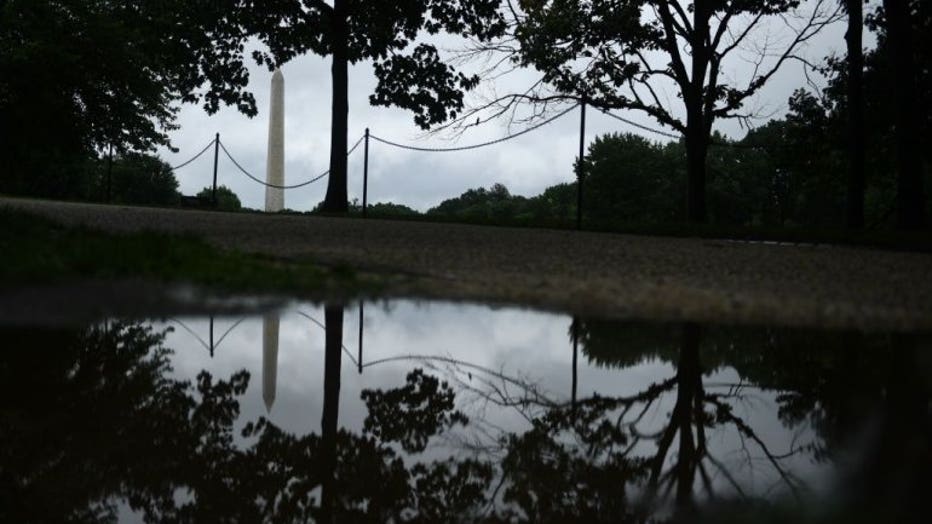 The Washington Monument is reflected in rain water on July 8, 2019 in Washington,DC. (Photo by Brendan Smialowski / AFP)

Gretchen Eisenberg's morning 4-mile commute usually lasts about 10 minutes. It took her nearly an hour to drive to work from her Frederick home. She stopped to shoot eye-popping video of a Frederick park inundated with raging floodwaters.

"I tried to take my normal route, but I had to turn around and take a different way in because of the flooding," she said.