HONOLULU —Hawaii's Kilauea vo lcano erupted anew before dawn Thursday, spewing a steely gray plume of ash about 30,000 feet (9,100 meters) into the sky that began raining down on a nearby town.

The explosion at the summit came shortly after 4 a.m. following two weeks of volcanic activity that sent lava flows into neighborhoods and destroyed at least 26 homes. Scientists said the eruption was the most powerful in recent days, though it probably lasted only a few minutes.

Geologists have warned that the volcano could become even more violent, with increasing ash production and the potential that future blasts could hurl boulders from the summit.

Toby Hazel, who lives in Pahoa, near the mountain, said she heard "a lot of booming sounds" Thursday. Those came after days of earthquakes. 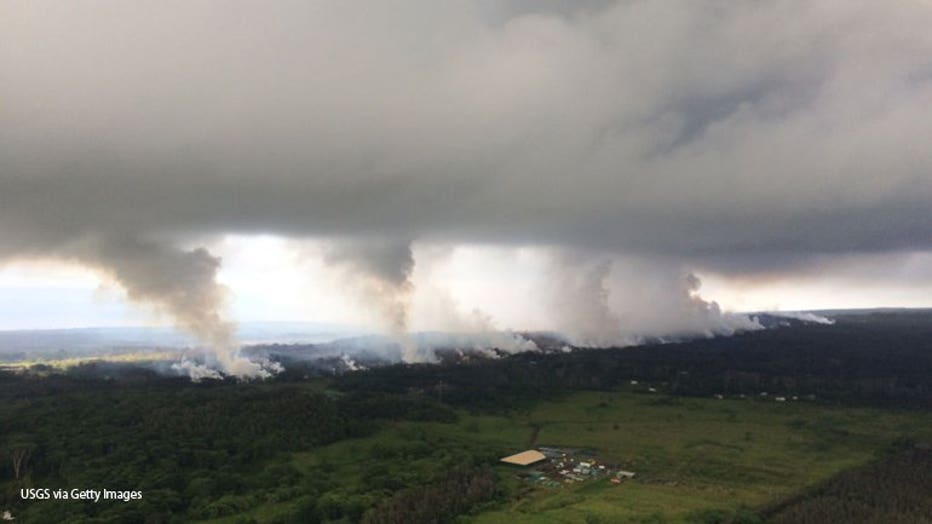 PAHOA, HI - MAY 16: In this handout photo provided by the U.S. Geological Survey, sulfur dioxide plumes rising from the fissures along the rift and accumulating in the cloud deck as a result of Kilauea volcano activity on Hawaii's Big Island on May 1

"It's just time to go — it really, really is," she said, preparing to leave town. "I feel so sorry for the people who don't go, because they don't have the money, or don't want to go to a shelter and leave their houses."

Some people in the community closest to the volcano slept through the blast, said Kanani Aton, a spokeswoman for Hawaii County Civil Defense, who spoke to relatives and friends in the town called Volcano.

At least one person who was awake heard nothing. Epic Lava tour operator John Tarson is an early riser and said he only learned about the eruption because he received an alert on his phone.

Tarson said the ash plume looked different than others he's witnessed because of its sheer height. A video he shared on Facebook showed a towering column of ash reaching into a hazy sky.

"What I noticed is the plume was just rising straight into the air, and it was not tipping in any direction," he said. "We've been expecting this, and a lot of people are going to see it and get excited and scared."

Residents as far away as Hilo, about 30 miles from Kilauea, were noticing the volcano's effects. Pua'ena Ahn, who lives in Hilo, complained about having labored breathing, itchy, watery eyes and some skin irritation from airborne ash.

A National Weather Service ash advisory was in effect until noon. Several schools closed because of the risk of elevated levels of sulfur dioxide, a volcanic gas.

The crater sits within Hawaii Volcanoes National Park, which has been closed since May 11 as a safety precaution over risks of a violent eruption.

Scientists warned May 9 that a drop in the lava lake at the summit might create conditions for an explosion that could fling ash and refrigerator-sized boulders into the air. Geologists predicted such a blast would mostly release trapped steam from flash-heated groundwater. If it happens, communities a mile or two away could be showered by pea-size fragments or dusted with ash.

Kilauea, one of the world's most active volcanoes, has been erupting continuously since 1983. It's among the five volcanoes that form Hawaii's Big Island, and the only one that's actively erupting. An eruption in 1924 killed one person and sent rocks, ash and dust into the air for 17 days.

Robert Hughes owns the Aloha Junction Bed and Breakfast, about a mile and a half from the crater. He said he didn't hear anything and has yet to spot ash. So far, he said, Thursday has been a "nice rainy day."

His business has been hit hard by fears of the volcano, a major attraction for visitors. He's lost hundreds of reservations and had just three guests Thursday instead of the 12 to 14 he has typically served. One was a news reporter, and the other two were visiting from Italy.

"In the old days, people used to love to come see the volcano. They'd even take their little postcards, burn one corner in the lava flow, mail them off, stuff like that," he said. "Now they're acting like it's all super-dangerous and everything, but it just kind of oozes out."