Grafton police are looking for two ATM thieves after the machine stolen from Cornerstone Community Bank was found with an abandoned stolen pickup truck.

GRAFTON, Wis. - Grafton police are looking for suspects after an ATM, stolen from Cornerstone Community Bank, was found with an abandoned stolen pickup truck.

The stolen ATM and pickup truck were found after police responded to a burglar alarm on Wednesday morning, Feb. 2 at 4:20 a.m. at the bank near Wisconsin Avenue and Chateau Drive.

Video surveillance showed two suspects arrive in the pickup truck and try to break into the ATM – unsuccessfully. The suspects then attached the ATM to the truck with chains and drove through the parking lot to dislodge the ATM from its base.

Suspects in a reportedly stolen pickup truck were caught on camera stealing an ATM from outside a Grafton bank. (Courtesy: Grafton Police Department)

A resident called to report a truck with no lights a towing a "trailer without wheels" near Green Bay and Lakefield roads – roughly a mile away from the bank. Police later found the suspects' truck and ATM in the front yard of a Cedarburg home further down Green Bay Road near Hamilton Road.

Investigation found the suspects were unable to get into the ATM and no money was taken. The pickup truck had been reported stolen in Milwaukee. 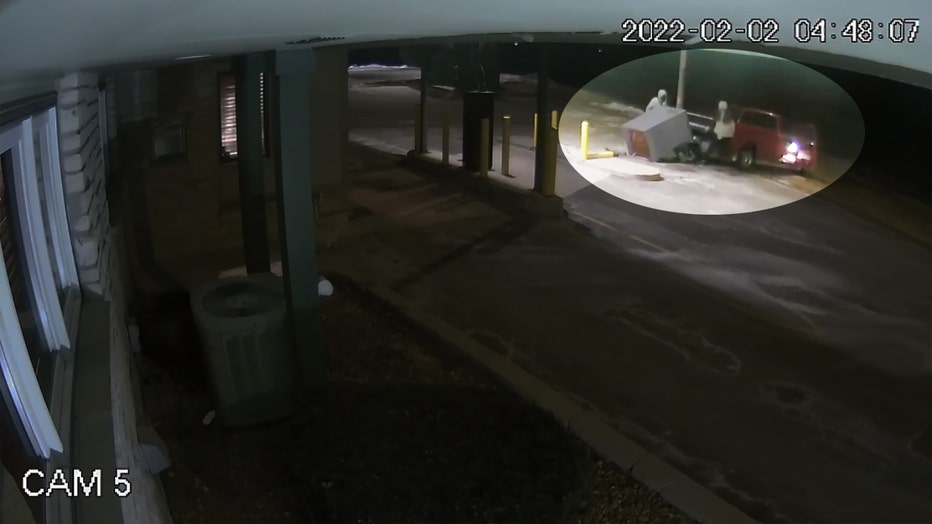 Other agencies, including the Glendale Police Department's K-9 unit and the Ozaukee County Drone Team, were called to the scene.

A Milwaukee man is now charged in the shooting outside Rufus King High School last week that injured five, including four teens.