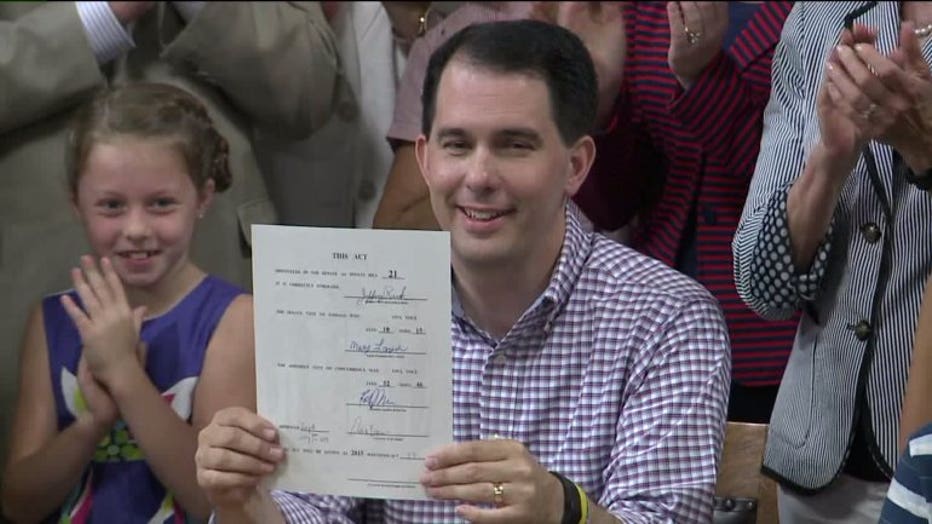 “With this budget, taxpayers come first,” said Governor Walker.  “Property taxes will be cut for an unprecedented six years in a row, while additional money is invested in K-12 education and expanding educational choices for parents and their students.  For the first time in University of Wisconsin System history, undergraduate tuition will be frozen for four years straight to help make college affordable for Wisconsin's working families."

"We continue our support for seniors, needy families, and children by adding $600 million dollars to Medicaid.  We invest in veterans services, adding millions more to worker training and workforce development programs, and implementing programs to help people transition from government dependence and welfare into the workforce.  The budget I signed today again brings real reform to Wisconsin and allows everyone more opportunity for a brighter future," Walker said.

"The reforms in this budget continue to put the hardworking taxpayers and citizens of this great state back in control.  This budget focuses on growth and opportunity for all, while implementing common sense reforms to ensure state government is more effective, more efficient, and more accountable to the public," Walker said.

"Wisconsin’s fiscal house is in great shape," Governor Walker continued.  "Due to our responsible budgeting, new bonding will be at the lowest level in 20 years.  Moody’s moved our outlook for the state’s credit rating from 'stable' to 'positive.'  And our total outstanding state debt level has gone down."

The budget signed Sunday includes 104 vetoes made by Walker, twice as many as Governor Walker has exercised in the past.

The budget freezes taxes, scales back the state's prevailing wage laws and cuts $250 million from the University of Wisconsin System, while freezing tuition. Also included in the budget: drug tests for recipients of food stamps and unemployment benefits and a voluntary seven-day work week for factory and retail workers.

"We`re proud to say that we made college more affordable for college students and working families all across the state of Wisconsin," Walker said.

Walker says new bonding will be at its lowest level in 20 years.

Walker had said he wanted to finish work on the state budget before announcing a run for the 2016 Republican presidential nomination.

He plans to officially announce his candidacy on Monday evening in Waukesha.

Prior to the budget signing, Assembly Minority Leader Peter Barca and other Assembly Democrats held a news conference in Waukesha to give their take on the spending plan.

"This budget is deeply damaging and incredibly unpopular. Make no mistake, this budget is harmful for nearly all things that make Wisconsin great. This budget contains more than 130 new policies -- all of which have never been given a hearing. The budget sells out our children in public schools to allow for rampant statewide privatization of schools," Barca said.

Democrats say the budget guts the UW System, doesn't invest in infrastructure and paves the way for privatization of more K-12 schools.

"The sad reality is Governor Walker is throwing the citizens of Wisconsin, their hopes, their dreams, their future under his campaign bus. If ever in this country we needed somebody who could bring it together as a nation, he's exactly the wrong person," Barca said.

WisDems -- the Wisconsin Democratic Party issued this statement on the signing of the budget:

“As he prepares to announce his campaign for president tomorrow, Scott Walker today signed one of the worst budgets for Wisconsin families in our state’s history.

From attacks on the ability of workers to earn a fair wage to underfunding our public schools and ignoring needed investments in infrastructure while kicking the can down the road with more and more debt, everything about this budget flies in the face of what actually works for creating economic opportunity for all.

So contrary to Scott Walker’s statement that his budget ‘puts the taxpayers first,’ this budget is Walker for President propaganda that puts Walker’s political ambitions ahead of what’s best for our middle class.

It’s a shame that Republicans in the legislature rubberstamped Walker’s budget instead of working with Democrats to make it better; Democrats offered real solutions that work to support a vibrant middle class economy. Wisconsin deserves better than this irresponsible budget full of misplaced priorities.”

Here are some ways the budget could affect Wisconsin residents:

— Public school funding: It wouldn't be cut by $127 million as Walker proposed, but there wouldn't be much more money. Funding would be flat the first year of the budget and go up by about $69 million in the second year, but schools aren't being given the authority to increase spending. That means if a district does get more aid, it will have to divert it to lowering property taxes unless voters approve a special referendum.

— Vouchers: More students who meet income qualifications would be able to attend private voucher schools because the current 1,000-student statewide enrollment cap changes to no more than 1 percent of a district's total students. That would increase 1 percentage point a year for 10 years until there is no cap. Money to pay for voucher students would come out of public school aid. Also, students with disabilities who are denied open enrollment in another public school district would be able to use a voucher for private schools.

— Ratings: A new five-star system would have no sanctions for poor performers. Federal law currently requires schools to take the same standardized test, but Wisconsin would seek a waiver to allow for schools to choose between three and five standardized tests to measure performance.

— Civics test: Starting in the 2016 school year, high school students would have to correctly answer at least 60 of the 100 questions on a civics exam before graduation. They could retake the test until they pass.

— Sports: Home-schooled students would be able to play sports and participate in extracurricular activities at their local public school.

— Milwaukee schools: The worst-performing Milwaukee Public Schools could be converted into independent charter or private voucher schools under control of a commissioner appointed by the county executive.

— State would borrow $850 million for road projects, down from Walker's $1.3 billion proposal. That would mean delays in major highway projects and resurfacing and reconstruction work.

— Several changes are in the offing, including increasing the standard deduction for married couples filing jointly by $550, delaying the full phase-in of an income tax credit benefiting manufacturers and farmers, reducing the alternative minimum tax, allowing teachers to deduct up to $250 a year for classroom expenses and reducing taxes on hard cider. Property taxes would be held basically flat, and there are no increases in sales or income taxes.

— The law that sets a minimum salary for construction workers on public projects like road building and schools would be repealed for local governments but remain for state projects.

— Family Care and IRIS programs that strive to keep elderly people and those with disabilities out of nursing homes could be reshaped to allow for-profit managed care organizations to compete with networks of nonprofit groups that currently provide long-term care and ordinary medical care.

— Recipients of public aid programs like food stamps and unemployment benefits would have to undergo initial screenings for drug use and could be subjected to drug tests later.

— The university system's budget would be cut by $250 million and make it easier to fire tenured faculty. Also, faculty would have less of a role in making decisions. In-state tuition would be frozen over the next two years.

— Fees for Wisconsin state parks would go up by $3 for annual admission and by $1 for daily admission. Camping fees for residents would increase $3 to $5 per night depending on a site's popularity; out-of-staters would pay an extra $5 to $8. The cost of an annual trail pass would go up $5. The fee increases will help offset the end of tax support for state parks.

— There could be more places to backpack, ski or snowshoe. The budget committee authorized the state's stewardship program to borrow $9 million per year for land acquisition. That's down dramatically from $19.3 million next year and $22.2 million in each of the following fiscal years through 2020, however.

— Prison towers would stand empty during the night, as 60 third-shift tower guard positions across 10 prisons would be eliminated, saving nearly $6 million. Those employees would be moved into other vacancies.

— Would loosen the industry to allow payday lenders to offer financial advice and sell insurance, annuities and other related products. Those who oppose the late-added provision say it would make it easier for predatory lenders to exploit the needy.

— Counties couldn't force companies that are building oil pipelines to purchase additional insurance, a provision that would Canada-based Enbridge Energy finish work on an expansion that has been held up for months in Dane County.

—Factory and retail employees would be allowed to volunteer to work seven straight days, a change from current state law that says those workers must get at least 24 consecutive hours of rest for every seven-day stretch.

CLICK HERE for more on the biennial budget, including Governor Walker's Veto Message.