MADISON -- Gov. Tony Evers made 78 partial vetoes to the state budget passed by the Republican-controlled Legislature before signing it Wednesday, ignoring pleas from some liberals who wanted the new Democratic governor to reject the entire two-year spending plan. 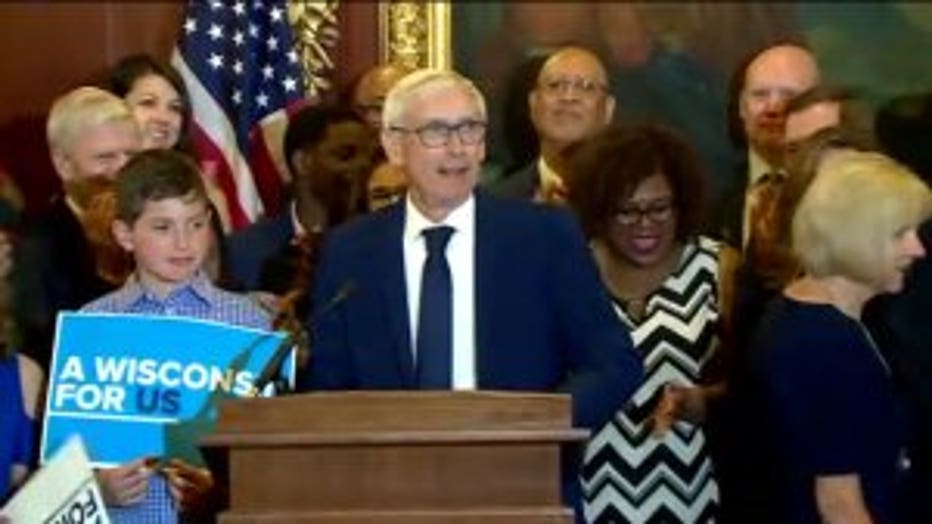 In a message to lawmakers, Evers said he considered taking the unprecedented step but decided against it because it "would have been more of the same divisiveness and petty, political theatrics that the people of Wisconsin have had to put up with for far too long."

Instead, Evers took a more moderate approach and used his broad veto powers to increase funding for K-12 schools and Special Education. He also eliminated a provision benefiting electric car manufacturer Tesla -- and scrapped funding to replace a correctional facility in Green Bay.

CLICK HERE to read the full veto message from the Office of Gov. Evers 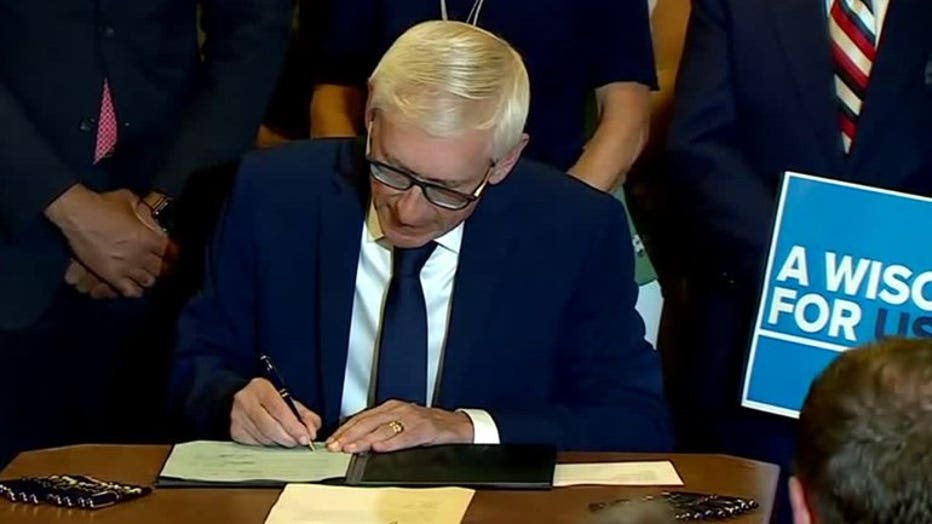 Republicans had urged Evers to sign the $82 billion budget, which they cast as a compromise. No Democratic lawmakers voted for the budget, calling it a missed opportunity. Republicans didn't have the votes to override any of Evers' vetoes.

Republicans stripped his proposals to accept federal money to expand Medicaid, legalize medical marijuana and increase the gas tax as part of a long-term plan to pay for roads.

"Unfortunately, the budget I'm signing here today is insufficient," said the governor. "This is, in large part, due to the unfortunate lack of interest by some Republicans in the Legislature to work together and engage in constructive, bipartisan dialogue, and instead devoting far too much time to huffing and puffing."

Evers acknowledged some successes, including a 10% middle class tax cut, more than $465 million in new funding for roads, efforts to combat water pollution and more funding for health care programs.

"This is a good budget for the state of Wisconsin," said State Sen. Scott Fitzgerald. "He basically signed the Republican version of the budget today."

Evers said his partial vetoes more closely align the budget with what he originally proposed.

Wisconsin's governor has among the most expansive veto powers in the country, allowing him to strike out words within sentences to create new meanings, eliminate entire sections of the budget and individual digits in dollar amounts appropriated.

Evers' predecessor, Republican Gov. Scott Walker, issued an average of 77 partial vetoes in each of the four budgets he signed into law even when they were passed by a GOP-controlled Legislature.

Republicans tried to tighten language in this budget to limit Evers' ability to make dramatic changes.

The most significant veto from Evers, the former state superintendent of schools, came in K-12 funding. He increased the per-pupil aid amount to $742 in each of the next two years, up from the $679 and $704 the Legislature had in the budget. That will result in an $87 million increase for schools above the roughly $500 million more in the budget as passed.

Evers also eliminated a late addition to the budget that would have allowed Tesla to sell its vehicles directly to customers rather than through independent dealers. That was added to help secure the support of Republican state Sen. Chris Kapenga, a key vote in the Senate which narrowly passed the budget last week 17-16.

"I have to make this really clear -- this budget is just a down payment on the people's budget," Gov. Evers said.

Evers also vetoed a provision that would have forbidden security costs for Lt. Gov. Mandela Barnes to exceed those of his GOP predecessor, Rebecca Kleefisch. Republicans have been critical of the level of security Barnes has had since taking office.

Barnes, the first African American lieutenant governor in Wisconsin history, had nine times more hours of security protection during his first two months in office than Kleefisch had all of last year. There has been no stated security threat for the extra coverage.

Reaction to the budget plan

Reaction to Evers' budget is pouring in. Watch and read statements from other state officials below.

"Governor Tony Evers laid out a bold vision for our state’s future that reflected the priorities of Wisconsinites. The Governor’s budget maximized our resources, which would not have only saved taxpayers’ money, it would have allowed for investments needed in our schools, roads, health care and drinking water. These investments are critical to ensuring Wisconsin is a place where the next generation wants to live, work and raise a family.

"While Republican politicians missed many chances to expand opportunities for students, families, and seniors, Governor Evers’ influence over the process put the people’s priorities front and center. Republican obstructionism cannot silence the will of Wisconsin voters and Democrats will continue fighting for quality schools, affordable health care, and clean drinking water."

“While the budget we sent Governor Evers was far from perfect, it was a fair compromise between the Governor’s outrageous budget proposal and what the more fiscally responsible state legislature preferred. Governor Evers’ use of his veto has made this budget a worse document for taxpayers.

“Despite declining enrollment in many school districts, and a historic investment of $500 million in new spending, Governor Evers piled on to increase the new cost for state taxpayers more than 17%.

“I was also discouraged by Governor Evers’ veto of workforce training funding critical to moving welfare recipients into the workforce. With unemployment at record lows we should be focused on expanding our workforce, not our welfare rolls.

“I am further disappointed by Governor Evers veto of accountability for the Lieutenant Governor’s use of State Troopers to travel the state. Reporting on this abuse should concern taxpayers and officials in both parties.

“Despite these shortcomings, I am glad to see our middle class tax cut survived the Governor’s veto pen. The Republican income tax cut will put more money in the hands of all hard working middle class families and limit the future growth of government bureaucracy in Madison.”

“Today’s budget signing by Governor Evers exemplifies his commitment to our public universities by ensuring that long-term investments will benefit students and Wisconsin for years to come.

“Legislative leadership played a key role in championing projects fundamental to growing Wisconsin’s talent pipeline. We once again thank them for moving these shared priorities forward.

“The value our universities provide to students and taxpayers is extraordinary. Preserving the quality of education as tuition remains frozen for its eighth year will require operational investments. This will continue to be a priority for the UW.”

“This conservative budget crafted by the Republican legislature deserved to be signed into law, but without the political, partial vetoes. These vetoes remove dollars from important programs, give more spending authority to government bureaucrats, and allow people to cheat the system by not following the welfare reforms we passed.

“Governor Evers seems intent on trapping people on welfare. Because of his partial vetoes, he’s starving programs that incentivize work, undermining their implementation and skirting the law. We know people support drug testing and work requirements for welfare recipients and this budget ignores that fact.

“At a time with historically low unemployment and many unfilled jobs, this is merely a shortsighted, political move and an insult to the hardworking men and women of our state.

“At the very least, the final budget is no longer a liberal wish list; it’s a more fiscally responsible spending plan. I want to thank the members of the Assembly Republican caucus for their hard work in getting the budget done in a conservative way. I also want to thank our Senate Republican colleagues for working together on the WISCONSIN Budget and getting it across the finish line. Together we eliminated the $1 billion tax hike and massive spending increase. We right-sized the budget, invested in the state’s priorities and reduced taxes on the middle class.”

“Wisconsin has a good budget thanks to the Republican legislature.”

"This budget would have been impossible if Tony Evers hadn’t been elected governor. The funding increases for transportation, education, and health care reflect the core issues Governor Evers campaigned on, the priorities he and Mandela Barnes heard as they listened across the state while drafting the People’s Budget, and the issues they have fought for every day in office.

"Republicans have attacked and obstructed Governor Evers at every turn. In an act of breathtaking political spite, they have refused Medicaid expansion dollars that would have saved Wisconsinites money and expanded health care at they same time. They dramatically shrank the proposed new funding for schools, especially for special education, that their own constituents are crying out for them to provide. On issue after issue, where the governor listened, Republicans have plugged their ears.

“Governor Evers drafted the People’s Budget to reflect the priorities of Wisconsin families, after conversations with real people across the state. His original budget pushed for the policies that matter the most to the people of Wisconsin.

“While the budget process left a lot to be desired, Governor Evers’ ambitious agenda pushed Republicans to increase investments in critical areas far beyond anything we have seen over the past eight years. Today, Governor Evers used his veto pen to return nearly $100 million in per-pupil aid for our public schools to the budget, along with removing the Tesla kickbacks and other provisions.

“Governor Evers said it best -- ‘this budget is just a down payment on the People’s Budget and the priorities of the people of Wisconsin.’ Our priorities will not change — we will continue to push for affordable health care, quality schools, good roads, and a clean environment. Let’s get back to work.”

"We view the budget signed today by Gov. Tony Evers as a foundation to build for the future.

We understand that split-party control of state government requires compromise to get a budget passed. We also understand that state policy makers face many worthy and competing priorities in addition to K-12 schools that must be addressed within the confines of available revenues.

We are pleased the Legislature provided a solid foundation for K-12 schools upon which the governor has been able to build.

On behalf of school boards across the state, we thank the governor for using his veto pen to improve the 2019-21 state budget for K-12 schools."