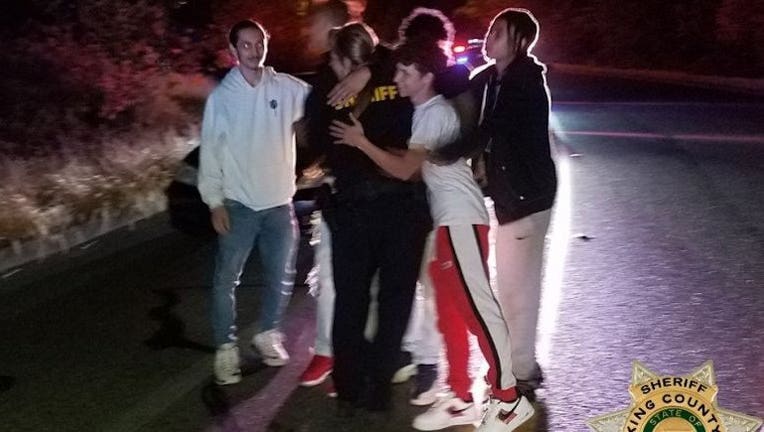 AUBURN, Wash. -- A Washington State deputy has a group of young men to thank for intervening when a suspected intoxicated driver tried to choke her.

According to the sheriff's office, the deputy was off-duty and driving her patrol car home about 1 a.m. on July 18 when she was flagged down in Auburn after a "very intoxicated" man had just caused a multi-vehicle crash.

People in the vehicles that were hit said the driver was trying to walk away from the scene.

When the deputy tried to call on him to stop, he continued stumbling away until the deputy ran up to him and told him he was not free to leave.

He reportedly tried fighting the deputy, who was able to get him onto the ground and call for help on her radio. That's when the man wrapped his arms around the deputy's neck, "put her in a headlock and began squeezing."

She was struggling to get out of the hold when she heard several voices yelling, "Get off of her!" Those young men jumped on the man and struggled with him while the deputy freed herself from the chokehold. They even held the man's shoulders and legs on the ground to allow the deputy to handcuff him.

Thanks to the good Samaritans, the deputy left with only scrapes and bruises instead of more serious injuries.

"We cannot thank these five young men enough for coming to (the deputy's) rescue. They quite possibly saved her life. The photo was taken just a few minutes after the teens helped her. Moms and Dads, you should be proud of these kids!" the sheriff's office said in a Facebook post.

The driver was arrested for felony assault of an officer and DUI. He had several other warrants for his arrest, including for DUI, driving while license invalidated and failure to have an ignition interlock, according to the sheriff's office.