Landon is making it his mission to make sure children in Atlanta wake up on Christmas with presents under their tree.

SMYRNA, Ga. - A 6-year-old Smyrna boy is making it his mission to make sure children in Atlanta wake up on Christmas morning with presents under the tree. He started collecting Hot Wheels race cars about a month ago, and the collection has grown more than his family ever expected.

Landon Floyd can tell you anything you want to know about Hot Wheels. Like most kids, he loves getting toys for himself, but this year he wasn't thinking about receiving.

"I'm going to give them to other kids who don't have any," Floyd says. 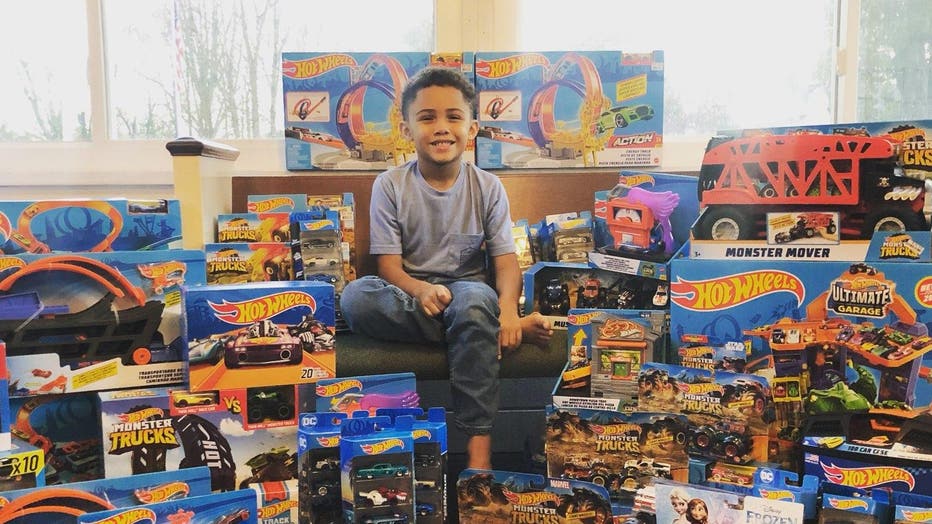 (Courtesy of the Floyd family)

The idea came from one of Landon's friends who was collecting Barbie dolls to donate.

"As we were driving off, Landon kind of got upset because he realized little boys probably don't like Barbies," explained Stephanie Floyd, Landon's mom, "So, he wanted to do something for the little boys."

That's how his Hot Wheels toy collection got started.

"We talked about it. We came home. I said 'If you want to do it, we can do it,' and he said, 'Yeah, I want to do my own toy drive for little boys. Let's do Hot Wheels,'" said Stephanie Floyd.

The original goal was to collect around 100 Hot Wheels toys to give to MUST Ministries and Children's Healthcare of Atlanta. Landon started his collection with just a few toys that he bought with his own money.

Over the course of a few weeks, the collection has grown to now over 400 toys.

Stephanie said Landon has always had a big heart and when he approached her about it, she did what she could to make it happen.

"It's just refreshing to see a young kid care about other people. He's always been that way. He's always just been the kid that wants people to be happy, so to see it in this magnitude is really cool," she said.

If you would like to help with Landon's Hot Wheels collection, the family has put together an Amazon wish list. You can find that here.