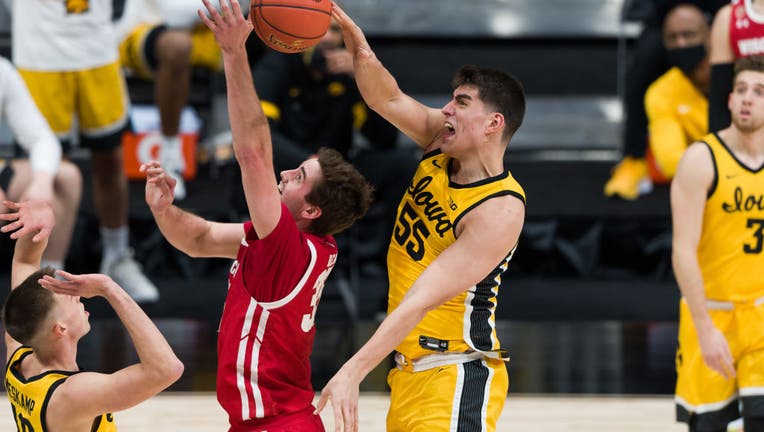 INDIANAPOLIS - Iowa can count on all-time leading scorer Luka Garza as an offensive cornerstone, but it helps to have another player who can deliver in crunch time.

Joe Wieskamp was that guy on Friday night. He made two key inside baskets late and had a last-minute blocked shot that secured the fifth-ranked Hawkeyes' 62-57 in over Wisconsin in the Big Ten Tournament quarterfinals.

Garza did his part, scoring 24 points. But Wieskamp impressed teammates and coaches with his grit, especially considering he injured his right ankle in the regular-season finale five days ago.

"Phenomenal. He stepped up in big-time moments today," said guard Jordan Bohannon, who had 11 points.

"I was really impressed with him," Iowa coach Fran McCaffery said. "I didn't see anything at all in his performance that looked like he was a step slow or favoring anything. He was out there competing and having fun."

Garza dominated inside, making 10 of 15 field goals and 4 of 5 free throws.

The game was tied at 52 when Wieskamp took advantage of Garza drawing the inside defense away from the paint. Wieskamp maneuvered inside with a size mismatch for close-range baskets on consecutive possessions, the latter for a 56-52 lead with 2:35 remaining. He finished with 10 points. Iowa had a 38-20 edge in points in the paint.

The third-seeded Hawkeyes made just 2 of 20 3-pointers, and trailed by six points at halftime because of eight turnovers and 17 missed shots.

"It was ugly, I'm not going to lie to you," Bohannon said.

The sixth-seeded Badgers (17-12), who entered the tournament having lost five of six, dropped another close game because they couldn't make clutch shots.

"We're right there toe-to-toe with a lot of these teams," Wisconsin coach Greg Gard said. "We've just got to play better in key stretches. They understand we've got to take one more step."

D'Mitrik Trice led Wisconsin with 19 points, but with the Badgers trailing by four in the final minute, he was unable to get the ball inbounds in 5 seconds, sealing the outcome.

"It's the little things," Gard said. "It's a rebound here, a turnover there. The margin for error is very slim. We can't have those miscues."

Wisconsin finished the first half with a 7-2 run to take a 32-26 lead, but Iowa responded with a 7-0 run early in the second half to trim the deficit to one. The teams traded the lead five times in the final 11 minutes.

Wisconsin: The Badgers hoped to show something in this tournament to improve their chances of playing in the NCAA Tournament or NIT. Almost blowing an 18-point lead in a one-point win over Penn State on Thursday was the highlight of the weekend.

Iowa: The Hawkeyes were assured of an NCAA Tournament berth when they arrived in Indianapolis and now have a chance to improve their seeding. ... Iowa's 14 regular-season conference wins were its most since 1987.

Iowa: Takes on Illinois in the semifinals.