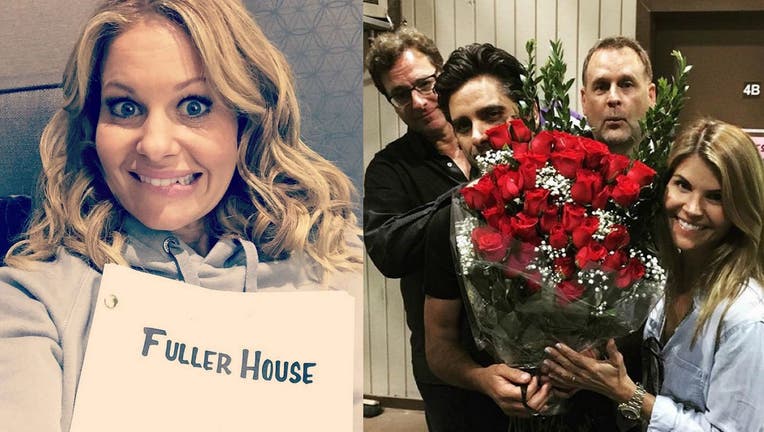 "Fuller House" is in production with Netflix and stars Lori Loughlin and Candace Cameron Bure say it absolutely has the feel of the "Full House" -- especially since DJ is no longer a pregnant widow, which was deemed a little too dark for the tone of the revival.

"She's actually not pregnant any more," Bure tells Zap2it at a 2015 TCA press tour event. "The baby's been born, I think for that very reason we didn't want to start it out quite so heavy, so some more time has passed than they originally intended."

But when asked how "Full House" boyfriend Steve (Scott Weinger) fits into the show, Bure is tight-lipped. "I wish I could, but I can't!" she says with a laugh. "But Steve is not dead, fans rejoice!"

Despite no spoilers about DJ and Steve, here are five more teases about the "Full House" sequel.

1. Fans will learn a little about DJ's late husband

"I think you'll learn little bits about him throughout the show, just like you did on the original 'Full House'," says Bure. "I don't know any details of whether they'll have flashback scenes or anything like that, I have no idea. But we talk about him because you have to when that happens and you have children, ­­ it's something that you have to discuss -- discuss those emotions and the healing from it and how to move on with life."

2. Yes, Jesse and Becky have lived happily ever after

"For sure they did!" says Loughlin. "Can you imagine the series if we were divorced or something? That would not go over well. ... I've always thought they were still a couple that's happily married and still in love -- and they are." She also adds that Becky is still a news anchor.

3. The cast is having a blast

"It was amazing to be back. In some ways it felt like we never left," Loughlin says. "We sort of picked right up where we left off. We do see each other quite a bit, so it's not like we were some cast that was estranged, we do stay in touch with one another, so maybe that's why it felt so familiar."

Bure adds, "We are having the time of our lives, really. Of course we've all been great friends and we hang out all the time, but just to be on the stage together and working together ­­-- we're all pinching ourselves. It feels like we never left one another, and I think we're having more fun than the first time around, which is hard to beat because we had an amazing time!"

4. The tone is heartfelt, but it's a modern show

"The way they developed the show, it is tragedy that starts off the show, which is like the original 'Full House,' but the themes are always heartfelt," says Bure. "It's always a situation that you can learn something from ... tonally it'll feel the same as the original 'Full House,' which is heartfelt and funny and family­-friendly. But it's current, it's today's time."

5. The writers incorporate real-life situations into the show

"We're so happy that we have Jeff Franklin, who created the original show, because there's no one that knows the characters better than Jeff," says Bure. "Really since the show was in the conceptual stages, we started talking about the character and just like with the original show, they writers would always want to know what was going on in our personal lives and what would translate and be relatable to scripts on the show.

"It's really the same for this show. They're asking me what kind of mom I am with my three kids, so we're going to use a lot of my own personal experiences, but we'll make them DJ's in the way that she is a mom and does life."

Loughlin adds, "Knowing that Jeff was writing it and he was the original creator of the show, I don't think any of us had too many concerns about the characters being taken care of and serviced in the right way, because really that's his baby and he's gonna do everything he can to protect it and protect the integrity of all the characters."

"Fuller House" premieres on Netflix in 2016.