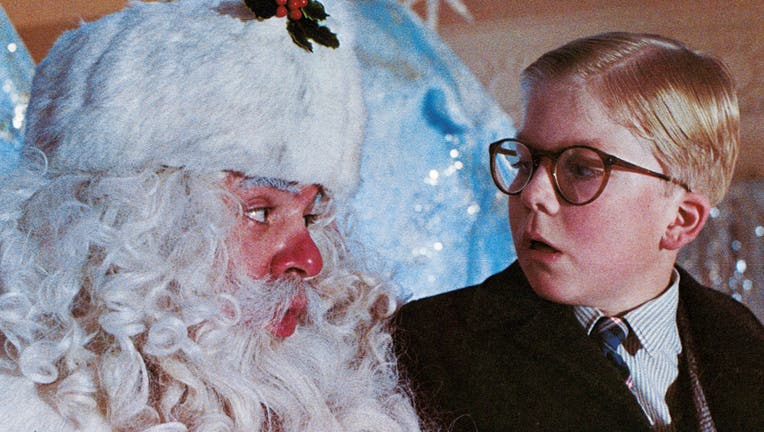 Peter Billingsley sits on Santa's lap in a scene from the film 'A Christmas Story', 1983. (Photo by Metro-Goldwyn-Mayer/Getty Images)

CLEVELAND - Peter Billingsley is dishing on a little-known secret from the set of “A Christmas Story.”

The 49-year-old recently made an appearance in the podcast “That Scene With Dan Patrick,” where he discussed the beloved holiday classic.

“A Christmas Story,” which premiered in 1983, tells the tale of a young boy (Billingsley) living in the 1940s who attempts to convince his parents, his teacher and Santa that a Red Ryder BB gun is all he really wants for the holidays.

Billingsley was just 12 years when he took on the role of Ralphie. For one memorable moment in the film, the character daydreams about saving his family with a BB gun and is dressed up as a sheriff. According to the former child star, he was actually given real chewing tobacco for the scene.

“Well, they totally screwed up, Dan,” Billingsley recalled, as quoted by People magazine on Wednesday. “The scene says he’s dressed as a sheriff. So you put the costume on. And a line in the script says he’s chewing tobacco. So, sure enough, the prop man, who’s responsible for that – anything the actor touches is the prop man’s department – he comes up to me and he’s got this pouch and it says Red Man on it, and he flips it open – I swear to God, I don’t know the difference – I said, ‘What do I do with this?’ He says, ‘Here, jam it down in here.’ He says, ‘Don’t swallow, just spit.’”

“So, I do it, we get ready to go, and about 15 minutes in, the world starts tilting,” Billingsley continued. "I start sweating. My stomach starts hurting, and I start throwing up.”

Billingsley said that director Bob Clark immediately yells, “Cut, cut! What the hell is going on?”

“So we shut it down, I go and lay on the couch in the living room of the set for about 40 minutes until I can get this s--- out of my system,” he continued. “Then they did what they should have done. Someone had the good idea – they took a bunch of raisins, squished them together and then stuck that in my mouth, and I had brown spit. Can you imagine? It was a very different time then. He just gave me straight-up, whole-cut-leaf Red Man.”

Billingsley, who went on to direct and produce, said he was allowed to keep the BB gun from the scene in question. But decades later, he’s still stunned that “A Christmas Story” continues to be popular among viewers.

“To have something that stuck then, and then every decade continues to, there’s obviously a deeper core that it’s hitting,” he said.

Zack Ward, who played bully Scut Farkus in “A Christmas Story,” told Fox News in 2018 that one painful moment he recalled from filming was the snow.