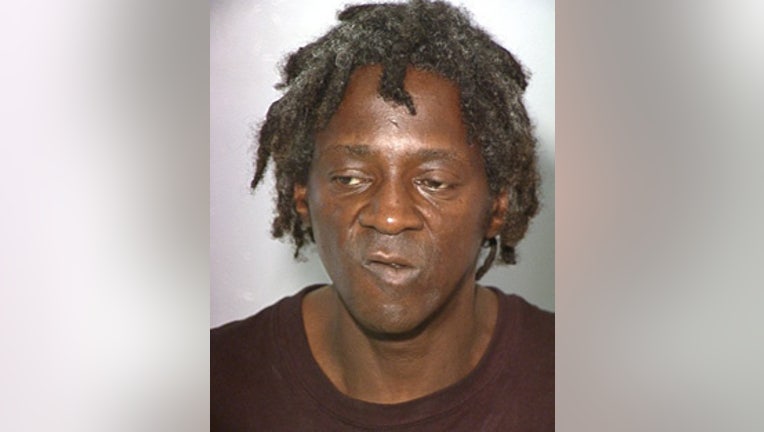 (CNN) -- Former rap star Flavor Flav was arrested Wednesday in Las Vegas, Nevada, and charged with assault with a deadly weapon and battery in a case involving his fiancee of eight years, police said.

Police were called to their house on the city's south side at 3:30 a.m., according to a domestic battery report issued by the Las Vegas Metropolitan Police Department, which offers the following account of events:

Flav, whose real name is William J. Drayton, 53, was arguing with the woman, Elizabeth Trujillo, 39.

The two had gotten into a "verbal altercation due to Drayton cheating on Trujillo," it said. The argument continued in the downstairs bedroom, where "Drayton became physical."

"Trujillo stated Drayton grabbed her by the shoulders, stomach and arms, and threw her to the ground two separate times," it continued, adding that Trujillo said an earring was ripped out of her ear during the incident.

At that point, Trujillo's 17-year-old son, Gibran, began wrestling with Drayton in the living room of the 4-bedroom, 2-1/2-bath house, Trujillo told police.

Drayton -- who is 5 feet, 6 inches tall and weighs 131 pounds -- grabbed two knives from the kitchen and chased his fiancee's son -- who is 6 feet, 175 pounds -- "around the living room, threatening to kill Gibran," the teen told police.

When the teenager locked himself and his sister Kayla inside her room, Drayton kicked in the door "and began making threats to kill Gibran," according to the report.

Though Drayton "confirmed the stories told by Gibran and Trujillo," he denied having chased or threatened to kill the teenager, the report said.

Drayton is scheduled for an initial hearing on Thursday morning.

During the incident, Drayton cut a finger with one of the knives he was holding.

It was not clear whether he had a lawyer.

During the 1980s and 1990s, Drayton was a member of the militant rap group Public Enemy. Its biggest hit, "Fight the Power," served as a soundtrack to the Spike Lee film "Do the Right Thing."

The group, which has been nominated for induction next year into the Rock and Roll Hall of Fame Museum, "brought a new level of conceptual sophistication to the hip-hop album, and a new level of intensity and power to live hip-hop, inspiring fans from Jay-Z to Rage Against the Machine to Kurt Cobain," according to the organization's website. "After Public Enemy, hip-hop could never again be dismissed as kids' music."