Lt. Gov. Mike Kehoe declared a state of emergency for Missouri in response to the flooding on behalf of Gov. Mike Parson, who is currently on an international trade mission. 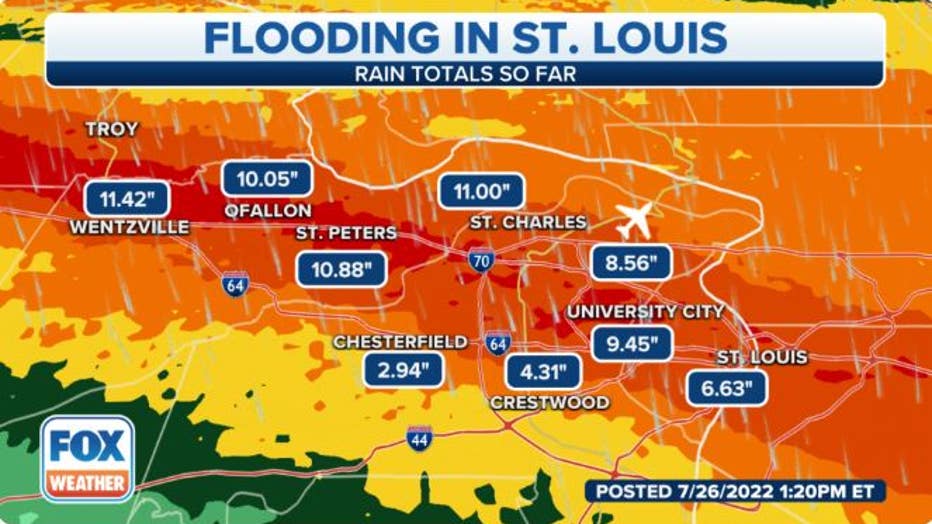 "This is a PARTICULARLY DANGEROUS SITUATION. SEEK HIGHER GROUND NOW!" the National Weather Service wrote in their warning.

The death occurred in St. Louis. Firefighters received a report of a car flooded by 8.5 feet of water, according to Chief Dennis Jenkerson.

As the water receded the car became visible, and firefighters found a body inside. No other details were released about the victim.  At least 70 others trapped by floodwaters in the city have been rescued, Jenkerson said.

7 FACTS YOU SHOULD KNOW ABOUT FLASH FLOODS

An animal shelter reports 10 puppies died when floodwaters reached their shelter, according to their Facebook page.

"Sadly the puppies did not make it, the water levels were too high," said officials with Stray Paws Adoptable. "Our hearts are breaking."

A pet-friendly county shelter at the Richmond Community Center is open to surrounding communities affected by the flooding. The American Red Cross is helping about 100 people at the shelter with basic needs, according to St. Louis County Executive Sam page.

Residents who have damages to their property are asked to call the United Way at 2-1-1 to report damages. 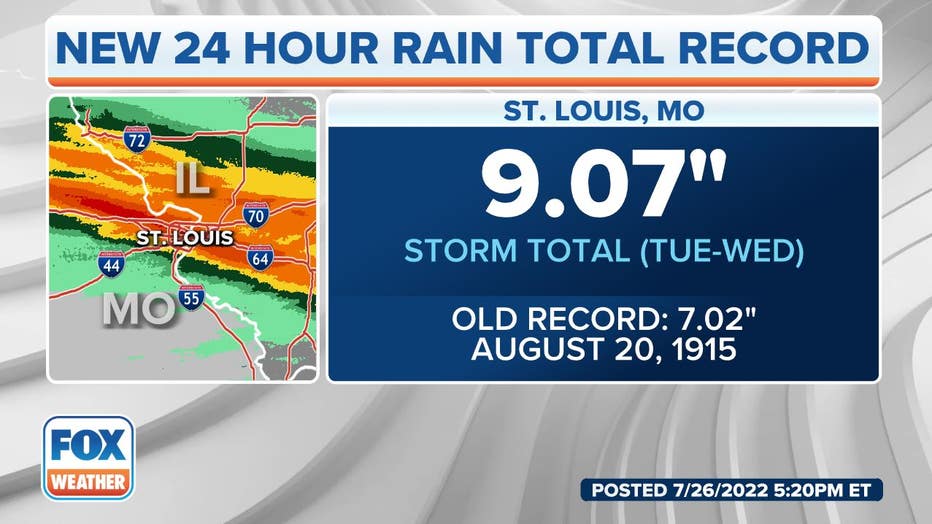 St. Louis' official reporting station at Lambert Airport has shattered its record for the wettest day, with 8.56 inches of rain – much of it coming in just a few hours. The old record was 6.85 inches set in 1915 with the remnants of the Galveston Hurricane.

The NWS said the rainfall totals seen on Tuesday have a 1 in 1,000 chance of occurring in any given year.

More rain is forecast for Tuesday night and Wednesday. The latest forecast calls for 2 to 4 inches of rain.

Dozens of reports of road closures and water rescues came in from across the western St. Louis area. Along Hermitage Avenue, St. Louis firefighters rescued six people and six dogs from 18 homes in the neighborhood that has experienced "substantial flooding."

St. Louis officials said more than 70 rescues were completed throughout the day.

"These roads are heavily flooded and some people are trying to make it through, and they’re getting stranded causing us to have to do water rescues," Cpl. Logan Bolton with the Missouri State Highway Patrol told FOX Weather.

Their marine units, usually busy with rescues on lakes and rivers, have instead been busy in urban scenes.

"This is something we’ve never seen," Bolton said. "Not often are we having to send our marine units onto the interstates for water rescues and getting their boats out. They’re out here in water that’s in some places reaching to the top of cars."

In St. Peters, one driver had to be rescued when their car was swept off the road into Spencer Creek.

"We were able to navigate water that was over their heads to get to that individual," said Chief Jason Meinershagen, spokesperson for Central County Fire & Rescue. "He's out safely at this point and transported to a medical facility."

The Pritchard Farm Bridge in St. Louis County is closed due to possible erosion. County engineers are evaluating the bridge.

Interstate 70 was flooded and closed near Mid Rivers Mall Drive in St. Charles County near the town of St. Peters due to flooding, while lanes were flooded and closed at Lucas and Hunt Road near St. Louis, where the highway was closed through the Interstate 44 interchange.

Parts of Interstates 170 and 270 were also flooded and closed at times Tuesday morning. 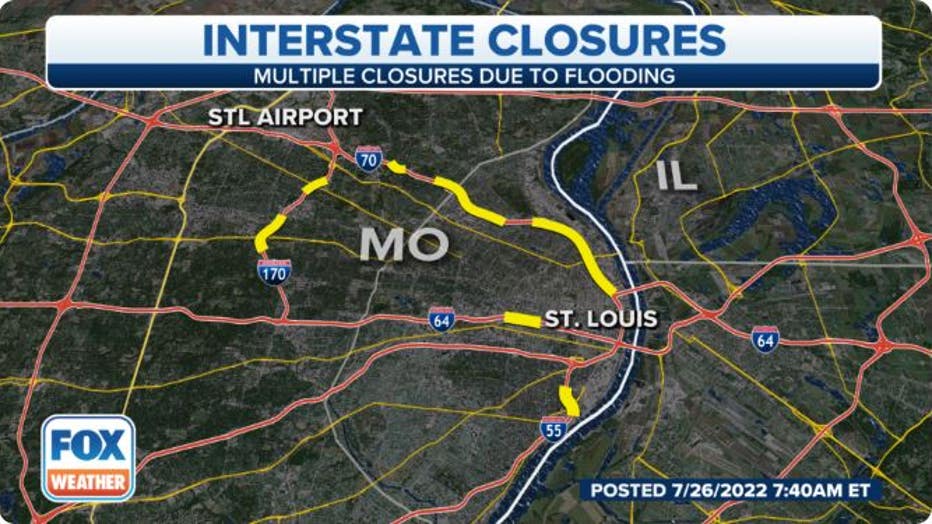 HERE’S WHAT TO DO AFTER YOUR CAR IS FLOODED

PLAN, PREPARE, PROTECT: HOW TO BEST COVER YOUR PROPERTY AGAINST FLOODS

The flooding also spread into southwestern Illinois, where Flash Flood Warnings were in effect until mid Tuesday morning after 2-5 inches of rain fell.  The warnings covered parts of Interstates 64, 55 and 70 in the Monroe and St. Clair areas.

How did it get so wet?

The historic rainfall is the combination of abundant atmospheric moisture and a frontal boundary that stalled over the heavily populated area.

"A warm front lifted (Monday) night, but then the boundary stalled out across the region," said FOX Weather Meteorologist Jane Minar. "We have warm air to the south of (the front) -- in fact, we have heat advisories in southern Missouri -- and then we have colder air off to the north. These two air masses butt up against each other but neither one wins out. So we see this boundary set up between these two and that's where that disrupting weather sits, and doesn't move."

THESE ARE THE RAINIEST HOUR AND MINUTE IN AMERICAN HISTORY

Meanwhile, the atmosphere in that area already had a copious amount of moisture available.

"There's really no mechanism to push this boundary north or south," Minar said. The rain will continue like a train track along that boundary."

The storms followed along that boundary, which veered a bit toward St. Louis. 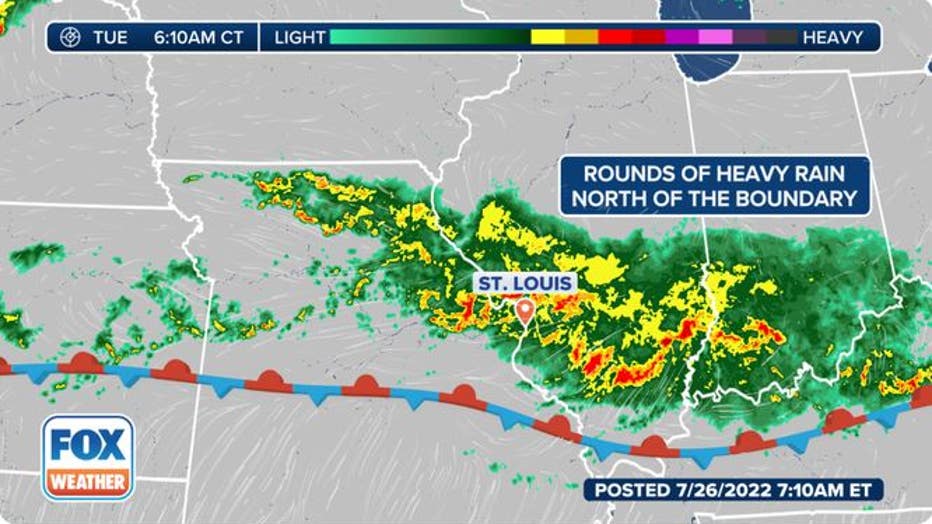 "And that's what allowed this band of rain to continue to filter in over St. Louis and drop in rainfall rates of 2-4 inches per hour, which has led to the incredible rain reports we've seen – anywhere from 5-10 inches since midnight," Minar said. "And because this boundary is not moving, these storms are going to continue to dive down and run into these same areas over the next several hours… People living in St. Louis have never seen rain like this before."

Activity is likely to continue through the mid-morning hours and then begin to wane later in the morning. Another round of heavy rain is possible Wednesday.