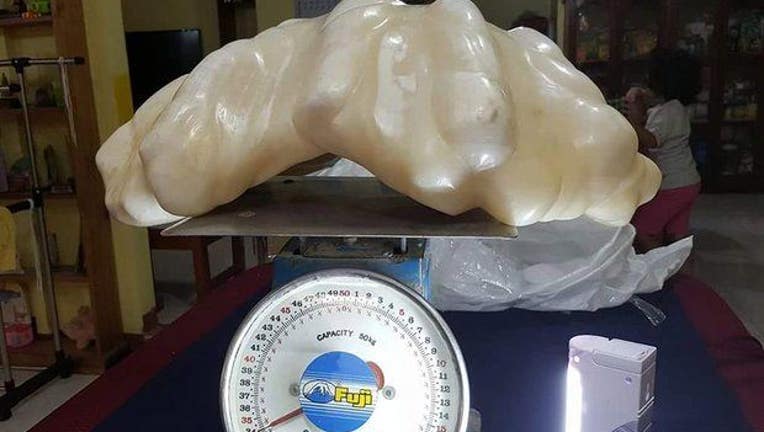 There are fish tales, and now there's this doozy of a pearl tale from a fisherman in the Philippines. If it turns out to be true, the world has a new largest pearl, by a mile.

As first reported by the Palawan News, the unidentified man says he was out fishing a decade ago when his boat's anchor snagged on something.

He says he dove down to investigate and returned to his boat with a monster of a natural pearl: It's 2.2 feet long and weighs 75 pounds.

By comparison, the world's current record-holder, the Pearl of Lao Tzu, weighs 14 pounds. Even stranger: He brought it home and stuck it under his bed for years.

The man apparently had no idea of its potential value and considered it more of a good luck charm than anything else, reports the BBC.

Finally, when he was moving, he gave it to his aunt, who just happens to be a tourism official in Puerto Princesa, reports the Guardian.

“We were amazed," she says. "So far based on our research in the web we cannot find any recorded article about this kind and as big as this size," she says. It's now on display at city hall, and his aunt has put out a call on Facebook for gem experts to help authenticate it. "Just for the info of everyone, all recorded giant pearls in the world came from Palawan Waters," she adds. If this one turns out to be legit, the value is estimated to be north of $100 million. (This woman found a pearl on her dinner plate.)

This article originally appeared on Newser:Fisherman Has Craziest Pearl Tale You'll Ever Hear