In appearance, he was no Elvis Presley. He stood 5-feet-5 and weighed more than 200 pounds, with a wide, boyish smile and a haircut as flat as an album cover. But Domino sold more than 110 million records, with hits including "Blueberry Hill," ''Ain't It a Shame" and other standards of rock 'n' roll.

He was one of the first 10 honorees named to the Rock and Roll Hall of Fame, and the Rolling Stone Record Guide likened him to Benjamin Franklin, the beloved old man of a revolutionary movement. 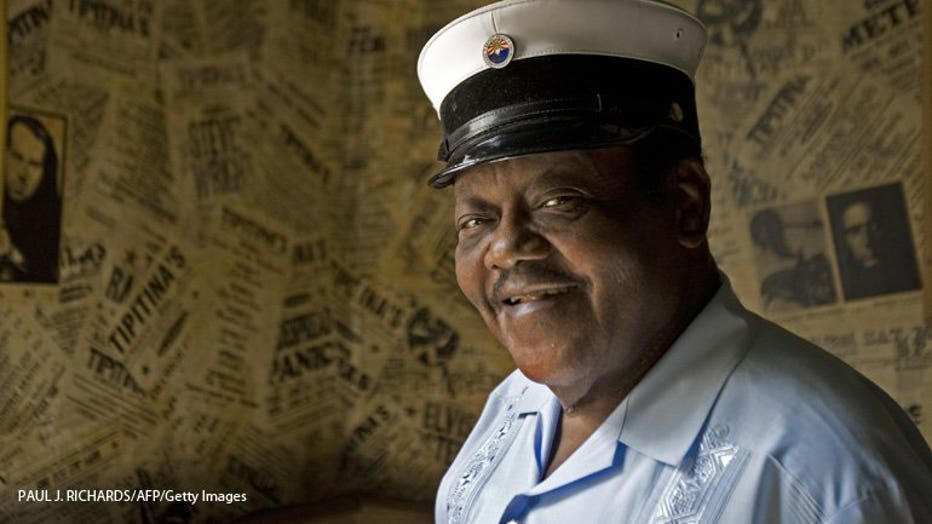 New Orleans resident and legendary pianoman Fats Domino pauses a moments for a photo after meeting with reporters 19 August 2007 to talk about his new 2- disk album 'Goin' Home: A Tribute to Fats Domino' to be released 25 September 2007. The album is

His dynamic performance style and warm vocals drew crowds for five decades. One of his show-stopping stunts was playing the piano while standing, throwing his body against it with the beat of the music and bumping the grand piano across the stage.

Domino's 1956 version of "Blueberry Hill" was selected for the Library of Congress' National Recording Registry of historic sound recordings worthy of preservation. The preservation board noted that Domino insisted on performing the song despite his producer's doubts, adding that Domino's "New Orleans roots are evident in the Creole inflected cadences that add richness and depth to the performance."

Domino became a global star but stayed true to his hometown, where his fate was initially unknown after Hurricane Katrina struck in August 2005. It turned out that he and his family were rescued by boat from his home, where he lost three pianos and dozens of gold and platinum records, along with other memorabilia. 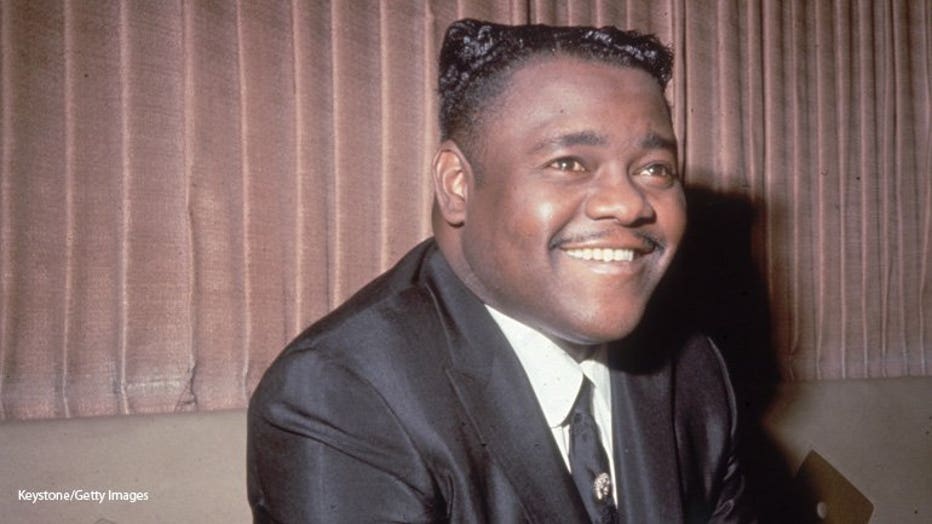 Many wondered if he would ever return to the stage. Scheduled to perform at the New Orleans Jazz and Heritage Festival in 2006, he simply tipped his hat to thousands of cheering fans.

But in May 2007, he was back, performing at Tipitina's music club in New Orleans. Fans cheered — and some cried — as Domino played "I'm Walkin'," ''Ain't It a Shame," ''Shake, Rattle and Roll," ''Blueberry Hill" and a host of other hits.

That performance was a highlight during several rough years. After losing their home and almost all their belongings to the floods, his wife of more than 50 years, Rosemary, died in April 2008. 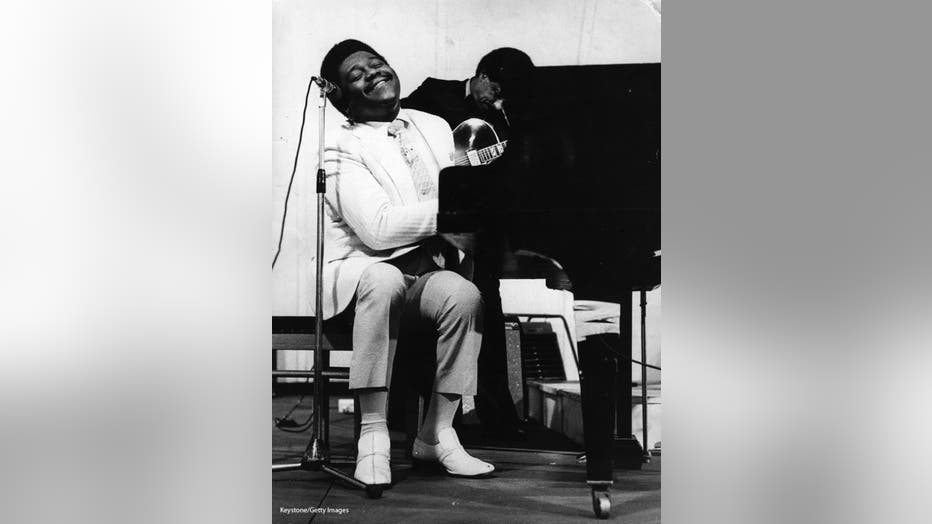 Domino moved to the New Orleans suburb of Harvey after the storm but would often visit his publishing house, an extension of his old home in the Lower 9th Ward, inspiring many with his determination to stay in the city he loved.

"Fats embodies everything good about New Orleans," his friend David Lind said in a 2008 interview. "He's warm, fun-loving, spiritual, creative and humble. You don't get more New Orleans than that."

The son of a violin player, Antoine Domino Jr. was born on Feb. 26, 1928, to a family that grew to include nine children. As a youth, he taught himself popular piano styles — ragtime, blues and boogie-woogie — after his cousin left an old upright in the house. Fats Waller and Albert Ammons were early influences.

He quit school at age 14, and worked days in a factory while playing and singing in local juke joints at night. In 1949, Domino was playing at the Hideaway Club for $3 a week when he was signed by Imperial record company.

He recorded his first song, "The Fat Man," in the back of a tiny French Quarter recording studio.

In 1955, he broke into the white pop charts with "Ain't it a Shame" — but actually sang the lyrics as "ain't that a shame." The song was covered blandly by Pat Boone as "Ain't That a Shame" and rocked out years later by Cheap Trick. Domino enjoyed a parade of successes through the early 1960s, including "Be My Guest" and "I'm Ready." Another hit, "I'm Walkin,'" became the debut single for Ricky Nelson.

Domino appeared in the rock 'n' roll film "The Girl Can't Help It" and was among the first black performers to be featured in popular music shows, starring with Buddy Holly and the Everly Brothers. He also helped bridge rock 'n' roll and other styles — even country/western, recording Hank Williams' "Jambalaya" and Bobby Charles' "Walkin' to New Orleans."

Like many of his peers, Domino's popularity tapered off in the 1960s as British and psychedelic rock held sway.

Domino told Ebony magazine that he stopped recording because companies wanted him to update his style.

"I refused to change," he said. "I had to stick to my own style that I've always used or it just wouldn't be me."

Antoine and Rosemary Domino raised eight children in the same ramshackle neighborhood where he grew up, but they did it in style — in a white mansion, trimmed in pink, yellow and lavender. The front double doors opened into an atrium with chandeliers hanging from the ceiling and ivory dominos set in a white marble floor.

In 1988, all of New Orleans seemed to be talking about him after he reportedly paid in cash for two Cadillacs and a $130,000 Rolls-Royce. When the salesman asked if he wanted to call his bank about financing, Domino smiled and said, "I am the bank."

In 1998, he became the first purely rock 'n' roll musician to be awarded the National Medal for the Arts. But he cited his age and didn't make the trip to the White House to get the medal from President Clinton.

That was typical. Aside from rare appearances in New Orleans, he dodged the spotlight in his later years, refusing to appear in public or even to give interviews.

Here is a look at the life of award winning singer, songwriter and pianist Fats Domino.

Other Facts:
Has sold over 65 million albums.
"Blueberry Hill," "Ain't That a Shame" and "I'm Walkin'" are some of his biggest hits.
The singer Chubby Checker's stage name was a word play on Fats Domino.

Timeline:
1949 - His album, "The Fat Man," is released. The single "The Fat Man" reaches #2 on the R&B charts and sells a million copies.
1986 - Inducted to the Rock & Roll Hall of Fame.
1987 - Receives the Grammy Lifetime Achievement Award.
1995 - Receives the Pioneer Award from the Rhythm & Blues Foundation.
1998 - Wins the National Medal for the Arts from the National Endowment for the Arts.
August 29, 2006 - President George W. Bush presents Domino with a new National Medal of the Arts. His first one was lost during Hurricane Katrina.
January 27, 2007 - Receives a Lifetime Achievement Award at the Best of the Beat Music Awards in New Orleans. Mayor Ray Nagin declares January 27, 2007, as Fats Domino Day.
November 22, 2008 - "Fats Domino: Walkin' Back to New Orleans," a documentary of his life, premieres on Louisiana Public Broadcast television.
May 30, 2009 - Is inducted into the Louisiana Music Hall of Fame. The ceremony is held in conjunction with a fundraiser, The Domino Effect, to rebuild schools and playgrounds. Little Richard accepts the plaque as Domino watches from a private suite nearby.
February 26, 2016 - PBS airs "The Big Beat: Fats Domino and the Birth of Rock 'n' Roll," a documentary film from director Joe Lauro.