KAWASAKI, Japan — A man carrying a knife in each hand and screaming "I will kill you!" attacked a group of schoolgirls near a school bus parked at a bus stop just outside Tokyo on Tuesday, killing two and injuring 17 before killing himself, officials said.

Most of the victims were students at a Catholic elementary school who were lined up at the bus stop near Noborito Park in the city of Kawasaki when a man in his 50s began slashing them with knives. City officials, quoting police, said the suspect was captured but died from a self-inflicted slash in his neck.

Witnesses described a hellish scene: children and adults falling to the ground, some with their shirts soaked with blood, dozens of children running and screaming for help, and school bags and books scattered on the ground. 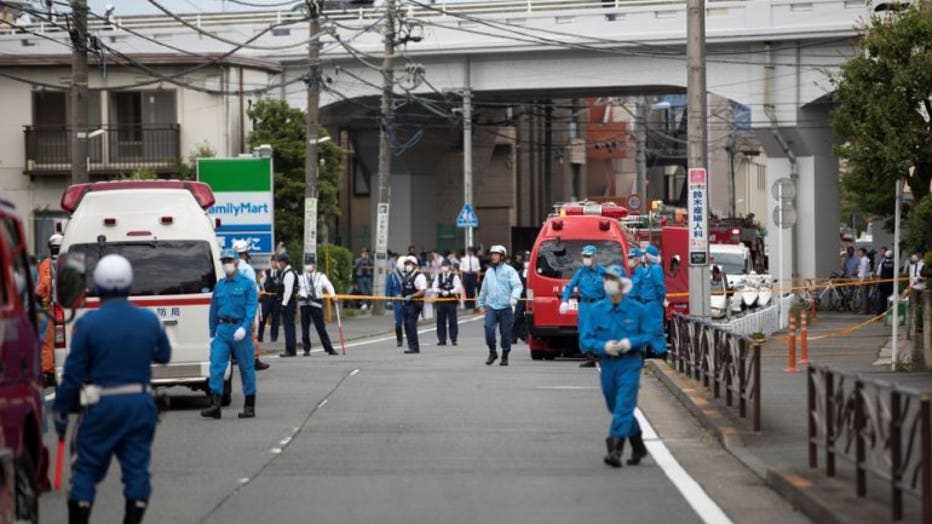 A general view shows multiple police cars, ambulances and fire engines at a crime scene where a man stabbed 19 people, including children in Kawasaki on May 28, 2019. - A knife-wielding attacker killed a 12-year-old schoolgirl and a man before stabbi

"I heard a scream so I stopped and turned around to see what happened. It was not a normal tone of voice," said Yasuko Atsukata. She said she saw one person collapse, and then another. "The color of their white shirts turned red after they collapsed, then I understood they got stabbed."

In a nearby parking lot, a frightened-looking boy was in shock with scratches on his face, hands and legs, apparently from falling to the ground as he ran for his life.

Police wouldn't confirm specifics about the attacker except that he died. His identity and motive weren't immediately known. 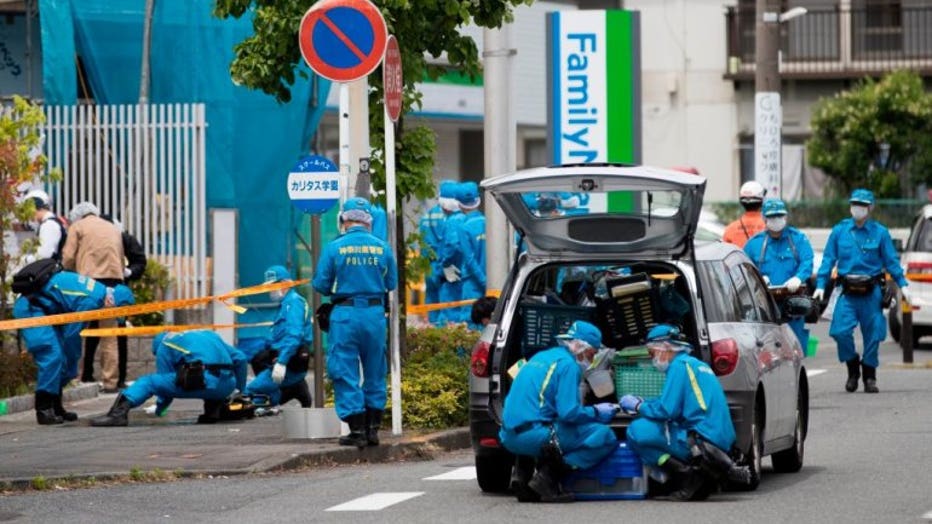 Police forensic experts work at the crime scene where a man stabbed 19 people, including children in Kawasaki on May 28, 2019. - A knife-wielding attacker killed a 12-year-old schoolgirl and a man before stabbing himself to death in a rampage outside

Kawasaki city official Masami Arai said most of the injured were students at Caritas Gakuen, a local Catholic school founded by Soeurs de la Charite de Quebec, an organization of Catholic nuns in Quebec City in Canada. Arai said three of the injuries were serious.

"We have sad news that one of our students was killed in the attack," school director Hiroaki Takamatsu said at a news conference, choked with emotion. "I don't know what to say to our students and their parents."

Kanagawa prefectural police confirmed 17 people were injured and three others had died, including a man "who is not a victim but linked to the case." Police identified two of the dead as 11-year-old Hanako Kuribayashi and Satoshi Oyama, a 39-year-old government employee who was taking his child to the bus stop.

Hospital officials said both had been slashed in the head, chest and face.

Witnesses said that as the attack unfolded, the bus driver shouted at the attacker, and as he was running away he cut his own neck, collapsing in a pool of blood as police seized him.

Japanese media including public broadcaster NHK said he was a 51-year-old resident of the city and that police found two more knives in his knapsack in addition to the two he was holding.

Television footage showed emergency workers giving first aid to people inside an orange tent set up on the street, and police and other officials carrying the injured to ambulances.

Prime Minister Shinzo Abe said he was outraged by the attack.

"Many small children were victimized, and I feel strong resentment," Abe said as he was hosting President Donald Trump on a four-day state visit, which ended Tuesday. "I will take all possible measures to protect the safety of children."

Although Japan has one of the lowest crime rates in the world, it has had a series of high-profile killings, including in 2016 when a former employee at a home for the disabled allegedly killed 19 people and injured more than 20 others.

Also in 2016, a man stabbed four people at a library in northeastern Japan, allegedly for mishandling his questions. No one was killed. In 2008, seven people were killed by a man who slammed a truck into a crowd of people in central Tokyo's Akihabara electronics district and then stabbed passers-by.