Associated Press reporters saw smoke rising from east Damascus and the sky turned orange. A huge fire could be seen from a distance to the east. Syrian television reported that a scientific research center had been hit.

"Good souls will not be humiliated," Syria's presidency tweeted after airstrikes began.

Trump announced Friday night that the three allies had launched military strikes to punish President Bashar Assad for the alleged chemical weapons use and to prevent him from doing it again.

The U.S. president said the U.S. is prepared to "sustain" pressure on Assad until he ends what the president called a criminal pattern of killing his own people with internationally banned chemical weapons. It was not immediately clear whether President Trump meant the allied military operation would extend beyond an initial nighttime round of missile strikes.

President Trump said the joint attack was expected to include barrages of cruise missiles launched from outside Syrian airspace. He described the main aim as establishing "a strong deterrent" against chemical weapons use.

The Syrian government has repeatedly denied any use of banned weapons.

The decision to strike, after days of deliberations, marked President Trump's second order to attack Syria; he authorized a barrage of Tomahawk cruise missiles to hit a single Syrian airfield in April 2017 in retaliation for Assad's use of sarin gas against civilians. 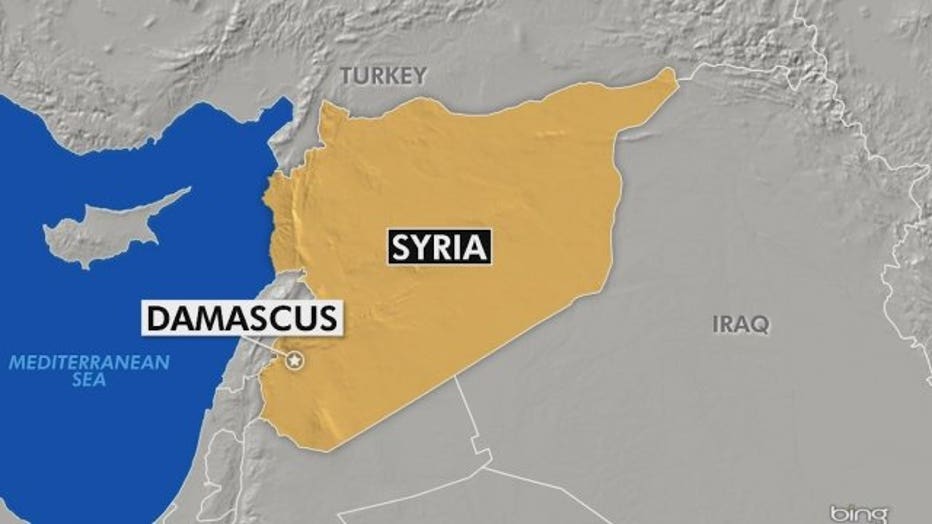 President Trump chastised Syria's two main allies, Russia and Iran, for their roles in supporting "murderous dictators," and noted that Russian President Vladimir Putin had guaranteed a 2013 international agreement for Assad to get rid of all of his chemical weapons. He called on Moscow to change course and join the West in seeking a more responsible regime in Damascus.

The allied operation comes a year after the U.S. missile strike that President Trump said was meant to deter Assad from further use of chemical weapons. Since that did not work, a more intense attack would aim to degrade his ability to carry out further such attacks, and would try to do this by hitting Syrian aircraft, military depots and chemical facilities, among other things.

The one-off missile strike in April 2017 targeted the airfield from which the Syrian aircraft had launched their gas attack. But the damage was limited, and a defiant Assad returned to episodic use of chlorine and perhaps other chemicals.

Friday's strikes appear to signal President Trump's willingness to draw the United States more deeply into the Syrian conflict. The participation of British and French forces enables President Trump to assert a wider international commitment against the use of chemical weapons, but the multi-pronged attack carries the risk of Russian retaliation.

In his nationwide address, President Trump stressed that he has no interest in a longtime fight with Syria.

"America does not seek an indefinite presence in Syria under no circumstances," he said. "As other nations step up their contributions, we look forward to the day when we can bring our warriors home."

The U.S. has about 2,000 troops on the ground in Syria as advisers to a makeshift group of anti-Islamic State fighters known as the Syrian Democratic Forces. They are in eastern Syria, far from Damascus. A U.S.-led coalition has been conducting airstrikes in Syria since September 2014 as part of a largely successful effort to break the IS grip on both Syria and Iraq.