ATLANTA (FOX5) -- Former Atlanta Police Officer Garrett Rolfe and Officer Devin Brosnan surrendered to authorities a day after the Fulton County District Attorney filed charges against them in connection to the shooting death of Rayshard Brooks. 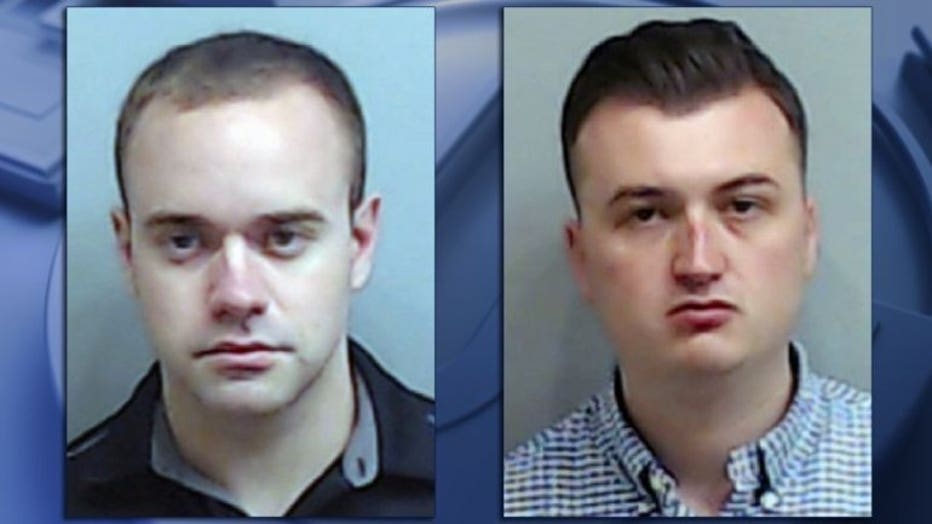 Brosnan, 26, had a signature bond on charges of aggravated assault and three counts of violating his oath of office in connection to Brooks' death. FOX 5 was there as Brosnan was seen leaving the Fulton County Jail.

Rolfe, the officer who pulled the trigger, faces 11 charges, including felony murder and multiple counts of assault with a deadly weapon. The felony murder charge against Rolfe, 27, carries life in prison or the death penalty if prosecutors decide to seek it.

Rolfe was terminated from the Atlanta Police Department shortly after the shooting.

Fulton County District Attorney Paul Howard announced the charges Wednesday. He said Brosnan stood on Brooks’ shoulder as he struggled for his life.

Brooks, 27, was shot and killed the night of June 12 at a Wendy's restaurant along University Avenue in southeast Atlanta. The officers were called over complaints of a car blocking the restaurant’s drive-thru lane.

A struggle ensued between Brooks and the officers when they attempted to handcuff him, dashcam video showed. In the struggle, Brooks grabbed a Taser and ran, firing it at the officer, Fulton County District Attorney Paul Howard said. Shots were fired at Brooks as he was running away, surveillance video from the Wendy's showed.

An autopsy revealed he was shot twice in the back.

Rolfe’s lawyers said he feared for his and others’ safety and was justified in shooting Brooks. Rolfe opened fire after hearing a sound “like a gunshot and saw a flash in front of him,” apparently from the Taser.

“Mr. Brooks violently attacked two officers and disarmed one of them. When Mr. Brooks turned and pointed an object at Officer Rolfe, any officer would have reasonably believed that he intended to disarm, disable or seriously injure him,” the lawyers said in a statement.

The prosecutor said Brooks “never presented himself as a threat” during a more than 40-minute interaction with officers before the shooting.

The decision to prosecute came less than five days after the killing rocked Atlanta — and the nation — already roiling from the death of George Floyd under a police officer’s knee in Minneapolis late last month.

Brosnan and Rolfe were given until 6 p.m. Thursday, June 18, to turn themselves in. Howard said he would request a $50,000 bond for Brosnan and no bail for Rolfe.