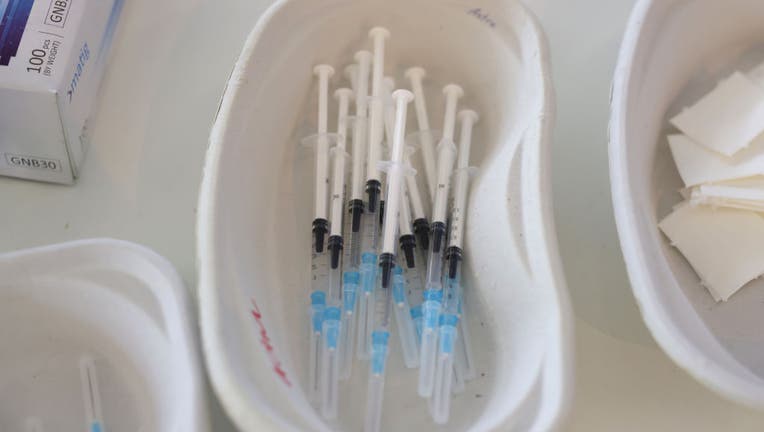 COLOGNE, GERMANY - MAY 09: Syringes of AstraZeneca vaccination against Covid-19 are pictured inside the city's main mosque, which has temporarily become a mass vaccination center, during the coronavirus pandemic on May 09, 2021 in Cologne, Germany. C

The EU Commission did not renew its order for AstraZeneca's COVID-19 vaccine, the European Union’s Internal Market Commissioner said Sunday.

"We have not renewed the order for after June. We’ll see what will happen next," Thierry Breton told French radio France Inter.

The announcement comes one day after the European Union cemented its support for Pfizer-BioNTech's vaccine by agreeing to a massive contract extension for a potential 1.8 billion doses through 2023.

The new contract, which has the unanimous backing of the 27 EU member nations, will entail not only the production of the vaccines but also making sure that all the essential components are sourced from the EU.

The contract also underscores the confidence the EU has shown in the technology behind the Pfizer-BioNTech vaccine, which is different from how the Oxford-AstraZeneca vaccine works.

The active ingredient in the Pfizer-BioNTech shot is messenger RNA, or mRNA, which contains the instructions for human cells to construct a harmless piece of the coronavirus called the spike protein. The human immune system recognizes the spike protein as foreign, allowing it to mount a response against the virus upon infection.

America’s Pfizer and Germany’s BioNTech have already said that they would provide the EU with an extra 50 million doses in the 2nd quarter of this year, making up for faltering deliveries of AstraZeneca. EU Commission President Ursula von der Leyen has said that Pfizer-BioNTech is a reliable partner that delivers on its commitments.

Two weeks ago, the EU launched legal proceedings against AstraZeneca for failing to respect the terms of its contract with the 27-nation bloc.

A spokesperson said the reason for the legal action was that "some terms of the contract have not been respected" and that "the company has not been in a position to come up with a reliable strategy to ensure a timely delivery of doses."

The AstraZeneca vaccine had been central to Europe’s immunization campaign, and a linchpin in the global strategy to get vaccines to poorer countries. But the slow pace of deliveries has frustrated the Europeans and they have held the company responsible for partly delaying their vaccine rollout.

AstraZeneca’s contract with the EU, which was signed by the Commission on behalf of the member countries last August, foresaw an initial 300 million doses for distribution among member countries, with an option for a further 100 million.

The British-Swedish drugmaker had hoped to deliver 80 million doses of that in the first quarter of 2021, but only 30 million were sent. According to the Commission, the company is now set to provide 70 million doses in the second quarter, rather than the 180 million it had promised.

AstraZeneca said in a statement that it "regrets" the Commission’s decision to take legal action and that it will "strongly defend" itself in court.

The White House says President Joe Biden is setting a new vaccination goal to deliver at least one dose to 70 percent of adult Americans by July 4.

RELATED: US to share millions of AstraZeneca COVID-19 vaccine doses with world after federal safety review

Meanwhile, the U.S. announced last month it will begin sharing its entire stock of AstraZeneca shots with the world once it clears federal safety reviews, with as many as 60 million doses expected to be available for export in the coming months.

The move greatly expands on the Biden administration's action to share about 4 million doses of the vaccine with Mexico and Canada. The AstraZeneca vaccine is widely in use around the world but has not yet been authorized by the U.S. Food and Drug Administration.

The White House is increasingly feeling assured about the supply of the three vaccines being administered in the U.S., particularly following the restart of the single-dose Johnson & Johnson shot. The U.S. has also been under mounting pressure in recent weeks to share more of its vaccine supply with the world, as countries like India experience devastating surges of the virus and others struggle to access doses needed to protect their most vulnerable populations.