It’s unknown if Antetokounmpo would have played in Thursday’s game against Memphis anyway, given that the Bucks have already secured the No. 1 overall seed in the NBA playoffs that start next week.

Antetokounmpo will be eligible for Game 1 of the Bucks’ first-round series against Brooklyn, which will almost certainly be played Monday or Tuesday at Walt Disney World.

The incident happened Tuesday night, when Wagner took a charge against Antetokounmpo in the second quarter. Antetokounmpo appeared to be speaking angrily, followed Wagner to the other end and the headbutt took place a few seconds later.

Antetokounmpo said after the game that the headbutt was a “terrible action” and that if he “could go back, turn back time and go back to that play, I wouldn’t do it.” He said he was frustrated by an accumulation of contact, on a night where he had already been awarded 12 free throws in his first 10 minutes of play.

Antetokounmpo was ejected from the game for the Flagrant-2 foul. He finishes the regular season with averages of 29.5 points, 13.6 rebounds and 5.6 assists, numbers that are likely good enough to win him a second consecutive NBA MVP award. 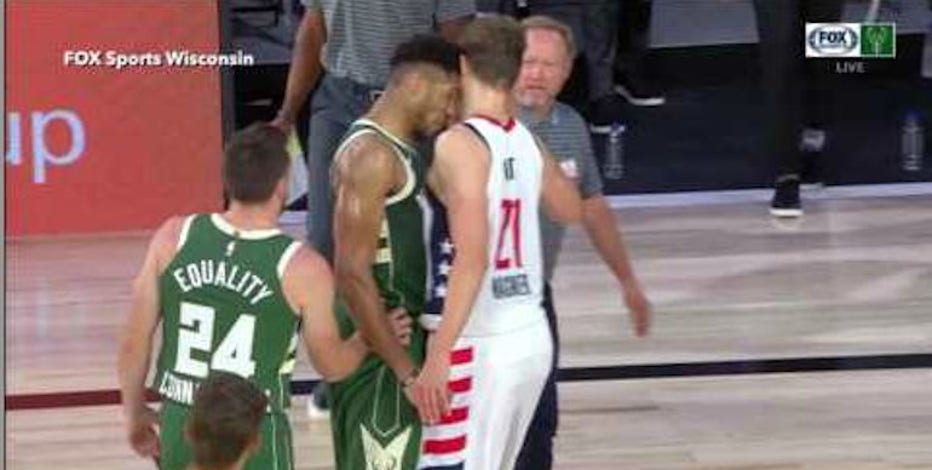 Moritz Wagner took a charge from Giannis Antetokounmpo, who didn’t like the call in what had become a physical game.