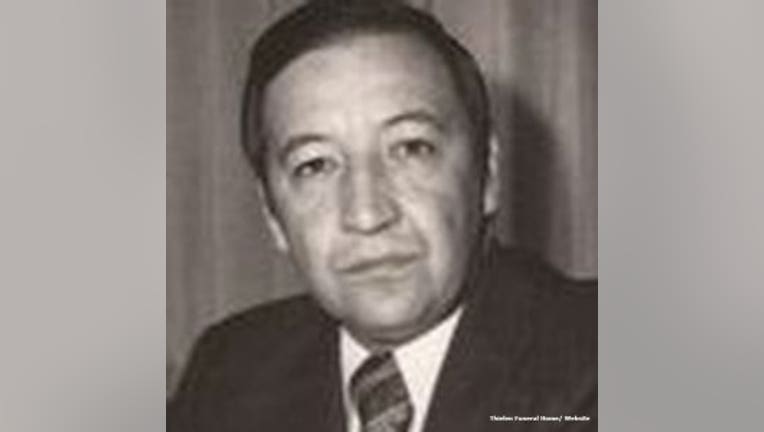 MILWAUKEE — Former Army Capt. Ernest L. Medina, a key figure in the My Lai massacre during the Vietnam war, has died in Wisconsin. He was 81.

Medina was an Army captain on March 16, 1968, when American troops under his command killed hundreds of unarmed Vietnamese civilians. He was acquitted in a court-martial over the massacre.

Medina died May 8, according to an obituary written by his family. No cause of death was given. He was being buried Monday.

Medina was captain of Charlie Company whose mission was to attack a crack Vietcong unit. The intelligence soldiers received was inaccurate and they encountered no resistance in the village of My Lai and a neighboring community. Charlie Company killed 504 villagers in just three to four hours, most of them women, children and elderly men.

It wasn't until more than a year later that news of the massacre became public.

Medina was accused of responsibility in the deaths of at least 182 civilians. Medina, whose platoon took up a position in reserve outside the village, said during his trial that he was not with the soldiers when the massacre happened and that he didn't know about it until it was over. Medina acknowledged killing one woman, but said he believed she was about to attack him.

Lt. William L. Calley Jr., who led the first platoon into My Lai, was the only one convicted of the 25 men originally charged in the massacre.

In a 1988 interview with The Associated Press, Medina looked back on My Lai as a "horrendous thing" that never should have happened.

"I have regrets for it, but I have no guilt over it because I didn't cause it," he said. "That's not what the military, particularly the United States Army, is trained for. But then again, maybe the war should have never happened. I think if everybody were to look at it in hindsight, I'm sure a lot of the politicians and generals would think of it otherwise. Maybe it was a war that we should have probably never gotten involved in as deeply as we did without the will to win it."

Medina earned a Silver Star for bravery for actions he took saving the lives of fellow soldiers during a battle shortly before My Lai. Although Medina was acquitted of murder and manslaughter for the My Lai killings, his 16½-year Army career was ruined and he resigned his commission. He moved with his wife and three children to Marinette, Wisconsin, in 1971. He worked as a salesman for a helicopter manufacturer for a while, and later went into real estate.

Medina was born in Springer, New Mexico, to Simon and Pauline Medina. Medina's mother died shortly after his birth and his grandparents raised him in Montrose, Colorado, according to his family's obituary.

Medina lied about his age to join the Colorado National Guard at 16, his family said. In 1956, he enlisted in the Army after briefly considering joining the seminary. Then, while stationed in Heilbronn, Germany, he met the woman he would eventually marry, Baerbel Dechandt.

"He quickly fell in love and declined an offer to take an exam to go to West Point Military Academy so that he could marry his soul mate," his obituary reads.

Ernie, as his family called him in the obituary, "craved time with family, friends, and working in the community."

"He also enjoyed having an occasional cigar, a good home-brew, trying to fill his endless garage with assorted 'collectibles,' and dreaming of restoring an antique Ford Model T and a 1960s VW Bug," his obituary reads.

According to the obituary, Medina is survived by his wife, daughter Ingrid Medina, sons Greg and Cecil Medina, eight grandchildren and his cousin, Ercelica Salomoni.