During Tuesday's Elmbrook School Board meeting, many parents spoke out against, and some for, critical race theory being incorporated into the curriculum.

BROOKFIELD, Wis. - It's a polarizing concept sweeping parts of the nation, and the conversation has made its way to the Elmbrook School District.

But what exactly is critical race theory, and could it be implemented in Brookfield?

The subject sent sparks flying during a Tuesday, May 11 school board meeting, and it wasn't even a discussion item on the agenda.

The conversation stems from the district's proposed equity principles that aim to get rid of opportunity gaps among students.

Seven states have introduced, some even passing legislation, that would ban teaching critical race theory (CRT) in schools, according to Newsweek.

What is critical race theory? It originated in the 1970s and examines how institutionalized racism and historical inequities shape public policy and social conditions today.

During Tuesday's meeting, many parents spoke out against, and some for, critical race theory being incorporated into the curriculum.

The conversation stemmed from a draft of the district's 2021-2022 strategy map, specifically its ‘Equity Principles.'

Harmeyer, who addressed the board, said he worries critical race theory will come next.

"That viewpoint of the world, which is a hyper-politicized, hyper-divisive view, one that divides and does not unify, is what the parents of the Elmbrook School District rejected," Harmeyer said. 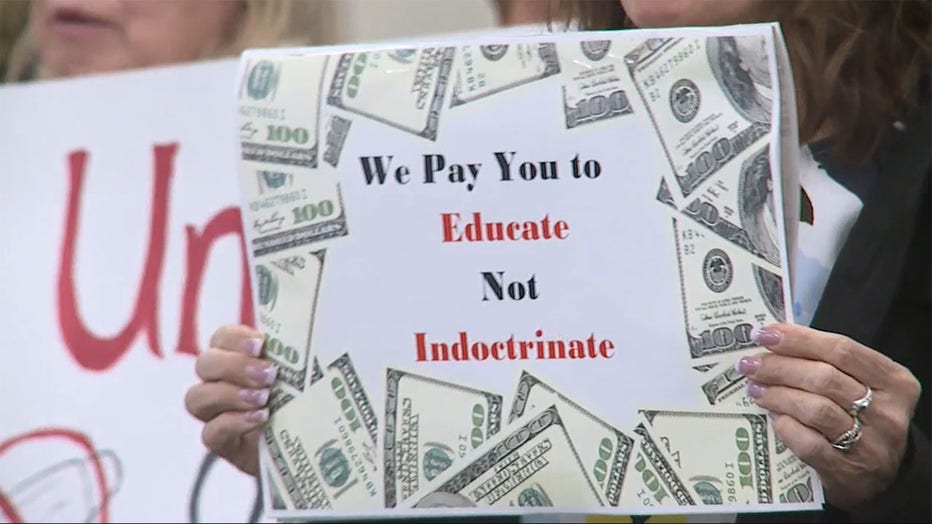 Hundreds of Elmbrook parents have signed a petition in agreement.

In the meantime, other parents, like Scott Lynch, said rejecting the idea would prevent progress.

"This issue is about inclusion, understanding and racial literacy, this is not about Marxism or leftist indoctrination," Lynch said. "You will not succeed in preparing students to solve tomorrow’s challenges if you limit students to the methods of the past and a world view that stretches no further than what they can already see."

In response to FOX6 News' questions about whether critical race theory is being considered in Elmbrook schools, Chief Strategy Officer Chris Thompson provided this statement:

"Our District has developed an annual strategy map for the past 10 years to guide our continuous improvement efforts. This year, our work expanded beyond our mission, vision, core values, strategic objectives, district goals and key performance indicators, to include consideration of the Equity Principles and how they might be reflected in our District’s Strategy.

"As was presented at last evening’s school board meeting, our work on equity is centered on removing barriers to teaching and learning and closing opportunity gaps for all students. This has been central to our mission (To educate and inspire every student to think, to learn and to succeed) for many years.

"It is unfortunate that a small number of people in our community have errantly connected our work on equity, as well as our proposed Equity Principles, to a national agenda about critical race theory. In Elmbrook, it is a false narrative, is not part of our curriculum, has not been a part of our teacher training, and is a distraction to our focus on meeting the needs of all students.

"The Equity Principles have been drafted to provide a framework for expanding opportunities and removing barriers to accessing teaching and learning for all students. We will use these Principles to guide many of our key processes in the District; from staffing to curriculum renewal. Evidence of this work will be realized in the following ways:

"Some of this work can be found on the attached document pages 5-6 entitled, ‘Prioritized Opportunity Gaps.’"

There is a lot more to unpack when it comes to the subject. Next week, the board plans to host a community forum, specifically about the equity principles discussed Tuesday night. It will be an opportunity for more parents to speak on the subject.

No date or time has been set, but the board agreed it should be held in a larger space.

Upcoming meetings and listening sessions will be posted HERE.

Tuesday's board meeting can be viewed in its entirety HERE.

It's an issue that's being debated in just about every Wisconsin school district, sometimes more passionately than others. It's the question of how students can safely learn in person and for how long they need to wear masks to do so.