Dialysis patient Brian Pinker, 82, was the first to get the new vaccine shot, administered by the chief nurse at Oxford University Hospital. (Credit: OUH via Storyful)

The Dutch decision comes three days after authorities in Germany also stopped using the AstraZeneca’s vaccine in the under-60s, citing fresh concerns over unusual blood clots reported in a tiny number of those who received the shots.

Earlier Friday, a Dutch organization that monitors vaccine side effects said it had received five reports of blood clots with low blood plate counts following vaccinations. All the cases occurred between seven and 10 days after the vaccinations and all the people affected were women aged between 25 and 65 years. 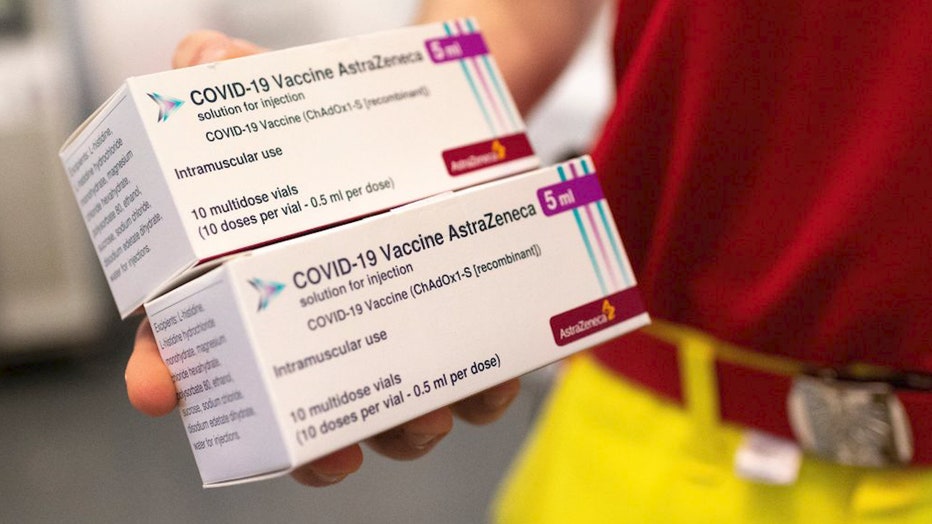 FILE - A health worker holds boxes with AstraZeneca's vaccines against the coronavirus SARS-CoV-2 on April 2, 2021.

The organization said in the period when the five cases were reported, some 400,000 people were vaccinated in the Netherlands with the AstraZeneca shot.

"I think it is very important that the Dutch reports are also properly investigated," De Jonge said. "We must err on the side of caution."

The news is another setback for the AstraZeneca vaccine, which is critical to Europe’s immunization campaign and a linchpin in the global strategy to get shots to poorer countries, for it is cheaper and easier to use than rival vaccines from Pfizer and Moderna. It comes two weeks after the EU drug regulator said the vaccine does not increase the overall incidence of blood clots following a similar scare.

RELATED: AstraZeneca vaccine use again suspended for people under 60 in parts of Germany

The European Medicines Agency said at the time that the benefits of vaccination outweigh the risks, but it could not rule out a link between the shot and some unusual kinds of clots, and recommended adding a warning about possible rare side effects.

Most European Union countries, including Germany, resumed using the AstraZeneca vaccine on March 19.

De Jonge said the Dutch pause comes ahead of an update next week from the EU medicines agency on the AstraZeneca vaccine.