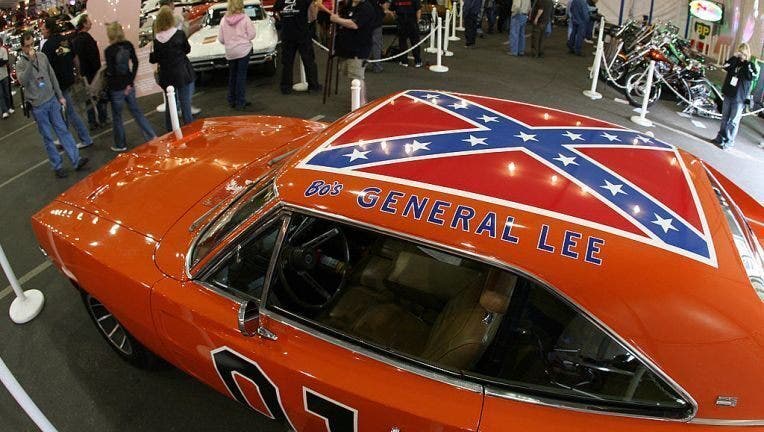 A 1969 Dodge Charger, dubbed "The General Lee" from the TV series "The Dukes of Hazzard", is displayed during the 37th Annual Barrett-Jackson Collector Cars auction in Scottsdale, Arizona, 16 January 2008. (Photo credit: GABRIEL BOUYS/AFP via Getty I

VOLO, Ill. -- The stars of the “Dukes of Hazzard” have spoken out about renewed criticism with the Confederate flag printed on the top of their signature orange car, The General Lee.

“The Dukes of Hazzard” television show ran from 1979 until 1985 and took place in the fictional Hazzard County, Ga. The show has come under fire in recent years as conversations about Confederate symbols and statues have become a hot-button issue. Following ongoing conversations about systemic racism happening in the wake of the May 25 death of George Floyd while in police custody, the Duke Boys’ car has been thrust into the public spotlight once again.

Speaking to The Hollywood Reporter, Bo and Luke Duke actors John Schneider and Tom Wopat discussed their feelings on The General Lee having a Confederate flag painted on its roof and what that means for the show going forward.

“I have never had an African American come up to me and have any problem with it whatsoever," Schneider told the outlet, adding, “the whole politically correct generation has gotten way out of hand."

His co-star, however, struck a decidedly more diplomatic tone, telling the outlet: “The situation in the country has obviously changed in the last 40 years. I feel fortunate to be living in a time when we can address some of the injustices of the past.”

He added that “the car is innocent.”

Schneider went on to assert that the show was made with families in mind, regardless of race, and that the show has now been blacklisted in Hollywood, depriving modern viewers of everything else the show contained other than The General Lee.

"’Dukes of Hazzard’ was a unifying force. Mom, grandma, everyone wanted to watch it together. But who benefits from division?" he told the outlet. "’The Dukes of Hazzard’ has been shot down, I believe unfairly. We haven’t missed a generation yet, but we may miss this next one."

The show’s creator, Gy Waldron, echoed those sentiments, saying that he grew up recognizing the flag as a symbol of Southern pride rather than a symbol of racism flown by soldiers fighting to keep the institution of slavery.

"I had relatives fight on both sides of the Civil War and we honored both the American and Confederate flags," Waldron, 87, said. "No one even connected the Confederate flag with slavery. It was simply a part of our Southern culture."

Recently, a northern Illinois auto museum announced it made the decision not to remove the car from its display.

“We feel the car is part of history, and people love it. We’ve got people of all races and nationalities that remember the TV show and aren’t offended by it whatsoever. It’s a piece of history, and it’s in a museum,” Brian Grams, Volo Auto Museum director, told the Northwest Herald.

The Volo Auto Museum holds the last 1969 Dodge Charger used during the first season of the classic television series, which it acquired back in 2005.