SHAWANO COUNTY -- A former Shawano County firefighter faces arson charges, accused of setting fire to a home his family owns at the end of February, and prosecutors said he and a friend admitted to doing so while in search of "gold nuggets." According to prosecutors, the men, who were "drunk and bored," believed they could find $20,000 worth of the nuggets on the property, along with hood ornaments they planned to sell. The former firefighter allegedly called the fire in, and drove a fire truck to the scene, while drunk.

Corey Welch, 34, of Mattoon faces six felonies and one misdemeanor: 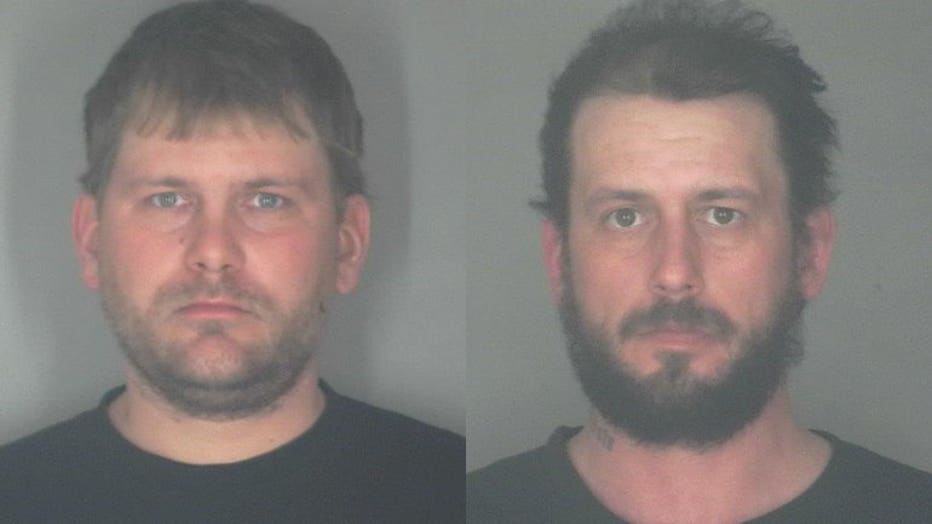 According to a criminal complaint, the property where the fire occurred on Feb. 29 on Hutchwood Road in the Town of Hutchins is owned by Corey Welch's family. The complaint said it took an initial 61,000 gallons of water to extinguish it, and there were two flare-ups -- where firefighters had to return to the scene.

Prosecutors said after setting the fire with diesel fuel and paper, Corey Welch called 911 to report it, and soon drove a Mattoon Fire Department fire truck to the scene while under the influence of alcohol. The complaint said a K-9 alerted to accelerants at the scene, and Welch's vehicle was parked out front. There were footprints going toward the house, and initially, flames visible from the door and window.

At the scene, the complaint said a Mattoon fire captain reported seeing Welch fall in the roadway -- and at least seven more times. He was seen wearing disheveled turnout gear that was the wrong size, and he had no firefighter helmet on. He was staggering, prosecutors said, and there was an odor of intoxicants coming from him. The complaint said he denied drinking, and "squared off" with the captain as if he was going to throw a punch. The captain called the chief, who responded to the scene, and was soon seen talking Welch by the arm -- escorting him to a vehicle.

The complaint said when Welch's co-defendant, Bryan Wendler, was asked what he was doing on scene, he responded that it was "none of his damn business," indicating the farm was his grandpa's. The complaint said Wendler completed fire inspection training one week before the fire in Mattoon, where he worked as a mechanic.

The Mattoon fire chief told investigators Welch was "bombed" at the scene, but only admitted to having one beer. The chief learned Welch had driven a fire truck to the scene, the complaint said.

Welch was interviewed by investigators at his home, and prosecutors said he lied about the fire -- indicating he drove by the house that was on fire, called 911, drove to the fire department, and then responded to the fire. The chief told investigators Welch quit the department at the end of January, and the complaint noted a Facebook post from Welch that indicated he was quitting on Jan. 30. with Welch writing, "Sorry to all but I'm going to quit all work with the FD on Jan. 30." When asked about that, the complaint said Welch indicated he hadn't quit but was instead on a leave of absence. He said he was a passenger in the truck en route to the fire.

The complaint said Welch later confessed, indicating he and Wendler went to the house to see if they could find gold nuggets the former owner got from the sale of farm equipment that no one had found, and some Mack Truck hood ornaments they planned to sell. Welch said he brought a Sun Drop bottle filled with diesel fuel to the home, driving there with Wendler, and Welch said he poured the diesel fuel on the floor and lit a piece of paper on fire. He said he "didn't really have a reason" for setting the fire. He said he had about eight to 10 beers before the fire, and after the fire, they drove to a friend's house, who wasn't home, and then had a beer at a bar, with Wendler purchasing a 12-pack at a gas station. They then drove towards Mattoon. Welch said he "felt bad about starting the fire," saw smoke, and called 911 before driving to the fire station, according to the complaint.

At the scene of the fire, the complaint said Welch was caught on camera on his knee, with two other firefighters looking at him -- with the home fully engulfed. Another firefighter said Welch fell "flat on his face" in front of her, and she believed he was intoxicated. At the scene, Welch reportedly asked, "Why the (expletive) are they even putting it out?" The firefighter responded, "Because it's our job." The firefighter told Welch to go help, and told the chief Welch was "bombed." Another firefighter reported seeing Welch at the fire department in the truck and asked, "I thought you quit." Welch responded, "I'm still going out to this call."

During the drive to the scene, the complaint said Welch was "driving too fast," with the tires squealing at one point.

Wendler also lied about the fire, prosecutors said, before admitting he was with Welch. He said they were "drunk and bored," and went to the house to find gold nuggets and Mack hood ornaments -- not to sell, but to hang onto as keepsakes. He said he saw Welch pour diesel fuel in the home and he ran out when Welch lit the paper on fire. He said he was "okay with stealing some stuff, but not burning the house down." He said they stopped at a friend's house for a few minutes before driving to a bar. Wendler said he bought beer at a gas station and they drove to the fire department. He said he didn't see Welch until later that night. He said he drove Welch's vehicle to the fire, talked to firefighters, and then left. He noted he was out on bond for his eighth OWI, with sentencing set for the end of March. The complaint noted he consumed alcohol and drove in violation of his bond.

Wendler said Welch asked him to take the rap for the fire because he was already going to prison for drunk driving, and Welch has five children.