EL PASO, Texas (Border Report) — The fate of 700,000 young immigrants hangs in the balance as the U.S. Supreme Court hears arguments on Tuesday regarding the legality of the Deferred Action for Childhood Arrivals (DACA) program.

The program in 2012 allowed people who were brought into the country illegally before age 16 to be spared deportation and get work permits — something that has allowed many of them to graduate from college and work in professional fields.

President Trump ended the program in 2017, saying that the Obama administration had no legal basis to enact it. The termination drew lawsuits from immigrant advocacy groups whose merits the Supreme Court will weigh. As the process plays out over the next few months (a decision could come any time between January and June, according to experts), program beneficiaries in Texas say they won’t give up if they lose.

“Regardless of the outcome, even if it comes out negative, this is our home. We are going to continue to fight to stay here,” said Sandra Avalos, a DACA recipient from the Dallas area and vice president of the North Texas Dream Team. 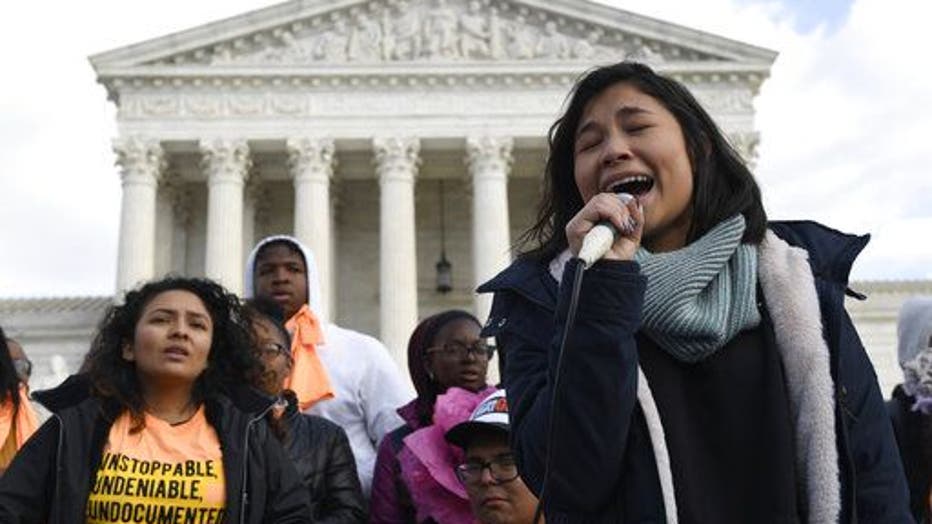 Young immigrants and advocacy groups held rallies across the country in anticipation of the Supreme Court decision on the DACA program. (AP photo)

Like many of the “dreamers,” Avalos was brought into the country by her parents at a very young age. Since she was 7, she’s attended American public schools and, since getting DACA, she’s been able to work legally and has stepped up her community activism.

“All of the dreamers I’ve met are doing everything we ask them to do: they’re getting good grades, they’re finishing their education, they’re working hard,” Holguin said. “And these are young people we have already invested a lot in. Many of them hold professional degrees and are contributing to the community in many, many ways, yet the (Trump) administration wants to deport them.”

Avalos said the immediate fear among the “dreamers” is not so much being deported but losing their jobs and health insurance. Win or lose at the Supreme Court, they plan to press lawmakers and candidates in the 2020 mid-term elections to legalize and provide them with a path to citizenship.

“Even if the outcome is positive, we will stress to elected officials at every level that it’s important for them to act and provide all people, including immigrants, a stable and secure future,” Avalos said.

A public opinion poll released in May put support for legalizing the “dreamers” at 75 and 77 percent — roughly the same three-out-of-four level of support as in 2017. A bill called the Dream and Promise Act of 2019 is already on the table, but the Republican-controlled Senate is reluctant to consider it if it passes a House vote.

That’s because Republicans for a long time have been demanding more resources for border and national security in exchange for a “yes” vote in favor of the “dreamers,” said Sheridan Aguirre, spokesman for United We Dream.

“Whenever a president has come into office he’s made promises of immigration reform that typically translate in Capitol Hill as ‘we will have citizenship in exchange for’ more money for the wall or border surveillance or increasing staff at ICE (Immigration and Customs Enforcement) and CBP (Customs and Border Protection). We don’t want any of that,” Aguirre said. “We believe presidential candidates can have a platform supporting people and giving them protection without beefing up agencies that are already causing harm to our communities.”

Aguirre added that DACA is good as temporary protection for the young immigrants, but that the goal is to have a permanent solution to their immigration status.

Aguirre said “dreamers” and supporters have mobilized nationwide in the past few days, staging school walkouts in which many of their teachers participated. A march is planned in the next few days at the office of Texas Attorney General Ken Paxton, Aguirre said.

Immigration attorney Holguin said “dreamers” should stay abreast of the developments at the Supreme Court and also be attentive to the details of their individual situation.

“Make sure that you know everything that’s happening. If you’re not sure if something applies to you, reach out to a certified immigration attorney for advice and legal information. Just be as informed as possible,” she said.