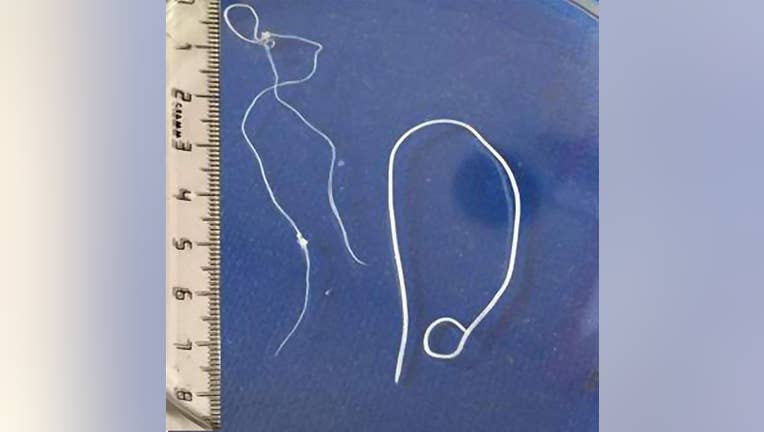 File of a previous dirofilaria repens case in a human. (Wikimedia Commons)

MOSCOW -- A Russian woman who watched perplexed as a lump appeared on her face and then moved from one place to the next discovered the lump was alive.

Specifically, the woman had a parasitic worm, whose movement she tracked in selfies. Per LiveScience, the woman first photographed the lump below her eye near the nose before it moved to her eyelid and then to her lip, where the infestation caused some serious swelling.

The case appeared this month in the New England Journal of Medicine, where it was reported that the 32-year-old patient saw an ophthalmologist after two weeks of the lump moving around her face. DNA testing subsequently revealed the removed creature to be the parasitic nematode known as Dirofilaria repens.

As LiveScience notes, it's ironically a species without much of an appetite for human faces. Dirofilaria repens typically infests dogs and other carnivores and finds itself unable to breed when a human becomes the unlucky host through the bite of a mosquito, typically in parts of Europe and Asia.

The patient reportedly told physicians she'd traveled outside Moscow to rural Russia, where she'd been the victim of a lot of mosquito bites. While hundreds of cases have been studied in Russia, Dirofilaria repens appeared to move beneath the skin in only about 35% of them. This patient made a full recovery once the worm was removed surgically.