Authorities say a North Carolina sheriff’s deputy has died and a K-9 officer has been wounded after a shooting at a home led to a continuing standoff. (Source: WBTV/NNS via FOX Edge)

BOONE, N.C. (AP) - Two deputies were killed and three other people including a suspected gunman were found dead after a lengthy standoff in North Carolina, a sheriff's office said Thursday.

The Watauga County Sheriff’s office said Sgt. Chris Ward and K-9 Deputy Logan Fox were dispatched to a home in Boone at 9:44 a.m. Wednesday after the homeowner and his family didn’t report to work or answer telephone calls. Both were hit by gunfire. Other officers were able to pull out Ward, who later died at a hospital. Fox died at the scene.

A Boone Police officer, a Boone firefighter and an Appalachian State University police officer were shot at during an initial attempt to rescue the deputies, and the Boone police officer was hit, but he escaped injury to his Kevlar helmet equipment, Hagaman told WSOC.

Morganton Department of Public Safety Maj. Ryan Lander told The News Herald just before 11 p.m. that the suspect appeared to have killed himself, the newspaper reported. 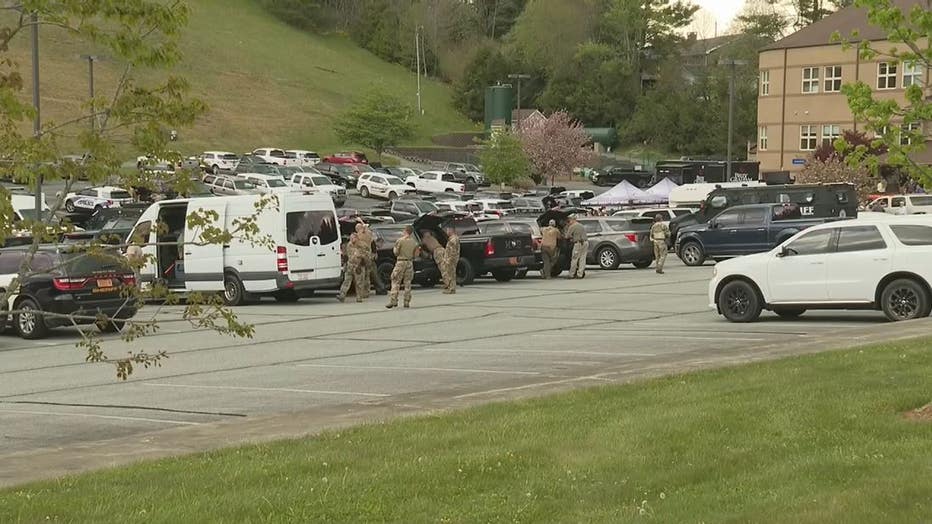 Authorities say a North Carolina sheriff’s deputy has died and a K-9 officer has been wounded after a shooting at a home led to a continuing standoff.(Source: WJZY via FOX Edge)

"This is an incredibly tragic situation and our thoughts and prayers are with everyone involved as well as their families and our community," Hagaman said. "I greatly appreciate the tremendous support we are receiving from law enforcement agencies across the region and the state."

The sheriff’s office said officers from approximately 15 law enforcement agencies surrounded the home. Other people living nearby were evacuated or told to shelter in place as the standoff lasted throughout the day and Wednesday night.

Clarence Wilson, 78, was on his porch when deputies pulled up in front of the house across the street. Gunfire erupted after the deputies arrived, Wilson said.

"Then they told me to get back in the house and stay," he said.

Wilson said he later saw officers pull a man from the house.

"I don’t know if it was a deputy or who it was," he said. "I was just worried about keeping myself safe."

Wilson said he heard a second barrage of gunfire around noon as the house remained surrounded.

North Carolina Gov. Roy Cooper said he spoke with the sheriff to offer support and express his condolences.

"We grieve for Sgt. Chris Ward, K-9 Deputy Logan Fox and the entire Watauga County law enforcement community today," Cooper tweeted. "These horrific shootings that claimed lives and loved ones show the ever-present danger law enforcement can encounter in the line of duty."