NAMCHE, Nepal — Nepal's reluctance to limit the number of permits it issues to scale Mount Everest has contributed to dangerous overcrowding, with inexperienced climbers impeding others and causing deadly delays, seasoned mountaineers said.

During the short period this season when the weather was clear enough to attempt the summit, climbers were crammed crampon-to-crampon above South Col's sharp-edged ridge, all clipped onto a single line of rope, trudging toward the top of the world and risking death as each minute ticked by.

"There were more people on Everest than there should be," said Kul Bahadur Gurung, general secretary of the Nepal Mountaineering Association, an umbrella group of all expedition operators in Nepal.

Eleven people have died this season, the highest number since 2015. Most are believed to have suffered from altitude sickness, which is caused by low amounts of oxygen at high elevation and can cause headaches, vomiting, shortness of breath and mental confusion. 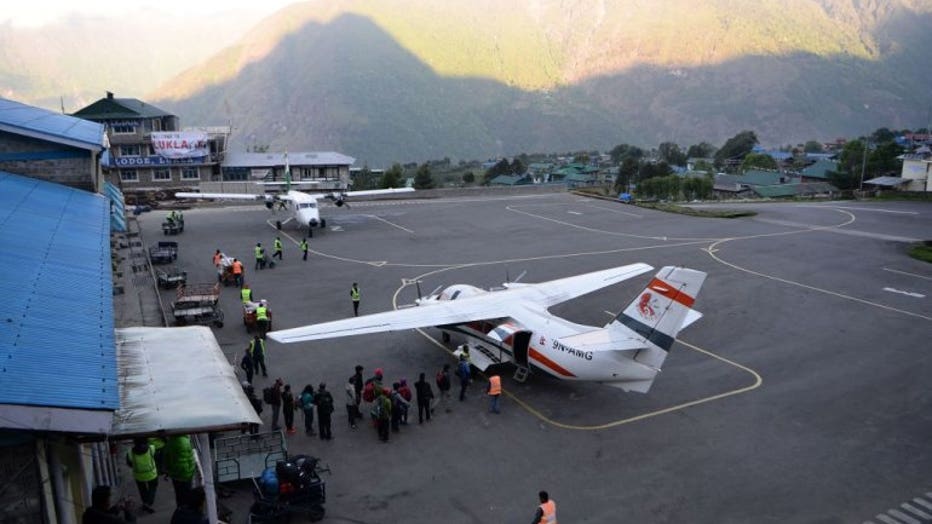 A private aircraft taxis is seen at the Tenzing-Hillary Airport in Lukla, some 140 km northeast of Kathmandu, on May 27, 2019. - Ten people have died in little more than two weeks after poor weather cut the climbing window, leaving mountaineers waiti

Once only accessible to well-heeled elite mountaineers, Nepal's booming climbing market has driven down the cost of an expedition, opening Everest up to hobbyists and adventure-seekers. They are required to have a doctors' note deeming them physically fit, but not to prove their stamina at such extreme heights.

Because of the altitude, climbers have just hours to reach the top before they are at risk of a pulmonary edema, when the lungs fill with liquid. From Camp Four at 8,000 meters (26,240 feet) to the 8,850-meter (29,035-foot) peak, the final push on Everest is known as the "death zone."

The conditions are so intense at such times that when a person dies, no one can afford to expend energy on carrying the body down from the mountain.

"Every minute counts there," said Eric Murphy, a mountain guide from Bellingham, Washington, who climbed Everest for a third time on May 23. He said what should have taken 12 hours took 17 hours because of struggling climbers who were clearly exhausted but had no one to guide or help them.

Just a handful of inexperienced climbers, he said, is "enough to have a profound effect."

The deaths this year on Nepal's side of the mountain included Don Cash, a sales executive from Utah, and Christopher Kulish, an attorney from Colorado, who both died on their way down from the peak.

Nepal doesn't have any regulations on the books to determine how many permits should be issued, so anyone with a doctor's note can obtain one for a $11,000 fee, said Mohan Krishna Sapkota, secretary at the Ministry of Tourism and Civil Aviation.

This year, permits were issued to 381 people, the highest number ever, according to the government. They were accompanied by an equal number of guides from Nepal's ethnic Sherpa community. Some climbers were originally issued permits in 2014 that were revoked mid-season when 16 Sherpa guides died in an avalanche and other Sherpas, whose support as guides and porters is essential, effectively went on strike.

Another factor was China's limit on the number of permits it issued for routes in its territory on the north side of Everest this year for a clean-up. Both the north and south sides of the mountain are littered with empty oxygen canisters, food packaging and other debris.

Instead of the overcrowding, Sapkota blamed the weather, equipment and inadequate supplemental oxygen for this year's deaths.

"There has been concern about the number of climbers on Mount Everest but it is not because of the traffic jam that there were casualties," Sapkota said in Namche, the town that serves as the staging area for Everest trips.

Still, he said, "In the next season we will work to have double rope in the area below the summit so there is better management of the flow of climbers."

Instead of limiting the number of people who attempt to reach Everest's peak, Saptoka said Nepal's government will encourage even more tourists and climbers to come "for both pleasure and fame."

Mirza Ali, a Pakistani mountaineer and tour company owner who reached Everest's peak for the first time this month, on his fourth attempt, said such an approach was flawed.

"Everybody wants to stand on top of the world," but tourists unprepared for the extremes of Everest endanger the entire industry, he said.

"There is not a sufficient check on issuing the permits," Ali said. "The more people come, the more permits, more business. But on the other side it is a lot of risk because it is costing lives."

Indian climber Ameesha Chauhan, recovering from frostbitten toes at a hospital in Kathmandu, described the agony of turning away from the peak when she realized her supplemental oxygen supply was low.

Two of her team members died on the May 16 ascent.

She returned and scaled the peak a week later.

"Many climbers are too focused on reaching the summit," she said. "They are not only risking themselves but also putting others at risk."