WAUKESHA, Wis. - Darrell Brooks will be sentenced on Nov. 15-16 following his conviction on 76 charges in connection with the Waukesha Christmas parade attack in November 2021. He did not address an appeal in court Monday when sentencing was scheduled, but in a letter Friday, he said he intends to do so.

Brooks appeared in front of Judge Jennifer Dorow on Monday, Oct. 31 to schedule that sentencing and sort out other logistics tied to the hearing.

Deputy District Attorney Lesli Boese said they expected 36 victims to speak at sentencing, and she estimated it could take 4 to 4.5 hours. Brooks said "20 or more" people would speak on his behalf. Brooks brought up his Milwaukee court cases and said he was busy preparing for his December trial and noted concern about jeopardizing the Milwaukee cases. He asked for enough time and more information.

"I still have to be prepared," said Brooks. "It would be a big help and a great benefit if I can just have a little more time to tie up the loose ends."

Boese said she wanted sentencing completed before Nov. 21, 2022, the one-year anniversary of the parade attack.

Dorow scheduled sentencing for Nov. 15-16 and said she would make Zoom available for victims/families for this sentencing hearing.

Brooks says: ‘I plan to appeal’

Brooks did object and said he did not understand. Dorow explained that the search warrants would become public record. Despite his objection, Dorow ordered them unsealed.

Brooks mentioned a letter sent to Judge Dorow Friday, Oct. 28 indicating he was on "suicide protocol." He said he was placed on suicide watch after his convictions Wednesday, Oct. 26. 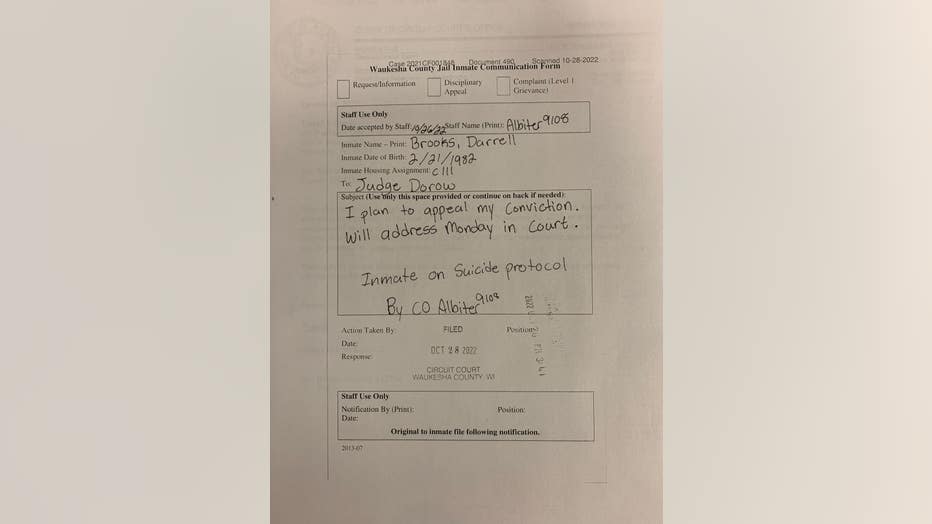 His letter further reads: "I plan to appeal my conviction, will address Monday in court."

Brooks did not address an appeal in court Monday.

Brooks also brought up "shock shackles," saying it was a "fact" that he wore them during the trial. He made a comment in front of the jury that he had a shock device on his ankle throughout the nearly month-long trial. The judge said that wasn't true and worked to correct the court record. She said deputies would provide photos. The judge ordered the images to remain under seal as releasing them to the public would create a security issue for future trials.

"I think the public should know there was a shock device in my ankles," said Brooks.

"There was no shock device," said Dorow. "I have the photographs."

"The public should know that I had a shock device on my ankles," said Brooks.

Less than 15 minutes into the hearing, Dorow moved Brooks to the adjacent courtroom because of his continued outbursts. Dorow said he was disruptive and challenged the court multiple times.

"Mr. Brooks, I'm in charge of the record and not you," said Judge Dorow.

With Brooks muted, Dorow said it was "absolutely false" that Brooks had a stun belt, explaining that he had a soft strap attached to the table and that this was done for his benefit to shield the jury from seeing that he was in custody.

Nicholas Kibler, a deputy with the Waukesha County Sheriff's Department, testified that soft restraint was used -- not electronic. Dorow asked if any other type of electronic or stun device was used, and Kibler said "no."

"You can't practice law from the bench. None of your deputies told me they were shock devices?" said Brooks.

"It was either myself or another deputy putting them on and never told you they were electronic," said Kibler.

Kibler said the restraints would have limited Brooks' movements, giving deputies time to get him under control.

Brooks and Dorow argued before Kibler stepped down from the stand. Dorow asked him to submit the names of any and all deputies involved if he had them.

Even after his convictions, Brooks again brought up subject matter jurisdiction during Monday's hearing.

A jury found Brooks guilty on all counts Wednesday, Oct. 26 in the Waukesha Christmas parade attack that took place Nov. 21, 2021. The jury deliberated for less than three hours. This, after a more than three-week trial that was, perhaps, unlike any other we've seen. Brooks was convicted of all 76 counts, including six counts of first-degree intentional homicide.

Brooks faces mandatory life in prison for each of six first-degree intentional homicide convictions. In addition, he was convicted on 70 other charges in the Waukesha Christmas parade attack.

Dorow must decide the sentences. It will also be up to the judge whether any or all of them will be concurrent or consecutive to others. 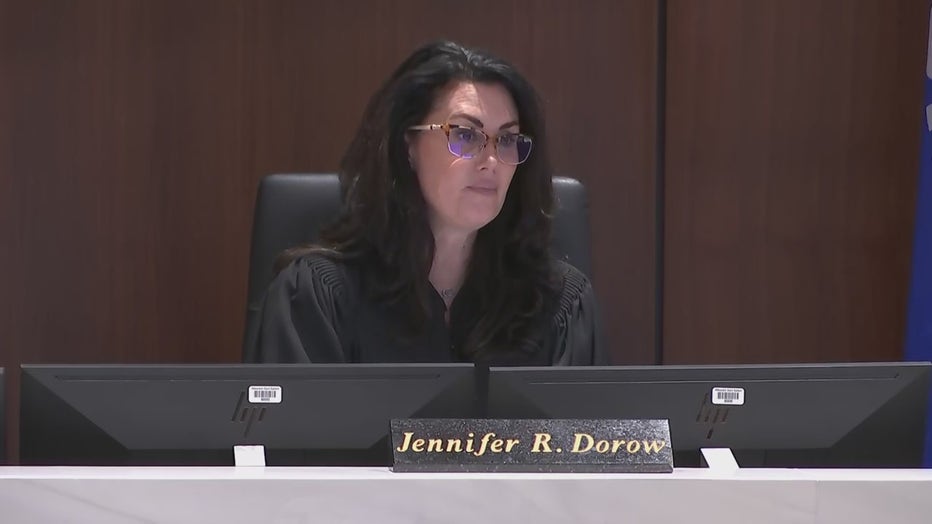 During sentencing, there is a chance for victims and their families to make impact statements. Brooks will also get an opportunity to address the court and the community.

Should Brooks appeal his convictions, all of that would have to happen after sentencing. According to Wisconsin law, Brooks has 20 days to file a notice of appeal after he is sentenced.