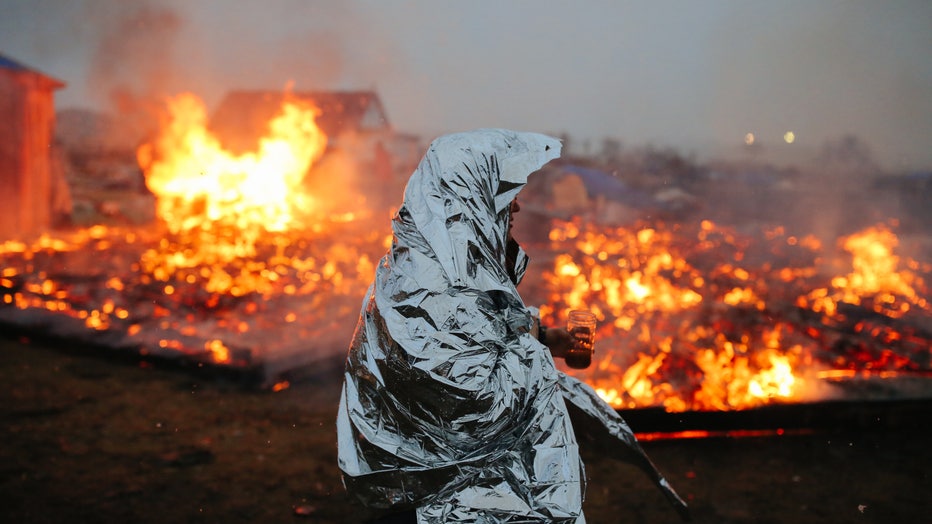 A fiery end to a 10-month protest

The last activists at the Dakota Access Pipeline protest camp torched their tents and the entrance to the site Wednesday in the final hours leading up to an Army-ordered evacuation deadline — one last act of defiance to end the 10-month-long protest at Standing Rock.

The final protesters occupying the North Dakota land of the Standing Rock Sioux tribe were forced to disperse Wednesday afternoon ahead of impending spring floods.

The group — which has demanded an end to the Dakota Access Pipeline, an under-construction North Dakota–to–Illinois oil line they say poses environmental threats — had more than 1,000 occupiers at the peak of the protests, but that number had been whittled down to between 200 and 300 by Wednesday.

The demonstrators set their teepees, tents, and other campsite structures on fire Wednesday morning, calling the blazes a “ceremonial act.” Most of them walked out of the camp at 1 p.m., an hour ahead of the deadline to leave.

At least one person was burned in the fire, police said, although the extent of the female victim’s injuries was not immediately clear.

The U.S. Army Corp of Engineers ordered the evacuation, saying the area would soon become flooded by melting winter snow. They also warned that the camp could pose an environmental threat if the floodwaters washed garbage and other debris into nearby rivers.

Hundreds of arrests and $2 million in destroyed equipment

Texas-based Energy Transfer Partners (ETP) first asked the government for permission to build the pipeline through North Dakota, South Dakota, Iowa, and Illinois in December 2014. While there was some immediate backlash, the first organized protests didn’t come until April 2016, after Iowa approved construction, becoming the last of the four states to approve the pipeline.

Over the past 10 months, hundreds of protesters have set up camp in North Dakota. Many were Native Americans who argued that the pipeline would dirty their tribes’ water and disrupt sacred lands.

In July, the Standing Rock Sioux tribe sued the U.S. Army Corps of Engineers, which greenlit pipe construction work on federal waterways, a move that prompted more demonstrators — Native Americans, environmentalists and other allies alike — to flock to the camp in support of the tribe. A second tribe, the Cheyenne River Sioux, signed on to the suit in August.

As more people converged on the campsite protest, the once-peaceful demonstrations turned violent. In August, protesters set fire to construction sitting along the Iowa stretch of the pipeline route, causing some $2 million in damages.

Over the 10-month course of the protests, more than 700 people were arrested, including Green Party presidential candidate Jill Steinand actress Shailene Woodley.

In December, the Standing Rock Sioux asked the protesters to evacuate the camp, insisting they’d continue to fight the pipeline in court instead of on the ground. Nevertheless, about 300 protesters stayed behind.

As the protesters disperse, the legal battle over the pipeline is ongoing.

After President Donald Trump signed a January executive order approving work on the final stretch of the pipeline, the Standing Rock Sioux and the Cheyenne tribes filed an emergency request to halt construction, maintaining that the pipe will damage their waters and land.

Since oil will not begin to flow through the still-under construction pipe until spring at the earliest, a judge denied the motion on Feb. 13, arguing that as long as there isn’t oil in the pipe, there’s no damage done. He promised to reevaluate his decision in another hearing set for Monday.

If the second hearing to block construction fails, the tribes’ hope their original lawsuit can still stop the pipeline from ferrying oil below their land. ETP CEO Kelcy Warren said the pipeline could be ready to use in three months, meaning that the tribes have that much time left to fight the pipeline in court to block the oil from flowing.

Alongside the construction, there will also be a massive cleanup effort to remove debris from the protest campsite.

The activists themselves began tidying up and removing debris from the area several weeks ago, and now Army officials will join in. The goal is to remove all trash and debris before the melted-snow floodwaters hit, potentially sending the litter into the rivers the campers fought to protect from the pipeline.