ALGIERS, Algeria — A hulking military transport plane crashed just after takeoff in Algeria Wednesday, killing 257 people in the worst aviation disaster in the North African nation's history and plunging the country into mourning.

Soldiers, their family members and a group of 30 people returning to refugee camps from hospital stays in Algeria's capital died in the morning crash of the Russian-made II-76 aircraft.

The plane went down in a field just outside a military base in Boufarik, 30 kilometers (20 miles) south of Algiers, and was devoured by flames, killing 247 passengers and 10 crew members, the Defense Ministry said.

There was no official mention of survivors, but one witness reported seeing people jump out of the aircraft before it crashed.

Arabic-language channel Dzair TV reported that five people were in a critical state, but it was unclear if they had been on the plane or were injured on the ground.

Several witnesses told Algerian TV network Ennahar they saw flames coming out of one of the planes' four engines just before it took off.

"The plane started to rise before falling," an unidentified man lying on what appeared to be a hospital bed told Ennahar TV. "The plane crashed on its wing first and caught fire." 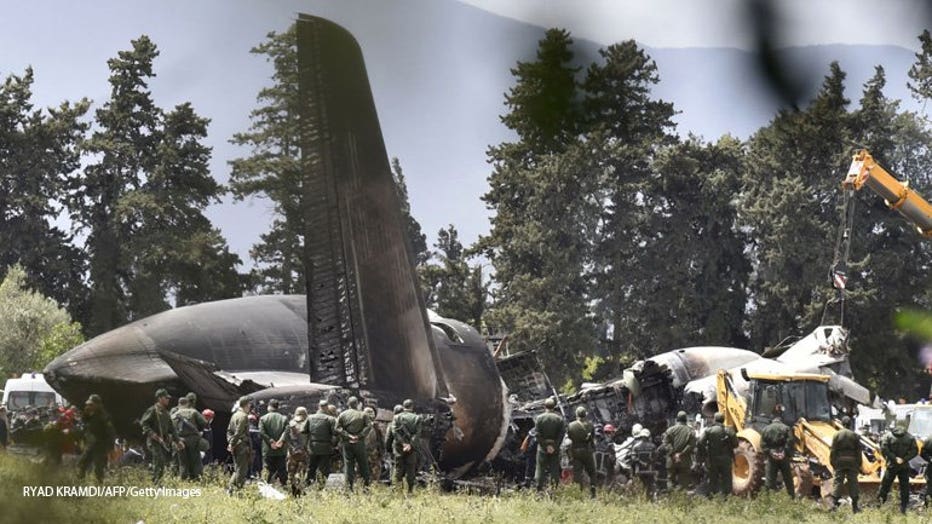 Rescuers are seen around the wreckage of an Algerian army plane which crashed near the Boufarik airbase from where the plane had taken off on April 11, 2018. The Algerian military plane crashed and caught fire killing 257 people, mostly army personne

Video on the state television channel ENTV showed a blackened hulk broken into pieces, with huge wheels scattered about along with other plane parts. Firefighters doused the flames while body bags were placed in rows in the field.

The victims' bodies were transported to the Algerian army's central hospital outside the capital.

President Abdelaziz Bouteflika ordered three days of mourning starting immediately and prayers for the dead on Friday at mosques across the country.

In the south, the Algerian-backed Polisario Front seeking independence for Western Sahara ordered a week of mourning for the 30 dead Sahrawi people returning to its refugee camps in Tindouf, a statement from the group said.

The flight was scheduled to go to Tindouf and then Bechar, the site of another military base, according to Farouk Achour, spokesman for Algeria's civil protection services. Tindouf is home to many refugees from the neighboring Western Sahara, a disputed territory annexed by Morocco.

Algeria is vast and plane flights are often the best way to traverse Africa's largest nation.

It was the first crash of an Algerian military plane since February 2014, when a U.S.-built C-130 Hercules turboprop slammed into a mountain in Algeria, killing at least 76 people and leaving just one survivor.

The four-engine Il-76 made its maiden voyage in 1997, according to Aviation Safety Network. The plane has been in production since the 1970s, and is widely used for both commercial freight and military transport.

The Algerian military, which historically depended on the Soviet Union and then Russia for military hardware, operates several of the planes.

Richard Aboulafia, an aviation analyst with Teal Group outside Washington, said it would be difficult to compare the accident rate of the II-76 to common Western airplanes because of the relatively smaller number produced and the fewer hours flown.

"It is a Russian design. That doesn't make it unsafe, but they tend to need more maintenance," he said.

The II-76 was designed to carry extremely heavy cargo, and it is unlikely that passengers alone — even a large number — would be a problem. Aboulafia said the number of troops that could be carried would be limited by space inside the aircraft more than weight considerations.

A retired Algerian officer, Mohamed Khelfaoui, told the online Algerian TSA site that he had flown in the aircraft several times and "it has proven itself in Algeria and elsewhere."

Wednesday's crash was not the deadliest of an Il-76. According to Aviation Safety Network, the 2003 crash of an IL-76 of the Iranian Revolutionary Guard killed 275 people.

The heavy loss of life of soldiers was certain to deeply shake Algeria. The National Liberation Army — which grew out of the fighting force which freed Algeria from French colonial rule — is revered by Algerians.

Today, the army is credited with saving the nation from an insurgency by Islamist extremists in the 1990s and early 2000s. The battle continues with sporadic attacks around Algeria and networks dismantled by soldiers.

The army's experience fighting terrorism has made it a valued ally of the United States and other western nations.

The U.S. Embassy in Algiers expressed its "deepest condolences" to "our partners and colleagues in the Algerian military," one of the numerous condolences that flooded into the capital from far and wide.

The previous deadliest crash on Algerian soil occurred in 2003, when 102 people were killed after a civilian airliner crashed at the end of the runway in Tamanrasset, in the south. Only one person survived.

Also in 2003, 10 people died when an Algerian Air Force C-130 crashed after an engine caught fire shortly after it took off from the air base near Boufarik, according to the Aviation Safety Network.