MILWAUKEE -- Protesters gathered for the seventh day in a row to march for justice in the case of George Floyd. On Thursday afternoon, June 4, protestors gathered at Cathedral Square to peacefully protest on the city's east side.

The march started around 4 p.m. near Kilbourn Avenue and Jackson Street as protesters worked their way east on Kilbourn and north on Prospect Avenue.

While hundreds gathered in the streets, protesters were also seen chanting out high rise windows along Prospect. One man even lowered a sign for marchers to use.

After briefly stopping at Prospect and North Avenue, the march continued west on North to Humboldt Avenue. The peaceful protest continued south on Humboldt to Brady Street then on to Water Street.

After a reconvene near City Hall, the march continued west on Wisconsin Avenue towards Marquette University where police blocked off on-ramps to I-43/94.

"It's a pretty surreal experience. It's amazing what's happening here. It's beautiful," said Marquette student Alyssa Lovergine. "Milwaukee coming together, the most segregated city in America, and you see all these people coming together for one cause -- it's awesome."

The group then crossed the 16th Street viaduct, headed down Canal Street to 6th Street into downtown. 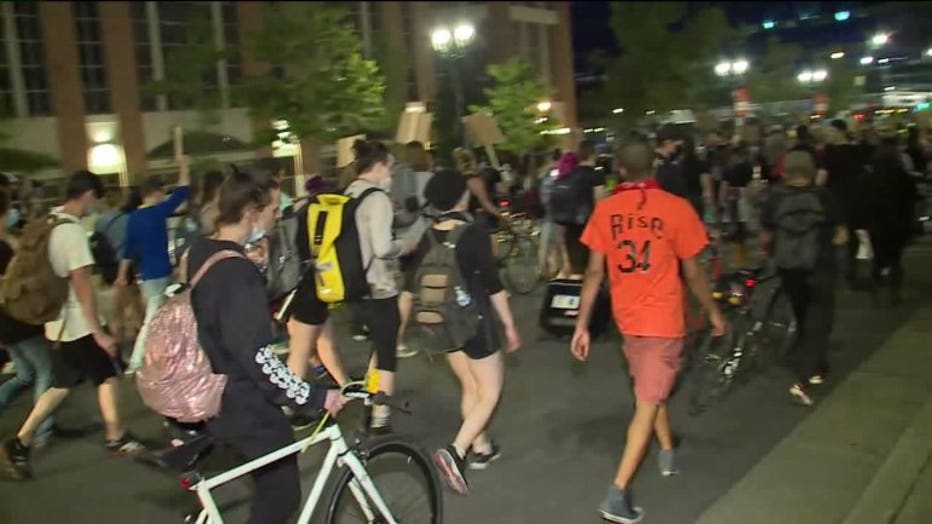