MILWAUKEE (WITI) -- A special meeting of Milwaukee's Fire and Police Commission meeting was held on Thursday evening, September 18th -- and the public had the opportunity to comment. The meeting was set up to as a listening session to discuss the potential use of body cameras by Milwaukee police officers -- but that wasn't the focus of the audience. A group was on hand -- again demanding answers in the April officer-involved shooting of 31-year-old Dontre Hamilton.

Hamilton was shot and killed by a Milwaukee police officer in April.

Police have said Hamilton took the officer's baton, and a struggle ensued.

Hamilton's family members are awaiting a charging decision by the District Attorney's Office. They and others have called for the officer's name to be made public, and for details on the injuries the officer is said to have suffered prior to the shooting.

The group didn't have the opportunity to present that list of demands to the Fire and Police Commission -- because they weren't allowed in the meeting.

The group filed into City Hall about 45 minutes after the meeting had begun, and as the meeting continued, police officers blocked doors -- denying the group's entry into the meeting.

That led demonstrators to pound on the walls -- their chants for justice growing louder.

The group says when Milwaukee Police Chief Ed Flynn left the meeting -- a comment was made regarding one of the demonstrators -- labeling him as an opportunist.

That comment prompted the group to host a press conference last week at City Hall -- during which they stood in solidarity with demonstrator Khalil Coleman, and announced that they "vehemently disagree" with Chief Flynn's assessment of Coleman's character.

The list of demands was presented to the Fire and Police Commission during the special meeting on Thursday, September 18th -- by the "Coalition for Justice." 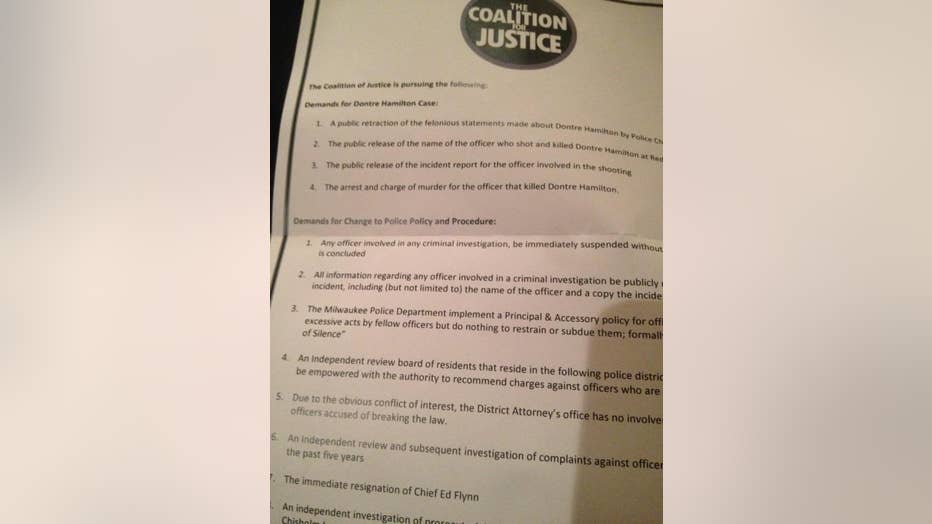 Topping that list of demands is a request that police release the name of the officer who shot and killed Dontre Hamilton. It's a name Nathaniel Hamilton shouted out during the Thursday evening's special meeting.

"I can say his name, since I know his name -- right Chief Flynn? The officer who shot my brother 14 times, murdered my brother in Red Arrow Park, killed him for no reason," Nathaniel Hamilton said.

Chief Flynn has not confirmed the name of the officer. He says that officer remains on administrative duty.

Chief Flynn says he's given the family all the answers he can right now.

"A lot of answers have been given so far. I can't speak to what the final answers will be, but the state investigation is in the hands of the decision-making official," Chief Flynn said.

The Milwaukee County District Attorney's Office is that decision-making official. That office will determine whether charges will be filed against the officer who shot Hamilton.

The special meeting of the Fire and Police Commission ended the way it began -- with a demand for justice, and a promise to continue to protest until this group believes justice has been served.

The group has asked for a private meeting with the Fire and Police Commission -- something the FPC will vote on at its next meeting.

The "body cameras" issue was set to be presented to the Fire and Police Commission by community activist Tracey Dent on September 4th -- the same evening the group had planned to submit its list of demands in the Hamilton case.

Due to the chaos inside City Hall that night as demonstrators filled the building, a petition with more than 2,200 signatures was never delivered to the Fire and Police Commission.

Community activist Tracey Dent said that petition would be presented during the Fire and Police Commission's meeting this Thursday, September 18th.

Milwaukee Police Chief Ed Flynn says these body cameras are something the department has been looking into for some time. He says while there are a lot of positives that could come from officers wearing body cameras, there are also a lot of complex repercussions.

"I don't think the public wants to be on tape 24/7 during private critical moments vulnerable to public records requests every time you interact with an officer. Certainly, I think the analogy of having a body camera on a police officer is a little bit like trying to do instant replay in the NFL with a body camera on an offensive tackle. It's going to capture some very important information, but it's also still not going to get a big picture -- so it's certainly a form of accountability and has its uses, but I don't want people to think this is a cure-all to community trust issues," Chief Flynn said.

Milwaukee Mayor Tom Barrett says he will set aside $100,000 in his next proposed budget for a pilot program for body cameras for police officers.

CLICK HERE for complete coverage on the Dontre Hamilton case via FOX6Now.com.