What to know about Pfizer and Merck's COVID treatment pills

U.S. health regulators have authorized two pills against COVID-19 that Americans can take at home, developed by Pfizer and Merck.

ROME (AP) - Christians around the world celebrated their second COVID-19 Christmas as surging infections in many countries overwhelmed hospitals, canceled flights and curbed religious observances Saturday, a point in the pandemic when coronavirus vaccines were more available than ever.

In the U.S., at least three major airlines reported canceling dozens of flights as illnesses largely tied to the omicron variant took a toll on flight crew numbers.

FlightAware, a flight-tracking website, noted 941 flights entering, leaving or inside the U.S. canceled Saturday, up from 690 Friday. About 200 more flights were already canceled for Sunday. FlightAware does not say why flights are canceled.

Delta, United and JetBlue on Friday had all said the omicron variant was causing staffing problems leading to flight cancellations. United spokesperson Maddie King said staffing shortages were still causing cancellations and it was unclear when normal operations would return. "This was unexpected," she said of omicron's impact on staffing. Delta and JetBlue did not immediately respond to questions from the Associated Press Saturday.

FlightAware, which does not give a reason for why flights are canceled, said airlines scrapped nearly 6,000 flights globally on Friday, Saturday and Sunday as of Saturday afternoon, with almost one-third of affected flights to, from or within the United States.

RELATED: COVID-19 surge: Here’s what’s canceled or closing across the US

The flight cancellations are the latest to sweep the country as cases continue to rise, fueled by the omicron variant.

Many churches canceled planned in-person Christmas services, and for those that did have in-person worship, clergy reported smaller but significant attendance.

"During this season of joy, we are inspired by the countless Americans who are a reminder that the things we hold sacred unite us and transcend distance, time, and even the constraints of a pandemic: faith, family, and friendship; a love of the arts, learning, and nature; gratitude, service, and community; unity and peace. These are the gifts from the heart," President Joe Biden said in a statement Saturday. 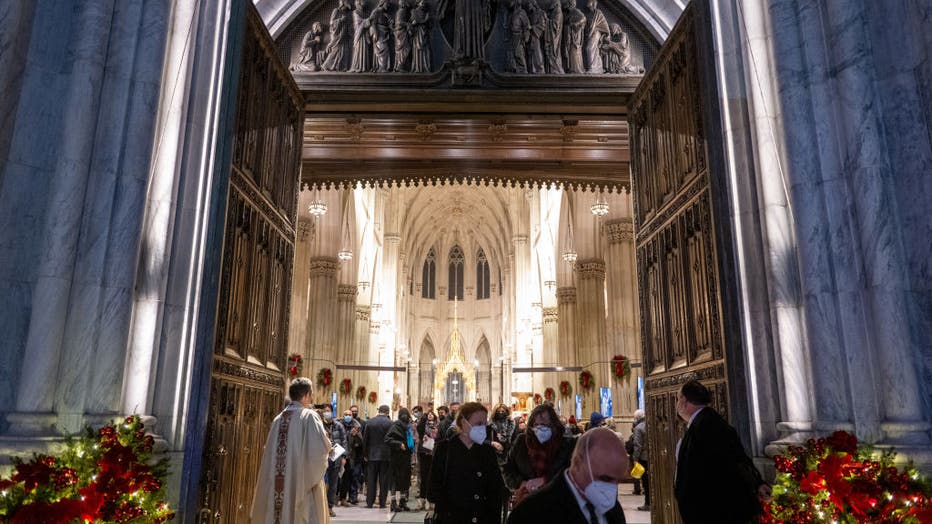 Omicron has raced ahead of other variants and is now the dominant version of the coronavirus in the U.S., accounting for 73% of new infections last week, federal health officials said Monday.

In much of the country, it’s even higher. Omicron is responsible for an estimated 90% or more of new infections in the New York area, the Southeast, the industrial Midwest and the Pacific Northwest. The national rate suggests that more than 650,000 omicron infections occurred in the U.S. last week.

COVID-19 testing continued unimpeded in some places, while other sites closed for the day.

Swelling numbers of cases in Florida made tests almost as popular as Christmas ham. Florida hit a new case record for the second day in a row.

Cases are rising around the globe, too. European and Australian airlines had also canceled holiday-season flights due to staffing problems tied to COVID.

Chinese airlines made up many of the canceled flights, and Chinese airports topped FlightAware's lists of those with most cancellations. China has strict pandemic control measures including frequent lockdowns, and the government set one on Xi'an, a city of 13 million people, earlier this week.

In Britain, Queen Elizabeth II noted another year of pain — particularly personal after losing her husband, Prince Philip, in April — and urged people everywhere to celebrate with friends and family, despite the grief caused by the pandemic.

"Although it’s a time of great happiness and good cheer for many, Christmas can be hard for those who have lost loved ones,’’ the queen said in the prerecorded message broadcast when many British families were enjoying their traditional Christmas dinner. "This year, especially, I understand why.’’

Thousands of people across England got a vaccine booster shot for Christmas as new cases in Britain hit another daily record of 122,186. The Good Health Pharmacy in north London was one of dozens of vaccination sites that kept their doors open Saturday to administer "jingle jabs" amid a government push to offer booster shots to all adults by the end of the year.

Pope Francis used his Christmas address to pray for some of those vaccines to reach the poorest countries. While wealthy countries have inoculated as much as 90% of their adult populations, 8.9% of Africa’s people are fully jabbed, making it the world’s least-vaccinated continent.

Only a few thousand well-wishers turned out for his noontime address and blessing, but even that was better than last year, when Italy’s Christmas lockdown forced Francis indoors for the annual "Urbi et Orbi" ("To the city and the world") speech.

While some countries in Asia imposed restrictions to try to contain the highly contagious omicron variant, governments in Europe and elsewhere preached common sense despite reporting record daily cases this week, advising their citizens to use masks and voluntarily limit the size of holiday gatherings.

In South Korea, social distancing rules required churches to limit worshippers to 70% of seating capacity, and service attendees had to be fully vaccinated.

South Korea has been grappling with soaring infections and deaths since it significantly eased its virus curbs in early November as part of efforts to return to pre-pandemic normalcy. The country was eventually forced to restore its toughest distancing guidelines, including a four-person limit on social gatherings and a 9 p.m. curfew for restaurants and cafes.

Australia also had a Christmas with a surge of COVID-19 cases, its worst of the pandemic, which forced states to reinstate mask mandates and other measures.

Christmas celebrations were subdued in much of India, with more decorations than crowds: Authorities reintroduced nighttime curfews and restrictions on gatherings of more than five people in big cities like New Delhi and Mumbai. People attended midnight Mass in Mumbai and elsewhere, but in smaller numbers.

As the pandemic spread around the world the past two years, New Zealand used its isolation to its advantage. Border controls kept the worst of the virus at bay. By this Christmas, New Zealand had recorded 50 deaths in a population of 5.5 million.

New Zealanders enjoyed the holiday in the warmth of mid-summer with few restrictions. Their country has one of the world’s most vaccinated populations, with 95% of adults having had at least one dose. The country also is one of the few largely untouched by omicron.

But that success has come at a cost. There were empty chairs at some family tables this holiday season because some New Zealanders living and working overseas were not able to return home due to isolation and quarantine requirements.

RELATED: US will lift travel ban on southern African countries on Dec. 31

On Fiji, many in the deeply religious nation will celebrate Christmas at traditional church services and family gatherings. The Pacific island has an ongoing outbreak and a pandemic death toll of almost 700, but 92% of the adult population is fully vaccinated.

In remote Macuata province, residents of four villages received a special Christmas gift: Electricity was connected to their villages for the first time.