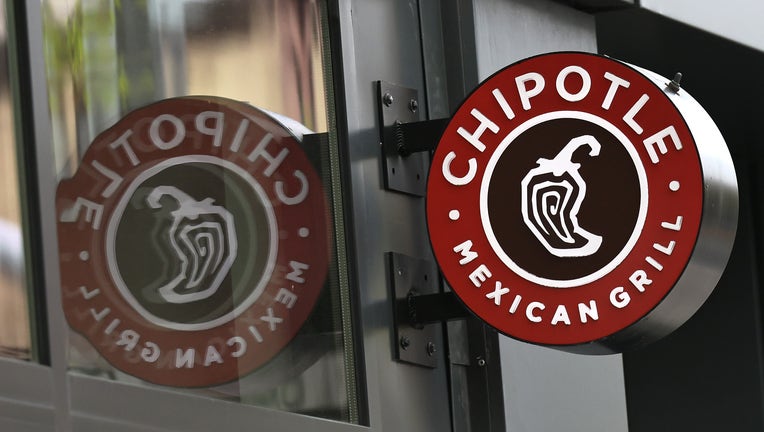 A Chipotle Mexican Grill sign is seen in the Park Slope neighborhood on April 29, 2021 in the Brooklyn borough of New York City. (Photo by Michael M. Santiago/Getty Images)

NEWPORT BEACH, Calif. - Chipotle Mexican Grill announced it will increase the average restaurant wage to $15 per hour by the end of June, with starting wages ranging from $11 to $18 an hour.

The company said employees could also advance to high-paying, six-figure salaried positions in as little as three and a half years.

"We hope to attract even more talent by showcasing the potential income that can be achieved in a few short years," Chief Diversity, Inclusion and People Officer Marissa Andrada said in a news release Monday.

Along with the increase in compensation, the company is also highlighting additional benefits such as more bonuses, tuition assistance, mental health care resources as well as retirement savings plans.

RELATED: Maryland to start cracking down on unemployment for those who've been offered their jobs back

The announcement comes as the company looks to hire 20,000 employees for 200 restaurants set to open in 2021.

According to FOX Business, McDonald's announced in April it was hiring 8,000 employees in Tennessee alone, and a separate franchise in South Florida said it would hand out $50 to anyone who simply showed up to an interview with the chain. Taco Bell also looked to hire 5,000 people after hosting "hiring parties" nationwide in April.

The hospitality industry is currently coping with a labor shortage, making it difficult for companies to hire workers as states ease their pandemic-induced restrictions.

According to a recent report from the U.S. Bureau of Labor Statistics, employment in the leisure and hospitality industry rose by 331,000 in April as restrictions were eased, with 187,000 of those hires in food and drink services. However, the bureau reported that even though the leisure and hospitality industry added 5.4 million jobs over the past year, employment is still down 2.8 million jobs, or 16.8%, since February 2020.

According to the New York Times, some workers haven’t returned because they’re able to make more money from unemployment. Others have also left to pursue more lucrative careers, according to the outlet. Some have also expressed concern as many Americans remain unvaccinated from the coronavirus.

However, the restaurant industry still hopes to rebound after the COVID-19 pandemic forced many restaurants to close or serve take-out food in 2020.