MILWAUKEE COUNTY -- 23-year-old Gregory Rollins of Milwaukee has been criminally charged in connection with an officer-involved shooting that occurred near 20th and Center last Tuesday, August 4th. 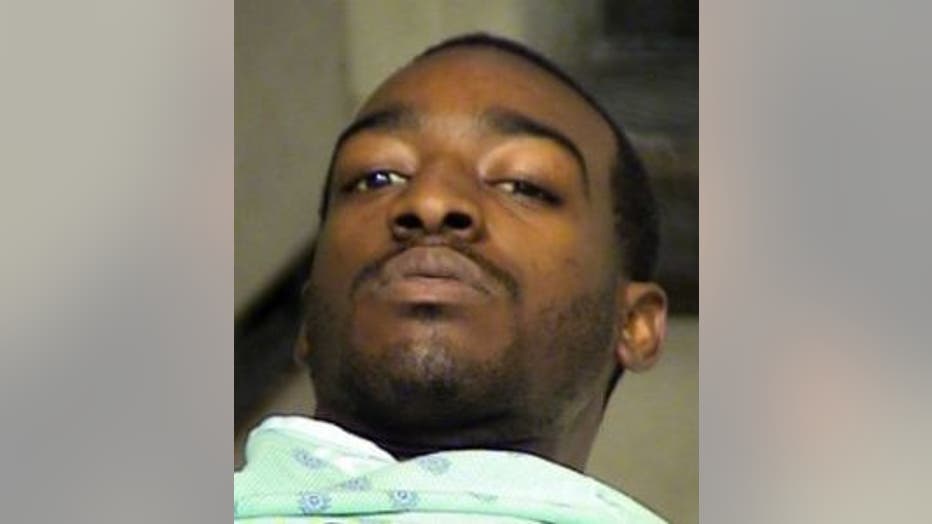 The complaint indicates officers spoke with a man who indicated he was in the backyard with his cousin and two friends, one of whom was Gregory Rollins, on the afternoon of August 4th.

They were working on a vehicle.

The man said he had just handed his friend a screwdriver when a police squad car that was headed southbound in the alley stopped -- and an officer asked: "Where's the guns?"

The man said he and his friends responded by saying they had no guns, and he said they raised their hands and lifted their shirts to expose their waistbands.

When one of the officers asked Rollins to "come here," the man said Rollins "just stood there." When an officer started to get out of the squad car, the man says Rollins took off running -- and two officers then began to chase him.

Shortly thereafter, the man said he heard "a bunch of gunshots," according to the complaint. 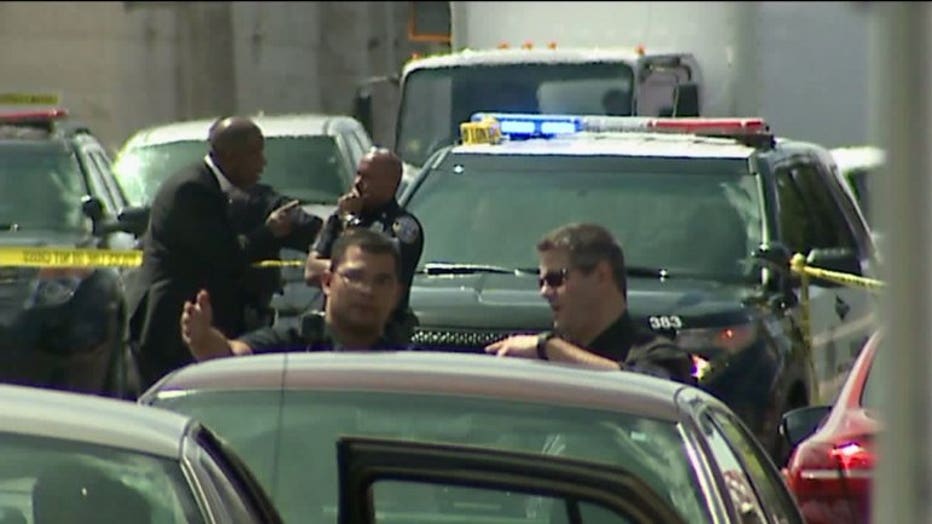 The complaint indicates there were three police officers and an assistant district attorney inside the unmarked squad car that pulled up near the men who were working on a vehicle.

The officer who was driving that unmarked squad told investigators he is familiar with the area from W. Lloyd to W. Wright, and N. 14th to N. 17th in Milwaukee because this area consists of heavy illegal cocaine and heroin sales.

Investigators spoke with a witness, who said she was approaching the intersection of 20th and W. Center on Tuesday afternoon, and had to wait for the lights to change. At that point, she observed a "detective car," and told investigators it seemed as though they were looking for someone. 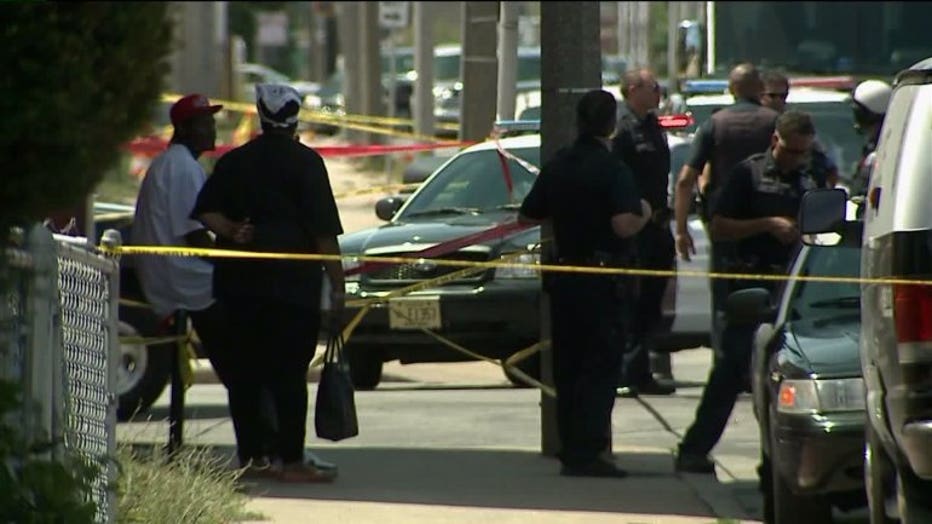 The witness said she did not see the man in the blue pants fire any shots -- and she did not hear any other gunshots.

She said the man wearing the blue pants fell to the ground, and she then saw he had a black gun in his hand, with an extended clip.

This witness said she then saw three or four police officers appear -- and they were yelling at the man to "put down the gun." The woman said she saw the gun lying near the man.

Investigators spoke with another of the officers who was in that unmarked detective car prior to the shooting. That officer indicated he had exited the squad and engaged in a foot pursuit through yards on N. 18th Street to the area near N. 20th and W. Center. 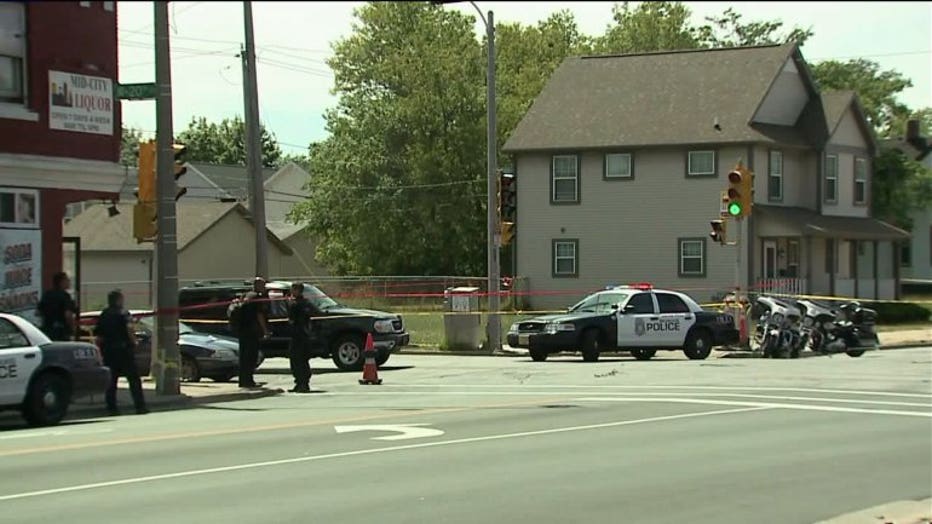 There, the officer said when he got to the sidewalk, he saw Gregory Rollins fire one shot directly at the unmarked squad.

The complaint says the assistant district attorney said Rollins was standing back from the group, not making eye contact with the officers. One of the officers in the car then said "That guy's got a gun," and told another officer to exit the squad.

At that point, Rollins took off on foot -- and two of the officers exited the squad and began chasing him.

Another of the officers drove the squad and began broadcasting the pursuit.

The assistant district attorney was in the front passenger seat of the squad.

The assistant district attorney told investigators he observed the suspect (Rollins) had a black gun in his hand which appeared to have an extended magazine.

The officer who was driving the squad exited and ordered Rollins to drop the gun.

The complaint indicates that as Rollins was running, he would turn towards the squad and point the gun at the squad -- to the point where the assistant district attorney covered his head with his hands and ducked down because he felt he was going to be shot at.

The assistant district attorney then said he heard "several shots." He looked up and saw Rollins lying on the ground -- and more officers arriving on scene.

The complaint says the officer who was driving the unmarked squad is the officer who fired shots in this case. He indicated he was standing outside the squad, near the driver's side door, when the shots were fired, and that he believed he fired three times in a northwest direction.

Surveillance video reviewed by investigators from a nearby liquor store showed Rollins running towards N. 20th Street, and across the street immediately behind the squad car, holding what appeared to be a gun. The video also showed a bullet striking the ground near the driver's side of the squad. 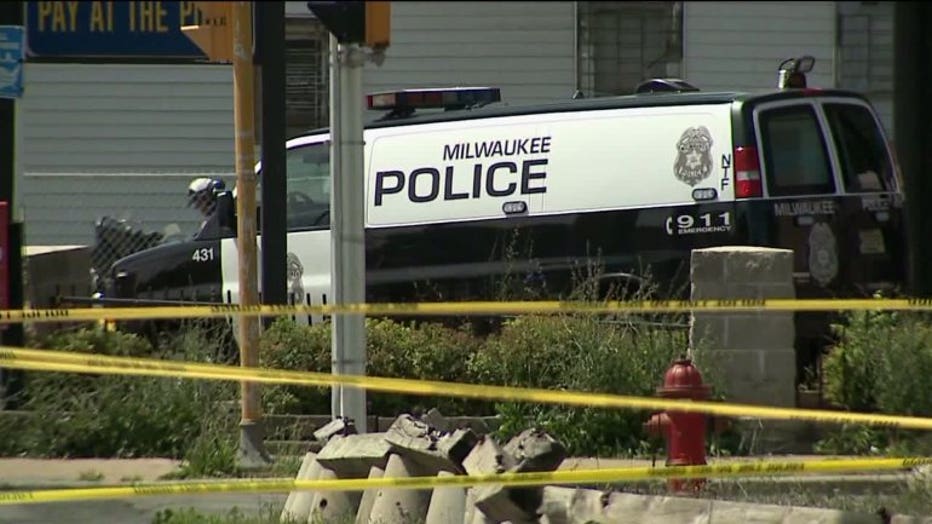 A .380 casing and deformed bullet were recovered from the street near the squad car. Additionally, the complaint indicates the squad car had a bullet strike on the rear of the driver's side door immediately behind the front driver's door.

The weapon allegedly fired by Rollins was recovered -- a .380 caliber semi-automatic pistol with 11 unfired cartridges in the magazine and no unfired cartridge in the chamber -- consistent with the gun having jammed during the incident.

Five .40 caliber casings were recovered from the east side of N. 20th Street -- fired by the officer in this case.

The complaint indicates Rollins is a convicted felon -- having been convicted of felony escape in 2012, burglary in 2011, and possession with intent to deliver THC in 2011.

Rollins had open cases in Waukesha County at the time of this alleged crime for four counts of knowingly violating a domestic abuse injunction and misdemeanor bail jumping -- filed in separate cases.