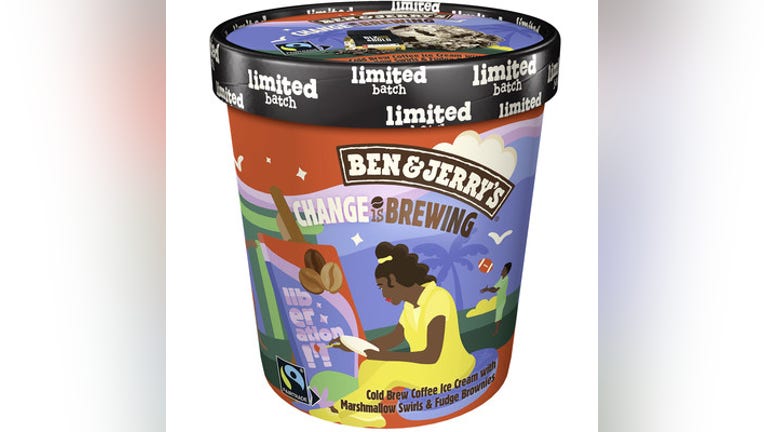 Jerry's new pint of Change is Brewing depicts a future where everyone feels safe and all communities, including Black and Brown communities, can thrive. (Photo: Ben & Jerry’s)

According to the company’s website, the limited-edition "Change is Brewing" flavor will celebrate "safety & liberation for all." The company said it wanted to divest from "a racist criminal legal system" and invest in policies and organizations that support Black communities.

The ice cream flavor is a combination of cold brew coffee with marshmallow swirls & fudge brownies. It features BLK & Bold coffee, a Black-owned organization aimed at helping children in need.

The flavor was launched in support of Rep. Cori Bush’s (D-Mo) People’s Response Act, which would create a public safety agency within the U.S. Department of Health.

The mural's artist added the quote after reading it in a magazine article.

Bush said during a launch event that the proposed bill, co-sponsored by 20 other congressional members, would create "a unit of federal first responders – unarmed health experts that are culturally competent – to answer the call for the mental health and substance-use emergencies that happen."

The bill also calls for providing $7.5 billion in grant funding to state and local governments, and community-based organizations to fully fund public safety and improve crisis response as well as launching a federal first responders unit that will support states and local governments with emergency health crises.

In a press release Monday, Ben & Jerry’s encouraged fans to sign a pledge supporting the bill.

The company and Bush believe the proposed bill, if passed, will save lives, especially in police confrontations. A 2019 study showed over the life course, about 1 in every 1,000 black men can expect to be killed by police— a significantly higher rate than White men.

Black Lives Matter became a mainstream slogan in the aftermath of the 2020 murder of George Floyd, who was Black, by the now-imprisoned former White Minneapolis police officer Derek Chauvin. Chauvin is now serving 22 1/2 years in prison.

The movement’s agenda focuses heavily on overhauling police training, the use of force and the punishment of rogue officers. It’s also pressing to erase economic inequality and disparities in education and health care.

"By sending in unarmed experts to deal with health crises—and even more importantly, by providing the resources communities need to offer preventive care—the PRA will improve public safety and help prevent police violence," Ben and Jerry’s said in a statement.

FOX Business and the Associated Press contributed to this report. This story was reported from Los Angeles