June is Pride Month, a time dedicated to honoring the 1969 Stonewall riots, uplifting those in the LGBTQ community and working to achieve equal justice and opportunities.

In June of 1969, patrons and supporters of a popular gay bar in New York City, called the Stonewall Inn, staged an uprising during a routine police raid, according to the NYC LGBT Historic Sites Project. The days-long conflict marked the beginning of a modern movement to outlaw discriminatory laws and practices against LGBTQ Americans.

The purpose of the commemorative month is to also recognize the impact LGBTQ individuals have had on history, according to youth.gov, a federal website dedicated to strengthening U.S. youth programs. 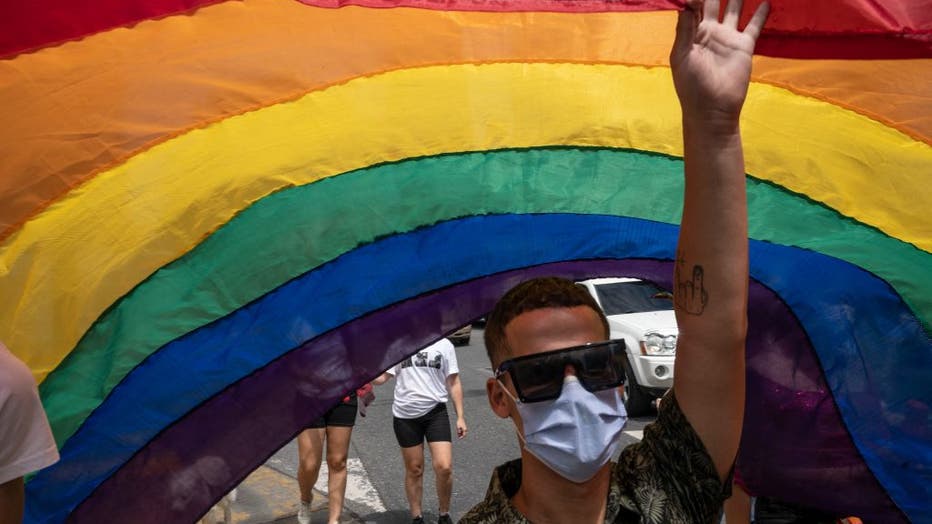 Members of the LGBTQ community carry posters and flags with the colors of the rainbow during a protest march called "I walk against discrimination," demanding respect of their rights in the framework of the gay pride month celebration in Caracas, Ven

To celebrate Pride Month throughout the month of June, you can watch dozens of LGBTQ movies and television shows that are free to stream on Tubi.

Some include award-winning titles like "Carol" starring Cate Blanchett and Rooney Mara. Other iconic hits free to watch include "Rent" with Idina Menzel, Rosario Dawson and Taye Diggs, and "But I’m a Cheerleader" starring Natasha Lyonne.

Here are some of the films and shows you can catch on Tubi:

After Sex (2007) - "Meet eight couples straight and gay; virgins and strangers; lovers, liars, cheaters and swingers as they deal with making physical intimacy an emotional ride."

Appropriate Behaviour (2015) - "Shirin is struggling to become an ideal Persian daughter, politically correct bisexual and hip young Brooklynite but fails miserably in her attempt at all identities. Being without a cliche to hold onto can be a lonely experience."

Arianna (2017) - "In the summer heat of the Tuscan countryside, a late-blooming 19-year-old faces the true nature of her body, past and sexual identity."

Baby Steps (2017) - "From Oscar-winning producer of The Wedding Banquet and Crouching Tiger, Hidden Dragon, comes this comedy which takes an honest look at gay family issues in complicated dynamo of a cross-cultural and generational Taiwanese-American family."

Bit (2020) - "On her summer break in Los Angeles, a transgender teen girl falls in with a gang of queer feminist vampires rooting out the city’s toxic masculinity."

But I’m a Cheerleader (1999) - "A naive cheerleader is sent to a gay conversion camp when her strait-laced parents and friends suspect her of being a lesbian in this quirky comedy."

Carol (2015) - "Set in the 1950s, this is the tale of forbidden love between modest Therese and elegant Carol, which develops as they travel together."

De-Lovely (2004) - "As the toast of Broadway, Cole Porter, reflects upon his life, a stage musical in the making helps capture his meteoric career and relationships."

Double Lover (2017) - "Chloé, a young woman living in Paris, begins a series of therapy sessions with Paul Meyer in hopes of overcoming a bout of depression. Following her treatment, both realize they have fallen in love and embark on a new chapter together. Yet Chloé soon comes to believe that Paul is keeping a secret. Spiraling emotional and sexual stakes push Chloé to extremes as she works to solve the puzzle."

God’s Own Country (2017) - "A frustrated young farmer spends his spare time getting drunk and having casual hookups, until he meets a Romanian migrant worker who really sees him."

Farewell, My Queen (2012) - "FAREWELL, MY QUEEN marks the return of acclaimed director Benoît Jacquot (A Single Girl, Seventh Heaven, Sade, Deep in the Woods,) and brilliantly captures the passions, debauchery, occasional glimpses of nobility and ultimately the chaos that engulfed the court of Marie Antoinette in the final days before the full-scale outbreak of the Revolution."

Heartstone (2016) - "In summer at a fishing village, two boys come of age, as one tries to win a girl’s heart, and the other develops unexpected feelings for him."

How to Win at Checkers (Every Time) (2015) - "As Thailand’s military draft lottery fast-approaches, Oat attempts to convince his older brother to change his fate before it’s too late."

Jeffrey (1995) - "This romantic comedy centers on the chaotic love life of Jeffrey, a gay man who swears off sex only to fall in love with his ideal man."

I Am Love (2010) - "A Russian woman marries a rich Italian industrialist and becomes a respected member of his family, until a talented young chef fires up her appetites."

I Love You Phillip Morris (2009) - "Jim Carrey stars in the true story of a local businessman who turns to white-collar crime, comes out as gay, and meets the love of his life in jail."

Laurence Anyways (2012) - "In the 90s, Laurence tells his girlfriend Fred that he wants to become a woman. In spite of the odds, in spite of each other, they confront the prejudices of their friends, ignore the council of their families and brave the phobias of the society they offend."

Maurice (1987) - "Set against the stifling conformity of pre-World War I English society, E.M. Forster's Maurice is a story of coming to terms with one's sexuality and identity in the face of disapproval and misunderstanding."

Our Body (2018) - "An aspiring civil servant overwhelmed by her life falls for a female writer and amateur runner whose depression leads to a tragic and shocking act."

Rent (2005) - "The film version of the Broadway smash rock opera about a chosen family of New York City starving artists dealing with poverty, AIDS, and addiction."

The New Girlfriend (2015) - "After the death of her best friend, Claire falls into a deep depression, but a surprising discovery about her friend's husband gives her a new taste for life."

They (2018) - "A suburban 14-year-old goes by the pronoun ‘They’ and takes hormone blockers to postpone puberty, until now, as they decide to transition or not."

Temblores (2019) - "A father faces a faith-shaking crisis in modern-day Guatemala, as he is torn between his religion, his family and his love for another man."

XXY (2007) - "When an intersex teenager comes of age, she asks difficult questions about her gender identity and makes a decision that will impact her future."

Pride: The Series (2013) - "Four individuals connected by blood, friendship, sex, and love are dragged into the classic battle between good versus evil."

Queer as Folk (2000) - "Following the relationships of three young, gay men in London — promiscuous Stuart, Vince who pines for Stuart and 15 year-old Nathan."

Queer Icon (2019) - "Queer Icon" is a show that celebrates the trajectory and success of members of the LGBTQ+ community. Exploring their life stories from the background, upbringing to coming out, career, and activism.

RELATED: From beaches to camp, these free movies will get you into a summer mood