WINDSOR, Calif. - A Sonoma County family has a message of gratitude and caution for the holiday season.

"Emotionally it's really something because a few months back I didn't know if I'd see another Thanksgiving," said Carlos Basurto, 51, a survivor of the coronavirus and a retired Windsor police chief.

On Thursday, Basurto and son Carlos, 29, tossed a football after dinner in front of the family home in Windsor.

Just a few months ago, that would have been unthinkable.

Basurto left the hospital unable to climb his home's stairs without assistance, his legs were so weak.

When he got sick, Basurto was newly retired and admits he wasn't overly concerned about the emerging threat.

"I wish this virus on no one," he says, recalling his 21-day stint in the hospital, much of it in intensive care.

Like many families, Basurto and wife, Carmen, and their two adult children eschewed a large Thanksgiving gathering with relatives this year.

It was just the four of them sitting down to dinner, as it has been during the past eight months of Basurto's health crisis.

"It was probably one of the best Thanksgiving's I've ever had," he said, "because every day with them is a thanksgiving."

Added Carmen, "It's the most special Thanksgiving since we married, I'm just blessed to have my husband here with me."

Their ordeal began on a New Orleans vacation in March.

Many extended family members went along, and a few others developed symptoms too, but none were as sick as Basurto.

At the end of the trip, he was feverish, coughing, and having trouble breathing.

Basurto suffers from asthma, so at his wife's urging, he went almost straight to emergency when they got home.

Not long after being admitted, he was put in a coma and spent a week on a ventilator.

"The last time I thought I was going to talk to my dad was over Facetime," said son Carlos, who helped his father regain his strength with exercise but remembers how terrified he was he might lose him in the beginning.

"It made it real for everyone especially at that time when no one really knew what was going on, and what it it was, it was still brand new," said the younger man. 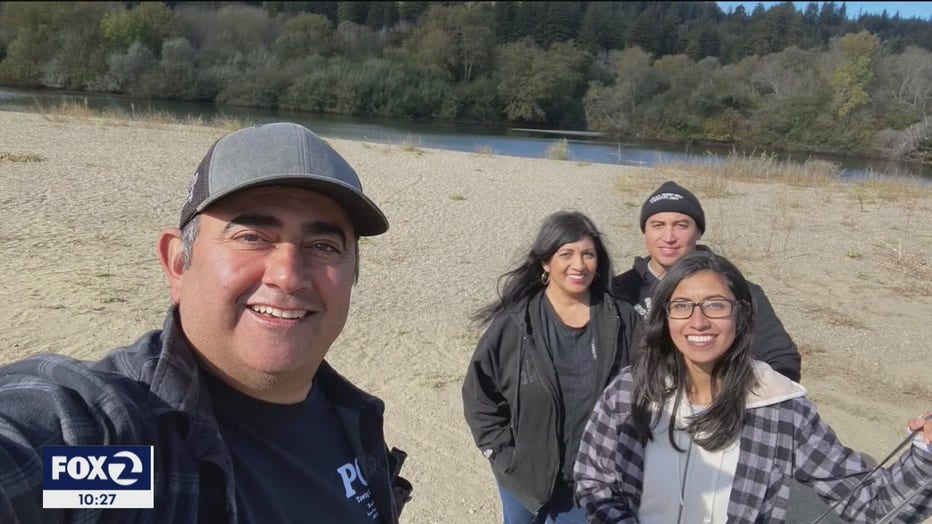 Carlos Basurta and his family on Thanksgiving.

Getting discharged from the hospital was a huge victory.

But Basurto had lost 24 pounds and needed to regain his strength and mobility, using a walker in the beginning because of leg pain.

By summer he was back on his bicycle, a turning point.

On Thanksgiving, he took a 17-mile ride.

His loved ones notice subtle changes in him since his life-threatening illness.

"I feel like we're a lot closer and he still has a sense of humor," said daughter Crissy, 25. "Other than that, he's a lot more cautious now, that's for sure."

For Carmen, it has been therapeutic to visit Santa Rosa's Sutter Hospital, and thank all of the caregivers personally.

"It was healing,it was closure, we were very grateful to see everyone who worked on him," said Carmen.

"They were voices to her but angels to me, " said Basurto, who says they pray daily for frontline medical workers. "They're putting their life on the line for everybody out here, who doesn't take it serious and winds up in there- with them."

Watching tv after dinner, the family is aware that not everyone stayed home to minimize transmission, even with infections numbers rising.

"When I hear people say things like 'it's fake or it's a hoax,'  that's what gets me upset," said Basurto.

He and his wife ask doubters, "who do you love the most and can you risk losing them and being the one responsible?"

Raising wine glasses on Thanksgiving with his family, Basurto urges people to minimize risk appreciate loved ones in their lives.

"Every day I wake up now, I open my eyes and I'm grateful."

Debora Villalon is a reporter for KTVU.  Email Debora at debora.villalon@foxtv.com and follow her on Twitter@DeboraKTVU