IMPERIAL BEACH, Calif. — The mayor of this beach, which abuts Tijuana, Mexico at a point that is visible by a border wall marking the two countries, is fed up with sewage and toxic chemicals flowing into the United States, and he is heading to Washington, D.C., to ask the Trump administration to do something about it.

Imperial Beach Mayor Serge Dedina left for the nation’s capital on Sunday with a congressional delegation. He told Border Report that he has meetings at the White House scheduled on Tuesday with top officials who he hopes will help this situation. 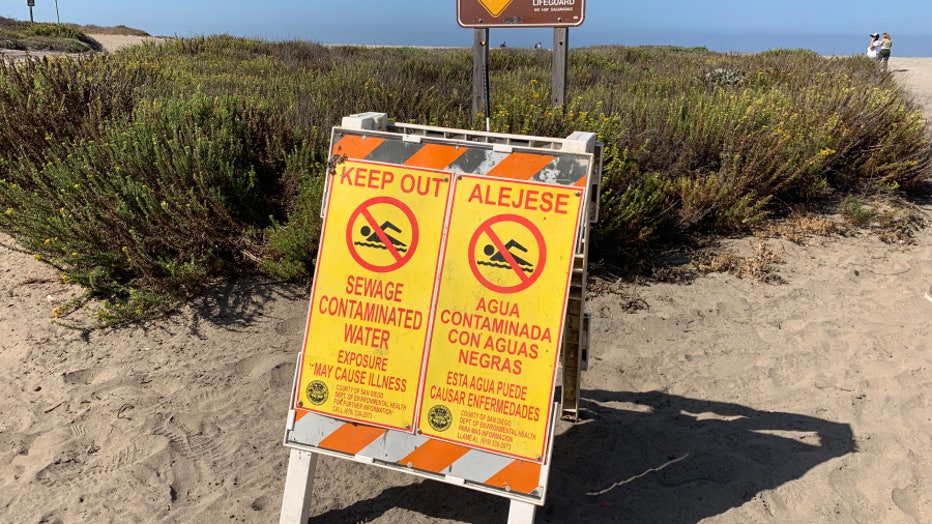 A sign at Imperial Beach forbids swimming on Saturday, Sept. 21, 2019, because of sewage contamination, which officials say come from Tijuana, Mexico. The beaches here are closed about 300 days per year because of pollution. (Border Report Photo/Sand

Aguirre said that a sewage treatment plant located five miles south of the border in Tijuana is discharging millions of gallons of untreated sewage daily. When currents flow in a south to northward direction, these pollutants cross into the surf zone on the U.S. side. She said that 19 pump stations in Tijuana also “are deficient and constantly get clogged with trash and debris.”

Aguirre said there is a U.S. pump station at the border that is pumping daily 1,100 liters per second to “prevent that river water from coming across the border” to the U.S. side. “That pump station is the only thing that stands between us and cross-border flow.”

Dick Pilgrim, 81, a board member with the Friends of San Diego Wildlife Refuges was on hand for the beach cleanup on Saturday. He said the sewage and pollution problem “is complicated” and has been going on “for half a century.” 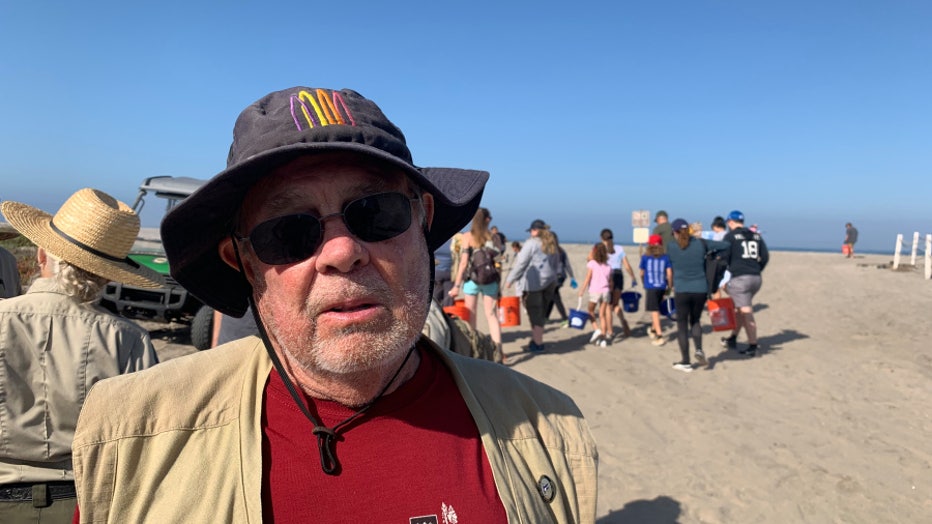 81-year-old Dick Pilgrim serves on the board of the Friends of San Diego Wildlife Refuges and volunteers at the Tijuana National Estuarine Research Reserve. He volunteered in Saturday’s beach cleanup at Imperial Beach, California. (Border Report Phot


“But basically Tijuana’s sewage treatment has not been able to keep up with their treatment growth. It’s designed for a city of 100,000 and you are using it in a city of over 1 million.”

The population of Tijuana in 2019 was almost 1.7 million, according to World Population Review, which calls it “one of the fastest-growing” cities in Mexico.

Pilgrim, who volunteers at the Tijuana National Estuarine Research Reserve, says when there are heavy rains in southern California it inundates the already over-burdened Tijuana sewage system and clogs it with additional sand and debris and that causes runoff.

And because Tijuana sits on a bluff, higher than Imperial Beach, the runoff flows downhill to the Tijuana River Estuary, which Aguirre says is a stop in the Pacific flyway for over 300 species of birds, including the endangered Western Snowy Plover.

“Pumps get clogs and you get overflows,” Pilgrim said. “That water and sewage has to go somewhere so it flows out into the streets into Tijuana, it’s not a nice situation and ultimately because they are higher than it is over here it has to flow downhill and it ends up in the Tijuana River Estuary and channel.

Rip currents aren’t the only thing that is dangerous at Imperial Beach, California. Toxic pollutants and untreated sewage flows from Mexico into this beach, which borders Tijuana. (Border Report Photo/Sandra Sanchez).

Jena Lyn and her son, Logan, of Chula Vista, California, were among the volunteers helping to pick up trash on Saturday. Logan needed to log volunteer hours for school but she said it was also a “good opportunity to help clean up the beaches.”

“It’s sad that it gets that way,” Lyn said. “We never swim at this beach. We usually further north because usually you hear that you can’t go in the water here.”

“It’s horrible,” said 11-year-old Diego Cervantes, who was volunteering with his sister, Nadia, 7, and their teacher at the beach clean up. “It’s really bad because it’s killing a lot of animals. It’s not a good thing because they deserve to live their life and they’re innocent. The ocean is what keeps them alive, and us.”

Sandra Sanchez can be reached at SSanchez@BorderReport.com. She is reporting while on Nexstar’s Border Tour of the Southwest, a 10-day trek from San Diego to Brownsville, Texas.