ORANGE COUNTY, Calif. -- Two California Democrats in Orange County who called for the John Wayne Airport to be renamed are speaking out after the late American icon’s son, Ethan Wayne, came to his defense on Monday.

Fred Smoller and Dr. Michael Moodian are two of the three politicians in Orange County, Calif., whose names are listed on the resolution that calls for John Wayne’s name and likenesses to be removed from the airport over his past “racist and bigoted statements” decades ago. In a statement to Fox News, they now call out the actor's son for proclaiming that John Wayne was not a racist. 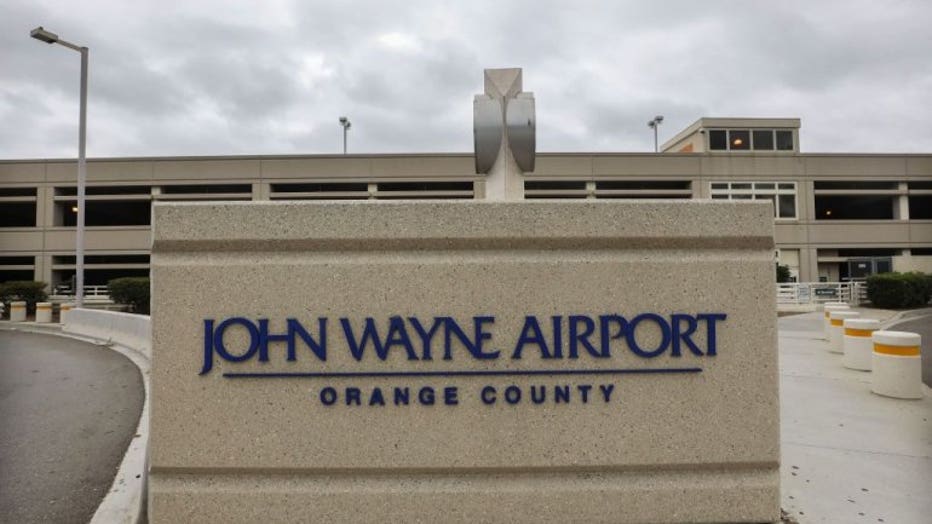 A sign is displayed at John Wayne Airport, located in Orange County, on June 28, 2020 in Santa Ana, California. Orange County Democrats are calling for the name of the airport to be changed due to the deceased actor's history of 'racist and bigoted s

“It is commendable – though not surprising – that Ethan Wayne would come to the defense of his famous father. However, there is nothing in the historical record to support Ethan’s assertion that ‘if John Wayne were here today, he would be in the forefront demanding fairness and justice for all people,’ and that, ‘He would have pulled those officers off of George Floyd, because that was the right thing to do. He would stand for everyone’s right to protest and work toward change.’”

Smoller and Moodian authored the op-ed that kicked off the campaign to rename the John Wayne Airport. They denounced the statement Ethan Wayne gave to Fox News on Monday, in which he said that the late actor’s 1971 interview with Playboy did not convey his “true feelings.” 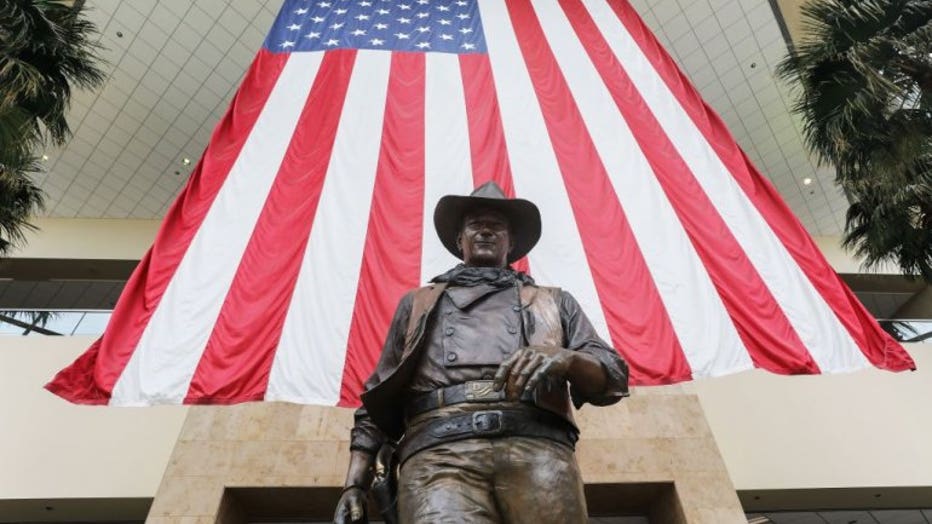 A statue of John Wayne is on display beneath an American flag in John Wayne Airport, located in Orange County, on June 28, 2020 in Santa Ana, California. Orange County Democrats are calling for the name of the airport to be changed and the statue to

In the interview at the time, John Wayne is quoted saying, “I believe in white supremacy until the blacks are educated to a point of responsibility. I don’t believe in giving authority and positions of leadership and judgment to irresponsible people.” He also said he felt no remorse for the subjugation of Native Americans and called movies such as “Easy Rider” and “Midnight Cowboy” perverted.

“When John Wayne had the privilege of a public forum and megaphone, he clearly expressed his belief that others were inferior and undeserving of an equal place in society. He was dismissive of historical atrocities. He ridiculed advocacy for fairness and equality,” the two continued in their joint statement to Fox News.

The pair of California Democrats argued that Wayne “had no kind words for the societal movements of the 1960s in which blacks, women, LGBTQ+ community members, and Native Americans fought for ‘fairness and justice for all people.’”

They also claimed that if John Wayne were alive today, he likely would not have decried George Floyd’s death.

“He lived in a time he could have chosen to do or simply say the ‘right’ thing. He didn’t. His words and oppressive views were just as wrong then as they are today. If he were with us today, we believe it is far more likely that he would have come to the defense of Donald Trump rather than George Floyd.”

Smoller and Moodian’s comments come after Ethan Wayne stepped up to bat for his late father. In a statement to Fox News on Monday, Ethan said: "Let me make one thing clear -- John Wayne was not a racist. I know that term is casually tossed around these days, but I take it very seriously. I also understand how we got to this point.

"There is no question that the words spoken by John Wayne in an interview 50 years ago have caused pain and anger," Ethan continued, referencing the late actor’s 1971 Playboy interview. "They pained him as well, as he realized his true feelings were wrongly conveyed."

Ethan, who is Wayne's youngest son and president of John Wayne Enterprises, went on to say in his statement on Monday: "The truth is, as we have seen in papers from his archives, he did not support 'white supremacy' in any way and believed that responsible people should gain power without the use of violence.

"Those who knew him, knew he judged everyone as an individual and believed everyone deserved an equal opportunity," Ethan added. "He called out bigotry when he saw it. He hired and worked with people of all races, creeds, and sexual orientations. John Wayne stood for the very best for all of us -- a society that doesn’t discriminate against anyone seeking the American dream."

Ethan said that it "would be an injustice to judge him based on a single interview, as opposed to the full picture of who he was."

"The current focus on social justice is absolutely valid and necessary. But attempts by some to use it for political advantage distract from real opportunities for reform," he said.

The 58-year-old also explained what his father would have done if he was still alive today.

"One thing we know – if John Wayne were here today, he would be in the forefront demanding fairness and justice for all people," Ethan said. "He would have pulled those officers off of George Floyd, because that was the right thing to do. He would stand for everyone’s right to protest and work toward change."

"Since his death more than 40 years ago, his legacy continues through the John Wayne Cancer Foundation, which has helped provide courage, strength and grit to the fight against cancer, and through his extensive film library. My father believed that we can learn from yesterday, but not by erasing the past. His name, no matter where it is, will always embody these values, and our family knows the positive impact that he made on the world will never be diminished," Ethan concluded his statement.

The push to oust Wayne, who was a longtime county resident, from the airport's name has a lengthy history. The airport, which is in the heart of Orange County, dates back decades and county officials voted to change the name to remember Wayne when he died.

Deanne Thompson, an airport spokeswoman, has previously said the county has no plans to change the name or remove a statue of Wayne from the airport, though the issue comes up periodically, including last year.

However, the current push comes as thousands of Americans have taken to the streets to protest police brutality against black people and systemic racism in the wake of George Floyd's death.

In many places, communities have moved to take down statues of former slaveholders -- or topple them -- and remove the Confederate emblem from imagery including Mississippi's state flag, as well as rename buildings and institutions that are named after people deemed to have held racist views or committed racist acts.

Fox News' Adam Shaw, Mariah Haas and Stephanie Nolasco, as well as The Associated Press, contributed to this report.