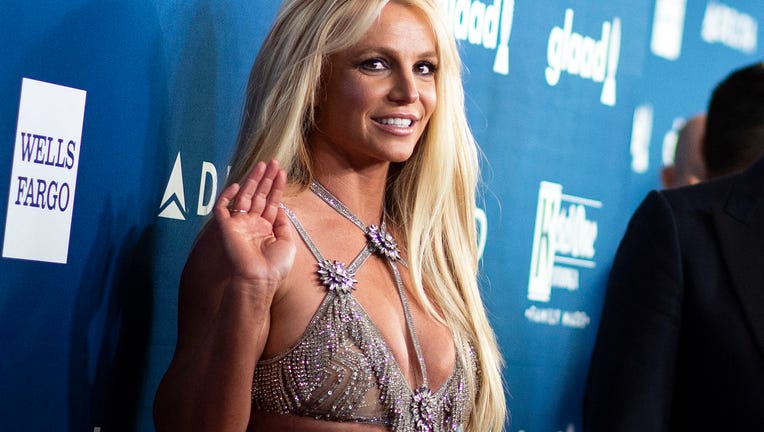 Britney Spears fired back at ex-husband Kevin Federline Saturday night over an interview he did, claiming their two sons are choosing not to see her.

"One word: Hurtful," the pop star wrote in her Instagram story.

"It saddens me to hear that my ex-husband has decided to discuss the relationship between me and my children," she said in a statement. "As we all know, raising teenage boys is never easy for anyone. It concerns me the reason is based on my Instagram. It was LONG before Instagram."

Earlier, Federline, Spears’ second husband, told the Daily Mail, "The boys have decided they are not seeing her right now. It's been a few months since they've seen her. They made the decision not to go to her wedding" to Sam Asghari in June. Although Federline insisted Sean Preston, 16, and Jayden James, 15, still love her. 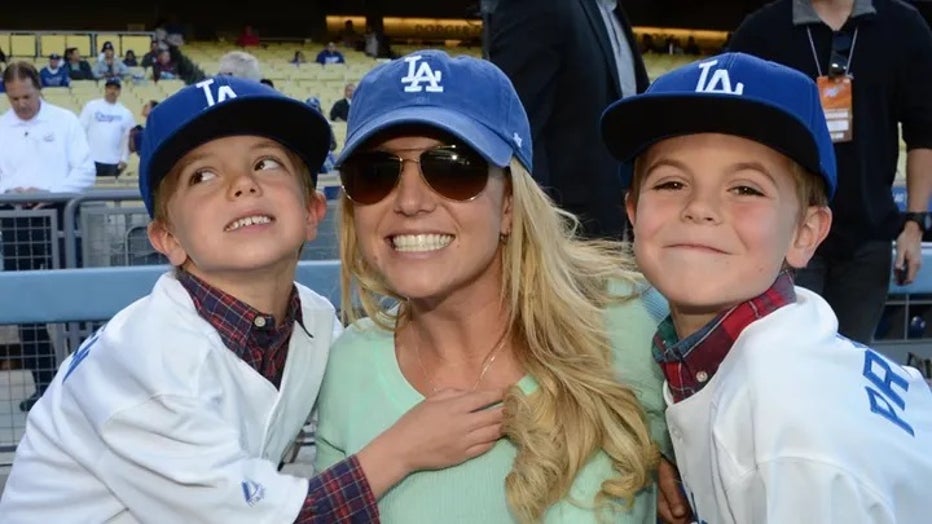 In this handout photo provided by the LA Dodgers, Britney Spears poses with sons Jayden James Federline, left, and Sean Preston Federline, right, during a game against the San Diego Padres at Dodger Stadium on April 17, 2013 in Los Angeles, Californi

"I gave them everything," Spears continued. "I'll say it... My mother told me ‘you should GIVE them to their dad’ ... I'm sharing this because I can … Have a good day folks!!!"

Federline said her conservatorship battle has been "hard to watch, harder to live through, harder to watch my boys go through than anything else. It's been tough. It's the most challenging thing I've ever had to do in my life." 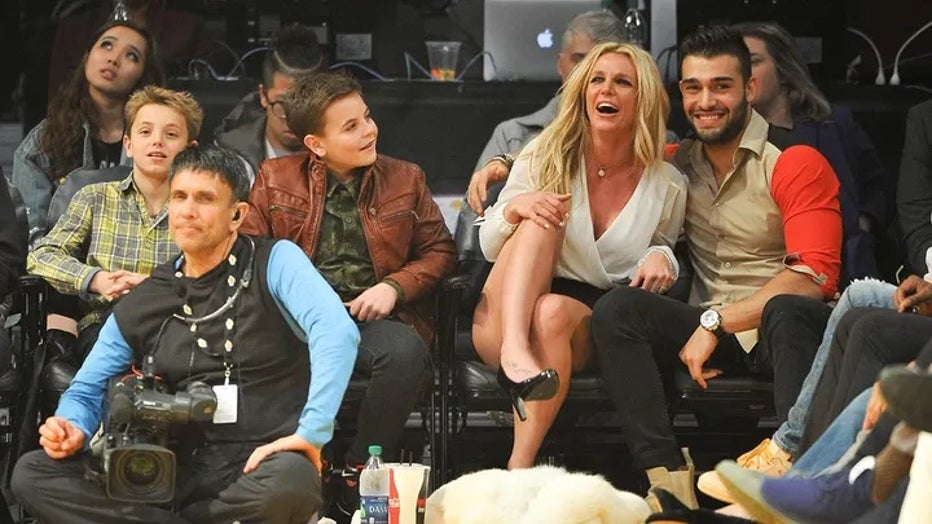 Although Federline took out a restraining order against Spears’ father Jamie Spears in 2019 over an alleged physical altercation with one of his sons, he said there is no longer any animosity between them and he’s welcome in Federline’s home.

"I would absolutely welcome Jamie Spears back in the boys' lives," he said. "Especially if that's what the boys wanted. I don't have any hard feelings towards Jamie Spears. People make mistakes. I feel bad for him. I feel like he's been put through the wringer."

Federline, who was married to Spears from 2004-2006, also said he’s struggled to explain Spears’ risqué Instagram photos to the teenagers. 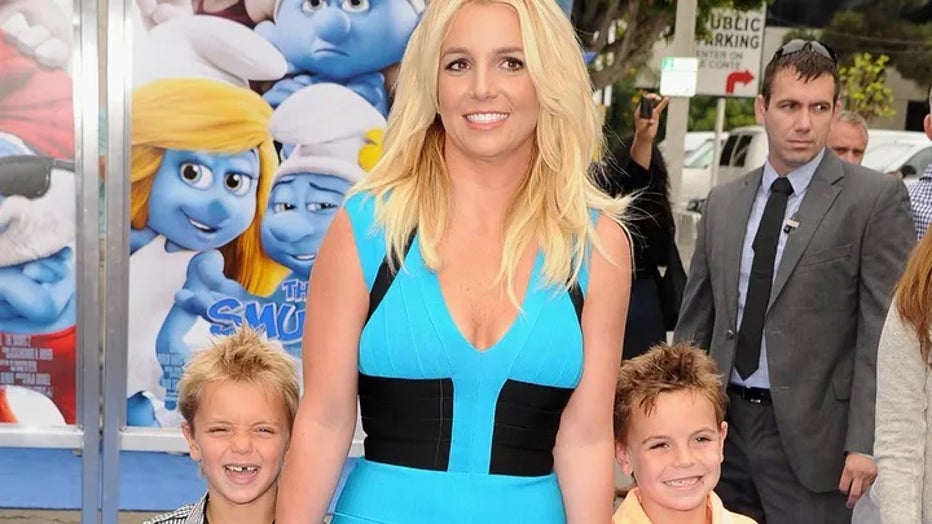 "’Look, maybe that's just another way she tries to express herself,’" he has said to their sons, he told the Daily Mail. "But that doesn't take away from the fact of what it does to them. It's tough. I can't imagine how it feels to be a teenager having to go to high school."

Asghari also defended his wife earlier Saturday, writing on his Instagram story, "To clarify my wife has never posted a nude selfie except of her butt wich is quite modest these days. All other posts were implied nudity wich can be seen in any ad for lotion or soap."

He also chastised Federline for making the statement about the "Baby One More Time" singer's relationship with her kids, saying it has no "validity."

"It is irresponsible to make that statement publicly," he wrote. "The boys are very smart and will be 18 soon to make their own decisions and may eventually realize the ‘tough’ part was having a father who hasn't worked much in over 15 years as a role model." 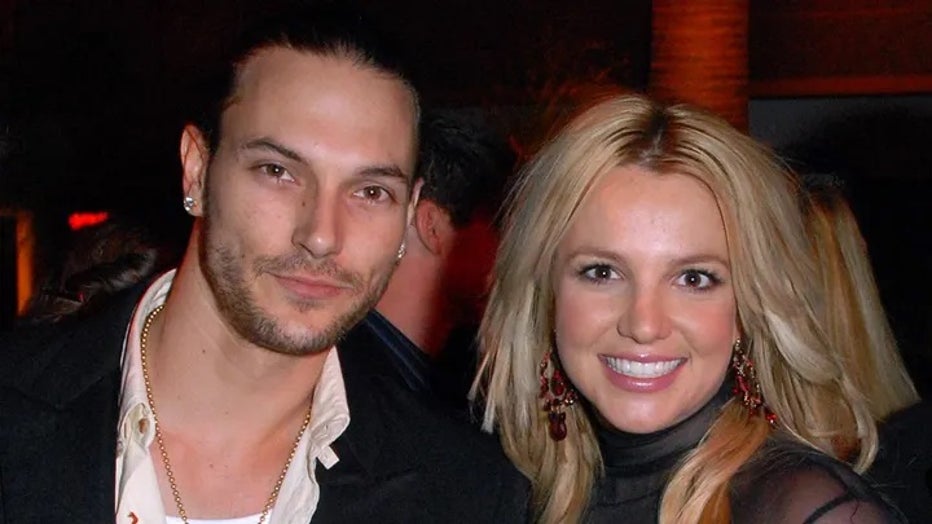 Asghari claimed that Federline’s "gravy train" would end soon enough, saying that "probably explains the timing of these hurtful statements."

He said he doesn’t know Federline personally and doesn’t have anything against him besides him choosing to "vilify my wife. His character is revealed by approval of the cruel 13 year CShip and his loyalty to Jaimie indicates his approval at time of its conception as well."

He added that the "normal issues" Spears had gone through in 2007, which would now be "easily dealt with [in] therapy or other ways were magnified to justify a 13 year prison sentence. Anyone approving of it is wrong of benefiting from it somehow."

He concluded that he wouldn’t comment on how Federline might have benefited from the conservatorship "except to say I have a job."

Federline, for his part, told the Daily Mail he wants her to see the stress she's put her sons under. "If there was a way – any way – I could possibly say something to just open [Britney's] eyes – but I haven't found that yet. I feel like, if I found that, I'd be on the phone trying to tell her."