BOSTON — Confetti cannons boomed and huge crowds of fans accustomed to the success of their beloved sports franchises cheered wildly as duck boats ferried the Boston Red Sox on a parade through the city marking the team's fourth World Series championship in the past 15 years.

The parade that began Wednesday at venerable Fenway Park wound its way through several major downtown streets lined by fans numbering in the hundreds of thousands, some who arrived before dawn to stake out the best vantage point and many clad in Red Sox jerseys, sweatshirts and caps. 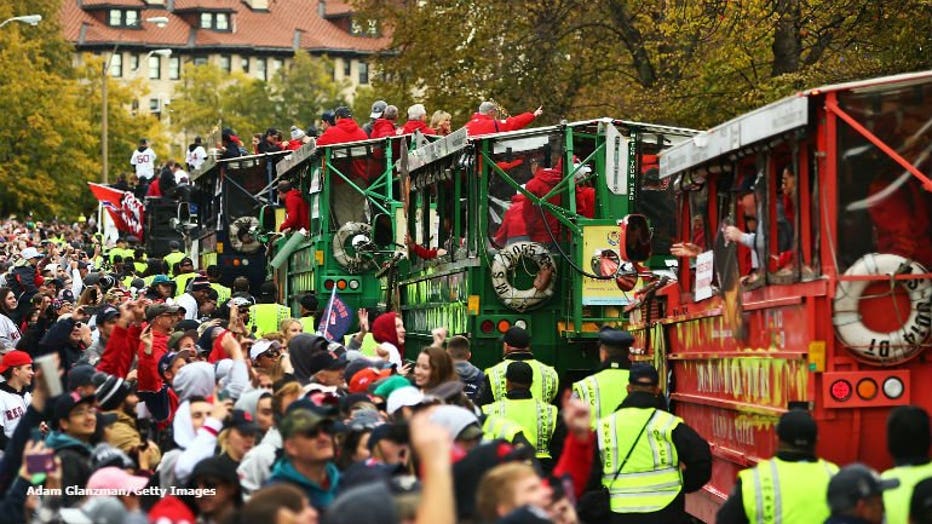 Bits of red, white and blue paper rained down on the crowd on the crisp autumn day as they waited for a glimpse of the ballplayers passing in the city's emblematic amphibious duck boats. The players and members of their families waved down in response from the open-roofed vehicles, and some players autographed balls and tossed them into the jubilant throng.

No arrests or major incidents were reported, but one of the four World Series trophies on display was slightly damaged when struck by a full can of beer tossed at one of the boats.

Jarrick Fidalgo, of New Bedford, Massachusetts, was one of many taking advantage of the fact that the parade coincided with Halloween. Wearing a Red Sox jersey and ski hat, he was at his first championship parade with his face painted up like the Joker from "Batman." 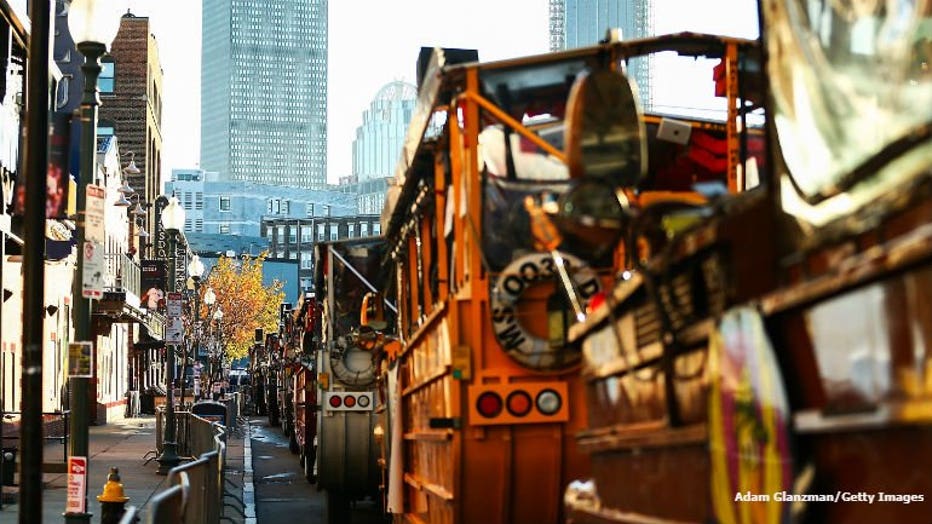 "It's been nothing but love," he said. "We're out here having a good time. We're turning it up, but of course everybody's got to stay safe."

Security was tight along the route, which took the team past the site of the deadly 2013 Boston Marathon bombings. No public drinking was allowed. Uniformed police officers lined the route, and plainclothes officers mingled with the crowds.

Boston police tweeted their thanks "to everybody behaving like a champion" during the parade.

During a pre-parade ceremony at Fenway, Red Sox manager Alex Cora thanked fans for supporting the team during what he called a "historic season" in which the Sox won a team-record 108 games during the regular season before beating the New York Yankees, Houston Astros and Los Angeles Dodgers in the playoffs. 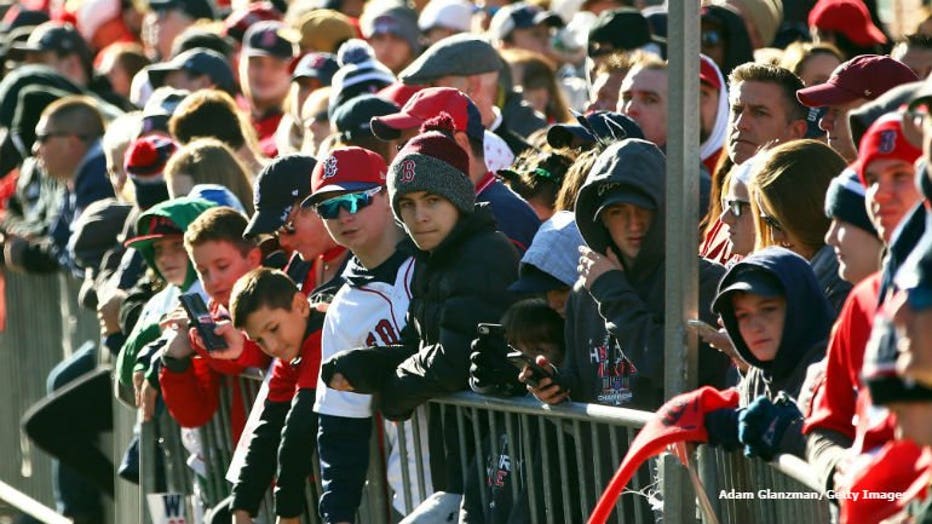 "I've been saying since Day One, this is crazy, this is madness," said Cora, adding that his players shared the same high expectations of Boston fans.

"And that's why they are world champs," he said.

Noting the often fickle nature of fans, Cora joked that some might have been ready to have him fired when the team was down 4-0 in the 7th inning of Game 4 of the World Series, with the Dodgers seemingly on the verge of evening the series at that point. But the Red Sox rallied to win that game and wrapped up the title the following night.

Max Colognesi, 16, was one of countless Boston-area students who skipped class to take in the parade. 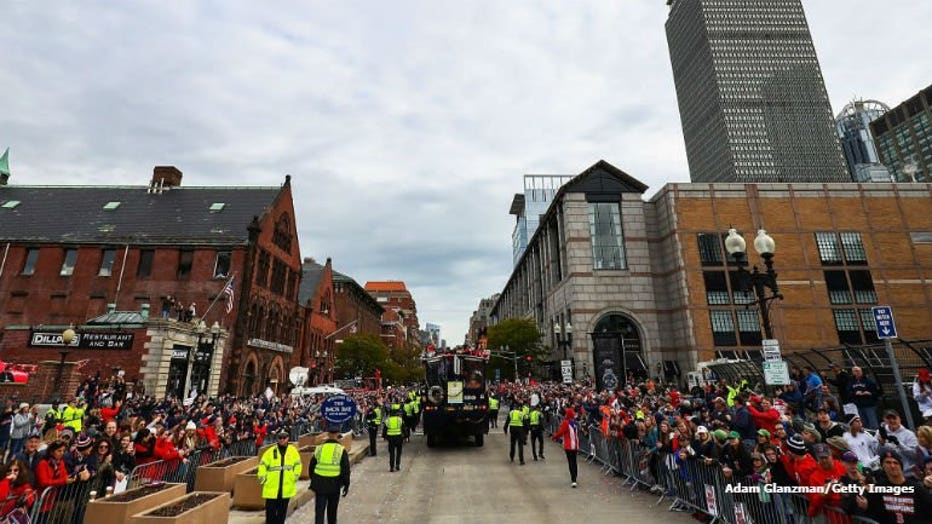 "Everyone is here. It's awesome," said the youth, who was wearing a jersey of Red Sox star Mookie Betts as he stood near the ballpark. "I have a lot of work to get back to when I get home, but it's worth it."

Anti-Yankees chants could also be heard along the parade route, a nod to the long-running rivalry between the American League squads.

Boston fans learned even more good news Wednesday when pitcher David Price announced just before the start of the parade that he planned to stay with the team, declining a contract option that would have enabled him to become a free agent.

On Tuesday, the Red Sox announced they were exercising their $15 million option for next season to retain another star pitcher, Chris Sale.

Though some fans were enjoying their first championship parade, others, like 23-year-old Derek Safford, were veterans. The Berklee College of Music student said he and his family had attended every parade since 2004, including celebrations of titles for the New England Patriots, Boston Celtics and Boston Bruins.

As the duck boats rolled past, Safford held up a sign depicting the grim reaper knocking on three doors bearing the logos of the teams the Red Sox vanquished in the playoffs.

I know people had doubts at the start of the season with Cora being a first time manager, but he really made a family like atmosphere and brought this team together," he said.

The crowd was so thick along the route that some fans struggled to catch a glimpse of the parade.

Stacey Simpson, a New Hampshire resident decked out as the cat in the hat from The Dr. Seuss children's books, was among dozens of people who clambered atop utility trucks but still had a tough time seeing.

"I saw the confetti and stuff. I knew they were there," Simpson said, shrugging.