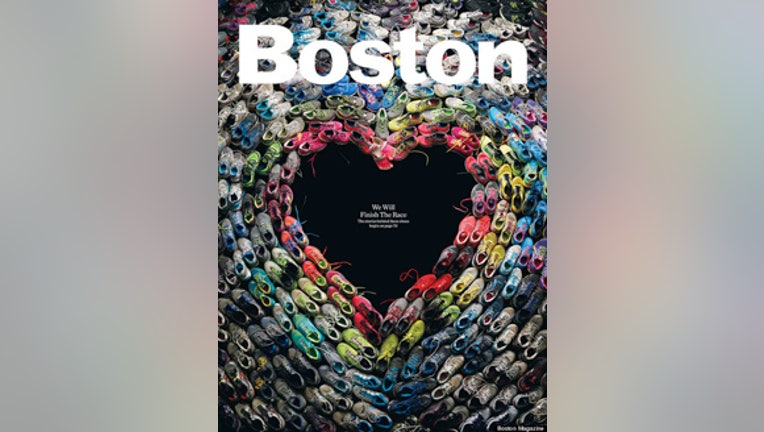 That's the simple but resilient statement framed by dozens of running shoes forming the shape of a heart on the cover of Boston Magazine's May cover.

Design director Brian Struble and deputy design director Liz Noftle came up with the idea on April 15, the night after the Boston Marathon bombing shook the city -- and nation -- just a few blocks away from the magazine's offices near Copley Square.

The staff decided to scrap the magazine's previously planned May cover, and with the new concept in hand utilized social media and personal connections to ask runners who took part in the marathon for their shoes.

With each pair of shoes came a story, which the staff packaged into a feature called "The Shoes We Wore." Only 15 stories would fit in the print issue; the rest will live online.

On Thursday, Struble packed his car with 120 pairs of colorful sneakers and drove to New York so photographer Mitchell Feinberg could bring the concept to life.

"Everyone on staff came together to make this happen," Noftle told CNN's Jake Tapper and Brooke Baldwin.

Wolfson explained on the magazine's website that the cover is about "perseverance and unity."

"By itself, each shoe in the photograph is tiny, battered, and ordinary. Together, though, they create something beautiful, powerful, and inspirational," he said.

"Remove just one shoe and you begin to diminish, in some small way, the overall effect. Collectively, they are the perfect symbol for Boston, and for our response to the bombings."

Each person who donated shoes for the project will get them back, Noftle said.

As for the project's overall message: "It just represents that we're a strong city," Noftle added.